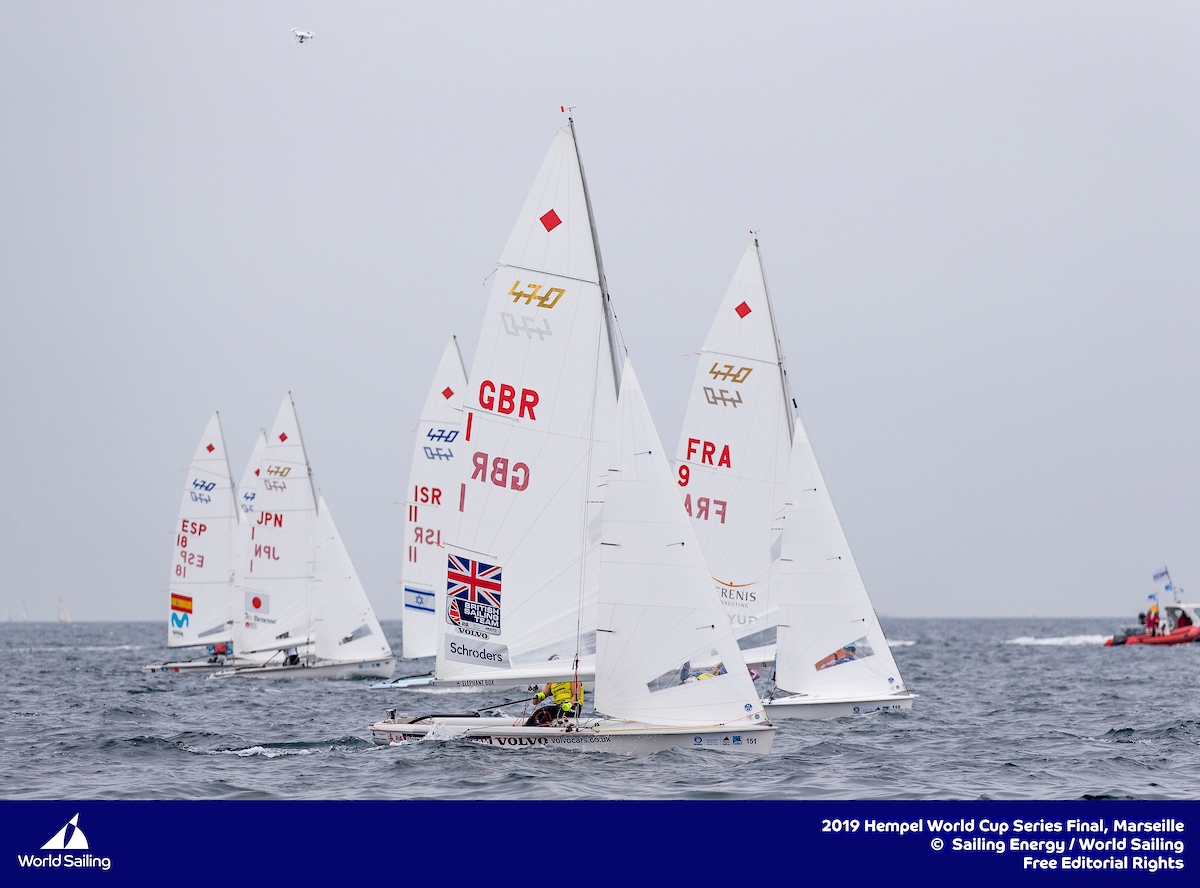 Last month I wrote about the folly (as I saw it) of the Dutch trials system which nearly saw the obvious first choice candidates – reigning World Champions Annemiek Bekkering and Annette Duetz – miss out on selection for Tokyo 2020. However, they survived their trial by fire and came through the Genoa/ Weymouth battle by the skin of their teeth.

My latest trip took me to the Hempel World Cup Sailing Finals in Marseille.

After rejoicing at the amount of breeze we had for the 49er/ 49er FX/ Nacra 17 Europeans in Weymouth, at last here was a World Cup event that was also blessed with breeze. If only there had been more boats to enjoy such epic conditions!

World Sailing had already read the writing on the wall, deciding at its recent Mid-Year Meeting to scrap the current format in favour of a return to ‘The Classics’ – the Kiels, the Hyeres, the Medembliks and Princess Sofias which have somewhat taken a back seat in recent years. It was an admirable idea to try to broaden the series around the globe, to try to reduce the gravitational pull of Europe as the obvious epicentre of Olympic campaigning.

But it hasn’t worked.

Santi Lange was complaining to me in Miami at the start of the year that the logistical challenges of the World Cup were impossibly expensive. Even the Nacra 17 Olympic Champion from Argentina said he wanted a return to a more European-based circuit. In fact, if you’re not from Europe – but from, say, South America, Asia or Oceania – perhaps you want a European-based circuit even more than the Europeans themselves.

Anyway, the poor turnout in Marseille for – let’s not forget – the FINALS of the Hempel World Cup Series, confirmed what had become increasingly obvious. We’ve got one more round of the World Cup to take us up to Tokyo 2020, then it’s a new format, of which I’ll report more in the future.

Actually, while some of the classes were really weak (eight Radial, just seven Lasers!), some of the Marseille fleets were close to full strength. Most of the big players were there in the Men’s 470, although that didn’t stop Mat Belcher and Will Ryan from winning their third consecutive World Cup title. The Australians met their match in 2016 when the Croatians Sime Fantela and Igor Marenic won the World Championship and the Olympic Games.

The Spanish team of Jordi Xammar and Nico Rodriguez and the Swedish double European Champions, Anton Dahlberg and Fredrik Bergstrom, are able to bring the fight to the Aussies on their day, but in Marseille Belcher and Ryan wrapped up the gold before the Medal Race.

In my view, the Medal Race is a failed format, in need of a revamp. The 470 Men’s race is a clear example of that. But occasionally the Medal Race is capable of delivering a really exciting finale, and we certainly got that in the Women’s 470. The reigning Olympic Champion Hannah Mills, with her crew Eilidh McIntyre, started the race just 1 point in front of the Olympic bronze medallist Camille Lecointre and Aloise Retornaz of France.

With the double-points format of the Medal Race, this was a straight who-beats-who scenario, especially because the gap back to third place was big enough to guarantee silver to the loser of the ensuing match race.

Mills looked to have got the better of the pre-start punch-up, but fluffed the final few seconds as the British boat stalled on the line, going briefly into irons as the French launched off the start and tacked to their preferred right-hand side of the course.

Mills and McIntyre recovered well from their brief error and pushed the French hard for most of the race, but it wasn’t enough as Lecointre and Retornaz picked up one of three golds for the host nation. Italy also scored three golds in Marseille which, by the standards of what we witnessed this week, will deliver a spectacular Olympic Regatta in 2024.

Some of the sailing in the big breeze and waves was full-on survival, and it was nice to see the oldest team in the 49er fleet – Federico and Arturo Alonso – show the kids the way round a rough race track.

The Spanish brothers, both in their late 30s, were the only boat to stay upright in the windiest race of the regatta, as only four boats completed the course in gusts of up to 37 knots. The Alonsos went on to win the week with the Medal Race to spare, against competition that included the reigning World Champions, Sime and Mihovil Fantela.

There was also an Open Kiteboarding event alongside the ten incumbent Olympic events. You can see why some traditionalists don’t want the kiteboarding anywhere near the rest of the sailing events – it makes even the 49er and Nacra 17s look positively pedestrian compared with the hyperspeed of these pocket rockets. Watching the kiteboarders launch off the beach and just seconds later be pushing 40 knots boatspeed was truly breathtaking. I can’t wait to see the boards competing in Marseille 2024.

Nico Parlier, son of the Vendée Globe legend Yves, is the current king of the young kiteboarding pack. He stood on the highest step of an all-French podium in Marseille.

When I asked him on camera afterwards how the French were so dominant, Nico shrugged and replied: “Most of the good guys weren’t here.” Great, thanks Nico! I’m sure your fellow Frenchmen appreciated your candid assessment of the competition. Sometimes it’s possible to be a bit too honest in an interview! Clearly skills of diplomacy have no bearing on a kiteboarder’s ability to rip around the race course at mind-bending velocities.