Skip to content
You are here
Home > Olympic Sailing > Olympic sailing: Andy Rice checks in after back-to-back events in Japan 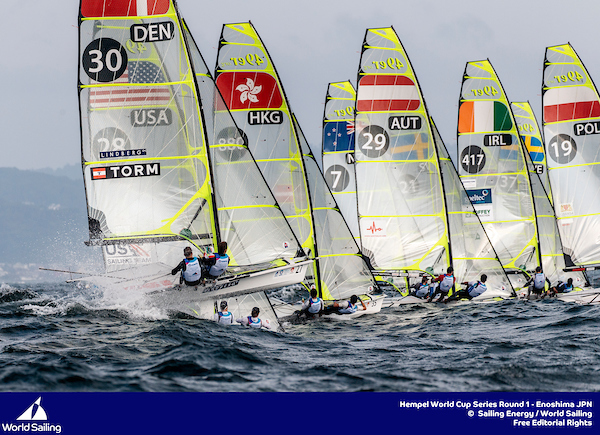 What would you rather have for your nation of choice: two gold medals from next year’s Olympic Regatta, or four silvers and two bronzes? By the brutally elitist gold-trumps-all method that the official leaderboard is calculated at the Olympic Games, China was top performer at the Olympic Test Regatta in Enoshima in a hot and humid August.

The event, dubbed ‘Ready Steady Tokyo’, is the clearest indicator yet of how the nations are lining up as the Olympic aspirants head into the final 12 months of the four-year cycle for Tokyo 2020. Top nation was China with two gold medals from the Men’s and Women’s RS:X windsurfer divisions, the only country to top the podium more than once.

The nation with by far the most medals was Great Britain with four silvers and two bronze, yet this six-medal haul would only put GBR in 10th overall behind all the other nations who won gold. The next most prolific medal winner was Poland with three bronzes from the men’s 49er, the men’s RS:X and the women’s 470. There were some notable medal-missers including Germany and the USA who failed to get on the podium at all.

One of the biggest surprises of Ready Steady Tokyo was that reigning Olympic Champion Giles Scott didn’t win gold in the Finn, the Briton having to settle for bronze behind the Dutchman Nicolas Heiner who took silver.

Zsombor Berecz already became the first Hungarian ever to win an Olympic class World Championship when he won last year’s Finn Gold Cup in Denmark. His performance at Ready Steady Tokyo, winning with a Medal Race to spare, suggests Berecz is a real contender for Olympic gold next year. However, Scott has been only part-time campaigning the Finn as he struggles to get in training time around his day job sailing for Ineos Team UK in the build-up to the 2021 America’s Cup.

Also, in the follow-up regatta straight after Ready Steady Tokyo, Berecz failed to get on the podium during a windier and wavier week at the Hempel World Cup Series, even though the fleet was severely depleted after a lot of leading lights had cleared out of Enoshima to take a well-deserved break following some energy-sapping weeks spent in heinously hot Enoshima.

Heiner, on the other hand, stayed on in Japan to upgrade his Test Regatta silver with World Cup gold, and looks like the bigger threat to Scott’s defence of the Olympic title.

Enoshima appears capable of delivering almost any kind of wind and wave combination, and it will take a true all-rounder to win a medal at next year’s Games. The Pacific swell can be monstrous, and monstrously challenging for the high-performance boats like the Nacra 17 and the 49er and 49erFX fleets. The older ‘white sail’ classes like the 470 and Laser, along with the Finn, looked much more comfortable in the big waves.

However, even the best were caught out by the steepness of the rapidly-rolling swell, notably Sweden’s Anton Dahlberg and Fredrik Bergström who were unable to escape the bottom of one particularly gnarly wave-set and nosedived and pitchpoled their 470 during the World Cup, a rare mistake which cost Sweden a place on the podium.

It’s going to be a thrilling Olympic Regatta to watch next year. Racing in 20 knots of breeze on the most inshore race course, the men’s 49er fleet were on the edge of control.

Spanish crewman Iago Lopez told me: “We had the gennaker up downwind, but I think we were flapping it about 80 per cent of the time.” Remember that crazy, controversial Medal Race at Qingdao 2008, when the Danish team won the unlikeliest of gold medals? It’s not quite as extreme as that, but not far off.

Two years ago, the conditions would have been considered unsailable for the Nacra 17, but such is the rate of learning and development in this foiling catamaran fleet, the best in the world made it look just about doable. However, there were days when the only fleets out there were the RS:X boards, wave-jumping spectacularly from crest to crest, along with the bulletproof Finns.

When you consider that the most breathtaking images to come out of Rio 2016 were from the 470s and the Finns, it does ask questions about the seaworthiness of some of the newer designs. And in the case of the Finns, should they be exiting the Games after Tokyo 2020? Enoshima could provide an amazing playground for the Finn to act out its last performance on the Olympic stage, and it could leave us wondering if the Finn should be given a stay of execution.