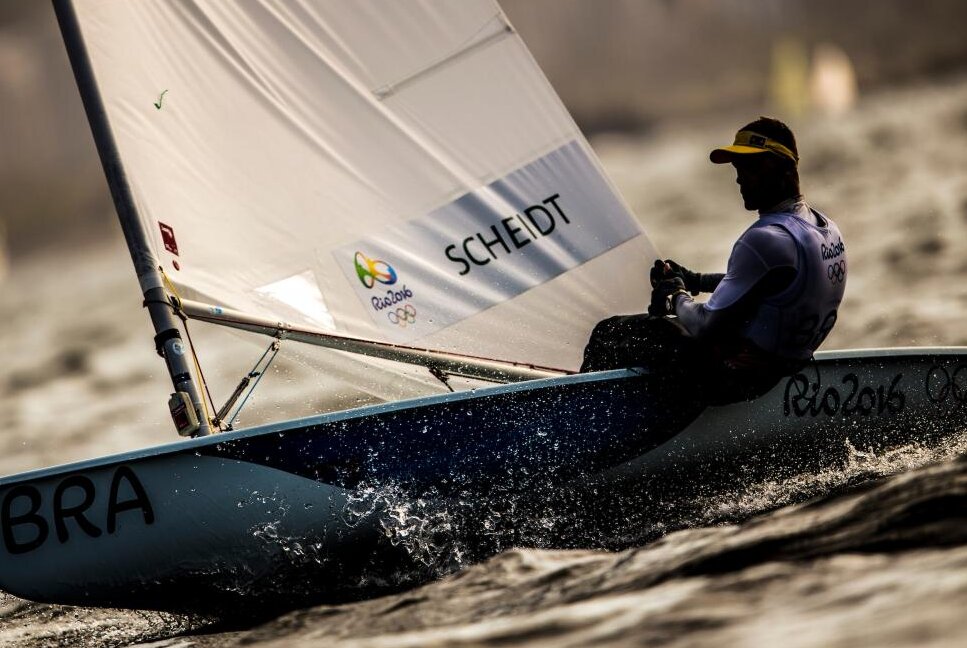 The simplest of all dinghies, and barely changed since it surfaced 50 years ago, the Laser made its first Olympic appearance at the Atlanta 1996 Olympic Games.

A 23-year-old Brazilian called Robert Scheidt narrowly won the gold medal in Atlanta ahead of Great Britain’s 19-year-old Ben Ainslie. Somehow, a quarter of a century and seven Games appearances later, the Brazilian magician will be vying for the podium yet again.

Winner of five Olympic medals and narrowly missing out five years ago on home waters at Rio 2016 where he finished an agonising fourth place, Scheidt is defying his age and setting out to prove that a 48-year-old can conquer athletes half his age.

“The competition is very tough and the boat is very demanding from a physical point of view,” says Scheidt.

“But I’m motivated to improve my competitiveness. I’m going to fight as hard as I can in Tokyo for another podium finish. Clearly it’s not so easy anymore because the years go by, but I think I can get to Tokyo in good shape. It was a difficult decision, because I stopped for two years after Rio, doing other things in the world of sailing, but now I’m going there with great commitment. I don’t like to go just to attend the event, I want to be ready and play for a medal once more.”

Even the dedicated Brazilian would admit that he is no longer considered the favourite for gold, however. Back in his heyday, the nine-time Laser World Champion started every regatta as the stand-out favourite. Then along came Australia’s Tom Slingsby who dominated for a few years, culminating in a straightforward cruise to Olympic gold at London 2012.

Burton embarked on another campaign for Tokyo 2020, yet just weeks after winning the Laser World Championship in 2019 the Australian selectors chose Matt Wearn ahead of the reigning Olympic and World Champion.

Wearn’s metronomically consistent performance across many major regattas – wins at the European Championships and Olympic Week in Hyéres, as well as second places at the Laser World Championships and the World Cup Series in Enoshima – was deemed the better bet for the Olympic berth.

“I am really excited to be able to go and compete for Australia,” says Wearn who is looking forward to the potentially massive conditions on Japan’s Pacific seaboard.

“Enoshima can have quite a big swell with bigger waves, which is similar to sailing off Sydney Heads. The wind tends to come off the land there, which makes conditions shifty and quite hot. We can recreate those conditions whenever there’s a hot westerly in Sydney, so it gives us confidence to be able to train in similar conditions at home.”

The field is wide open in this division, with at least 10 athletes who will be disappointed if they don’t make it to the podium. Among those would be France’s Jean-Baptiste Bernaz, fourth at last year’s Worlds and fifth at Rio 2016, and Norway’s Hermann Tomasgaard, sixth at the 2020 Worlds.

Then there are the previous medallists, not least Stipanovic who came oh-so-close to Olympic gold five years ago before his attempted match race against Burton went pear-shaped and the Croatian was forced to settle for silver.

Now aged 35, Stipanovic continues to train with other top Laser sailors including his good friend Pavlos Kontides (CYP) who first came to global prominence at London 2012 when he took the Olympic silver medal behind Tom Slingsby.

More recently he won consecutive world titles in 2017 and 2018. To this day, Kontides’ silver is the only Olympic medal ever won by a Cypriot athlete in any discipline, so it’s no wonder that Kontides enjoys ‘national treasure’ status on his Mediterranean island. The Republic of Cyprus honoured Kontides through the issue of a commemorative stamp. How many sailors can claim that kind of household fame!

Bronze medallist from Rio 2016, Sam Meech is back representing New Zealand at his second Games, not quite sure how things will pan out after so little international competition. “It has been really difficult [not racing] so it’s been a completely different buildup,” says Meech. “You’d normally be racing every couple of months, so you’d have your goals to work on from those races and you structure your year around those.

“We tried to do the same but just around training blocks and you take as much as you can from those. We have also been heading to Australia [to train with their best Laser sailors], which has helped, and treated them almost like regattas. We haven’t checked in with the Europeans since February last year so it will be interesting to see how they are all going.”

Philipp Buhl (GER) was disappointed to finish 14th at Rio 2016, but the German has remained dedicated to his craft. Winning the World Championships in early 2020 means Buhl goes to the Olympics as the reigning World Champion although a lot has changed in the past 18 months. At 1.87 metres tall, the athletic German should relish the big conditions that Enoshima can bring, although all-round conditions should suit him fine too.

When the pandemic struck, the British Laser squad grew tighter, realising that their best chance of success in Tokyo was if they worked together and shared knowledge and learning as openly and honestly as possible. That collaboration resulted in the British team taking the top three spots at the European Championships last year. But in the end, only one man can go, and that honour goes to first-time Olympian Elliot Hanson.

Hanson came to sailing almost by chance during a family holiday in Anglesey, but took to the sport like a duck to water. He moved swiftly through the club ranks and won the Topper World Championship at the of 14 after only three years in the boat. Since then, victory at last year’s European Championship and fifth at the Worlds make him a serious contender to follow in the footsteps of Sir Ben Ainslie and Paul Goodison who respectively won Olympic gold for Great Britain in 2000 and 2008.

So many nations compete in the Laser fleet from all parts of the world. Representing one of the largest nations, but a small nation in sailing terms, is Vishnu Saravanan who flies the Indian flag on his seven square metre mainsail.

Non-sailors perhaps don’t appreciate the strength required to hike out a Laser as relentlessly as they do at Olympic level. “If you can hold a plank for 50 minutes you will be okay,” jokes the 22-year-old who serves in the Indian Army.

Sailors use core and lower body strength to make sure the boat stays as flat and as fast as possible. Lockdown forced Saravanan off the water for a while, and he had to look for more creative ways of staying fit and strong, such as when he tied himself to the back of a car and pulled it. “I did that to improve my back and core strength,” he says. “But the car was too light. My coach had to keep applying the brakes [to increase the load]. Maybe next time I can try it with an Army truck!”

Andrew Lewis carries the goodwill of Trinidad & Tobago with him as he competes at his third Olympic Games. He wants to use his profile to help build a legacy of sailing back on his Caribbean island. “

Trinidad and Tobago is small but mighty,” says the 31-year-old. “The sport of sailing is small but, thanks to the vision that I shared with my father [David] and he shared with me, one day you’ll see a lot of white sails on the foreshore.

“When I return with silverware, hopefully, my role is to, pretty much, hand over any success I achieve. It’s not for me. You cannot take any medal to the grave. It’s for this country.”

Racing in the Laser fleet will commence at 14:30 on the Kamakura racing area on Sunday 25 July. The 35-boat fleet will sail ten races ahead of their Medal Race on Sunday 1 August.