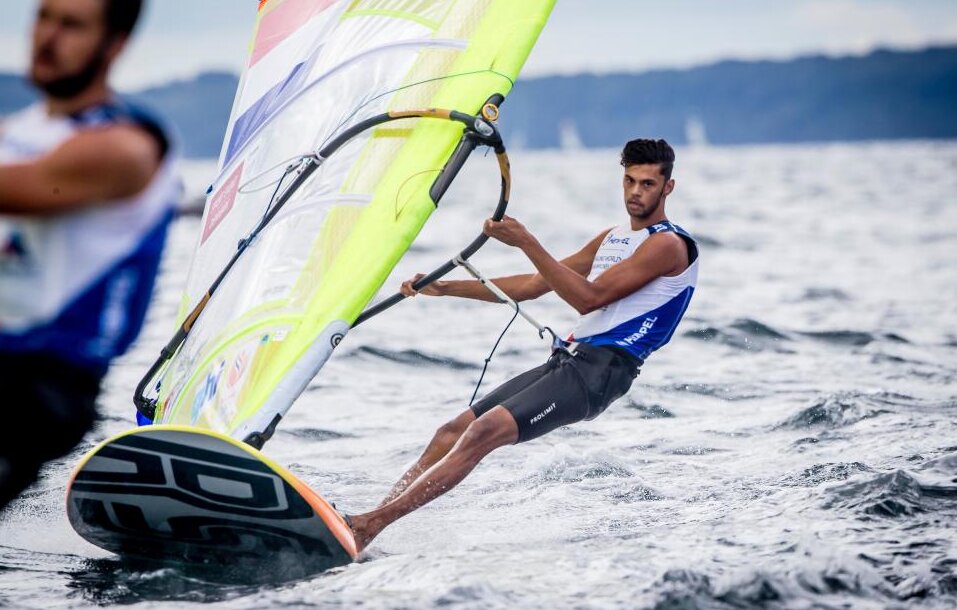 For World Sailing, Andy Rice previews the runners and riders in the Olympic RS:X Men’s Windsurfing discipline which begins later this week at the Tokyo 2020 Olympic regatta in Enoshima, Japan.

Winner of the past three RS:X World Championships, Kiran Badloe (NED) is the clear favourite for Men’s Windsurfing gold at the Tokyo 2020 Olympic Sailing Competition and with Lilian de Geus in the women’s division it could be a Dutch Double victory.

It can also pay to be tall, which was part of the reason why Dorian van Rijsselberghe, at 1.9m, was able to dominate the past two Olympic Games in 2012 and 2016. The Dutchman was working towards a third Olympic gold for Tokyo but lost out in the selection trials to Badloe, his good friend and close training partner who goes to his first Games.

Dutch dominance in men’s windsurfing goes all the way back to 1984 when Stefan van den Berg took the first ever windsurfing gold medal at Los Angeles. In 2021, Badloe knows he is seen as the man to beat. “Of course I know that people see me as the favourite, but to be honest I don’t care much about it,” commented the Dutch Windsurfer. “I know better than anyone that there can be so many factors that can throw a spanner in the works. I just do my own thing and generally it produces good results. Let’s hope it’s the same in Japan now.”

Second at both this year’s World and European Championships, Mattia Camboni (ITA) has benefited from an extra year’s build-up to Tokyo and looks well placed to win a medal for Italy. Camboni is taking nothing for granted, however, and despite his recent success maintains a child-like enthusiasm for his windsurfing. “I’m having the best year of my life, vice World and European Champion behind Kiran. I’m really happy with my results, this year I think I’m doing really well, can’t wait to go to the Olympics. I got silver at the Test Event, so I think I’m ready to go to Olympics, I can’t wait.”

What was a distant dream a decade ago has become a sparkling reality for the bright-eyed 25-year-old Italian. “In 2012 I had the honour to train with [four-time Olympic medallist] Alessandra Sensini for her last Games in London. She called me up and asked me to be her sparring partner.” Initially, just training with Sensini was enough for the teenager, but then he wanted to compete at the Games. “I understood this is what I want to do, it was a dream come true.”

At Rio 2016 he had few expectations. “I went there only for a good experience, I didn’t have a goal, just have fun, maybe understand more about it. I finished 10th, it was an honour to do the medal race, good for my first Olympics.”

Now Camboni is aiming much higher. “I hate to lose. If I do, I always say I will go home and train even harder. I never give up, and this helps me come back from bad situations. This time I would really like a medal.”

More than 10 years older than Camboni is Byron Kokkalanis of Greece who finished close behind the Italian at this year’s Worlds for third place overall. A Greek windsurfer of partly Filipino ancestry, Kokkalanis competes at his third Games, having finished sixth at London 2012 and fifth at Rio 2016.

Another veteran in his late 30s but coming from a strong Polish squad is Piotr Myszka who won the World Championships as far back as 2010 and again in 2016. Having finished fourth at Rio 2016, Myszka is pulling out all the stops to win an Olympic medal to round off a glittering career on the RS:X.

There are a few countries where winning Olympic selection is almost as tough as competing at the Games. Emerging from a strong Chinese squad is 25-year-old Kun Bi, who showed he has good skills on the challenging Olympic waters when he finished second at the Hempel World Cup Series in Enoshima 2019.

Similarly in the French selections Thomas Goyard had to fight hard just to earn his place in Tokyo and looks to at least match – if not improve upon – Pierre Le Coq’s bronze medal at Rio 2016. Now aged 29, Goyard took to windsurfing at the age of eight when living in French Polynesia and then spent his formative years in New Caledonia until moving to France at the age of 18. He’s also a formidable force on the PWA World Tour.

Israel has a strong history in Olympic windsurfing and Yoav Cohen’s victory in last November’s European Championship puts him in the frame for the podium.

Following the retirement of Nick Dempsey, after winning three medals from five Olympic Games for Great Britain, it’s down to Tom Squires to fly the British flag in Tokyo. He learned to windsurf on a shifty reservoir far inland near Oxford, which could stand him in good stead if the wind blows offshore at Enoshima.

“The venue is super-tricky. The wind isn’t quite what it seems. It looks like a nice onshore sea breeze, good for speed-racing, but in reality it feels like an inland lake. The windsurfers mainly race close to the shoreline and the wind is so unpredictable. It’s tricky to know which way to go.”

Switzerland’s Mateo Sanz Lanz can barely disguise his excitement as competition draws near.

“I feel pretty good a few days before the start. On the water, I improved my performance by working with a strong team. On land, I try to get that extra form by working on endurance and a bit of peak strength. In my mind, I’m starting to feel more and more emotions as the Games approach, but I’m staying focused because Japan has very specific conditions in store for us. It will be a challenge, for sure, but at least it will be the same for everyone. At the same time, we will follow very strict rules, staying in isolation most of the time.”

Badloe says humidity will play a big role in the outcome for these athletes working so close to physical exhaustion. “Nowadays a big part of our repertoire is physical ability. There are going to be races that the guy that wins is the guy that can pump the most. The heat and humidity play a big factor in your physical state. If you are prepared for it and able to deal with it better than your competitors, you have a physical advantage assuming that we’re all equally as fit.”

He doesn’t underestimate the challenge of following in the wake of his friend and double Olympic champion Dorian van Rijsselberghe.

“I do notice that people have high expectations of me, although it’s mostly people that don’t know the sailing sport that well. Everyone who is familiar with our sport, knows that anything can happen and that results of the past are no guarantee for the Games. All I can do is prepare as well as I can and deal with all the conditions and situations that we get given during the event.”

The Men’s Windsurfing – RS:X fleet will feature 25 sailors. They are scheduled to start racing at 12:00 JST on Sunday 25 July on the Enoshima racing area. They will sail 12 races in total with three reserve days. Their Medal Race is scheduled for Saturday 31 July.