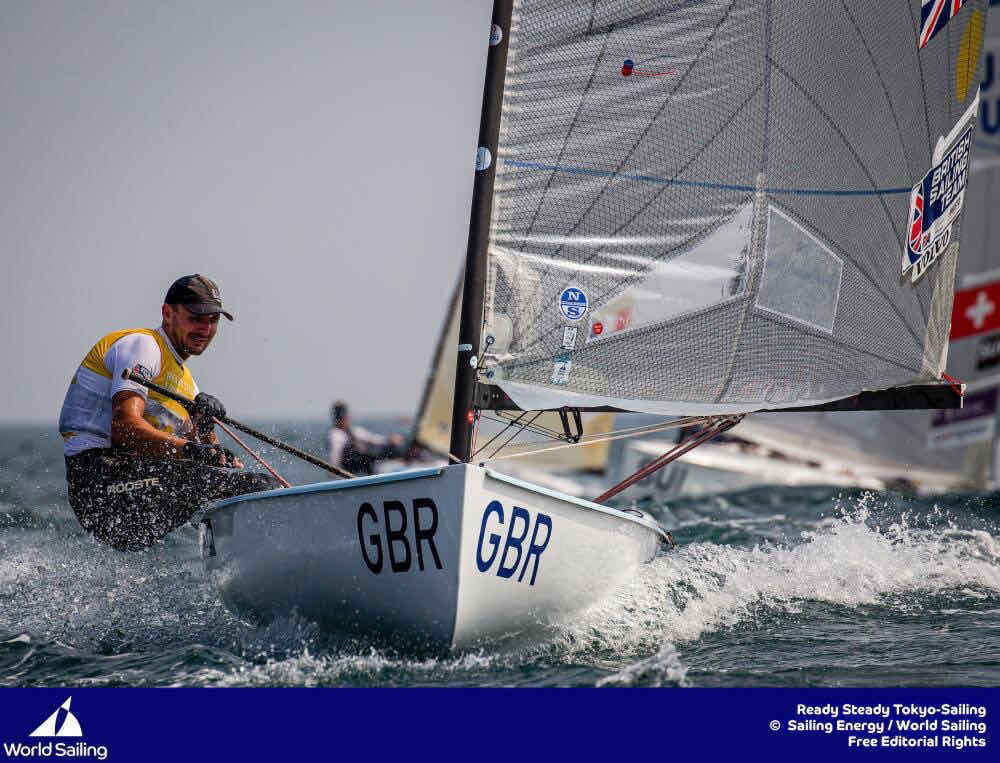 Andy Rice previews the potential action in the Finn Class at the Tokyo 2020 Olympic regatta set to take place in Enoshima, Japan.

The Men’s Heavyweight Dinghy – The Finn – is the oldest boat at the Olympic Games, making its debut at the 1952 edition when Denmark’s four-time Olympic Champion Paul Elvstrom won the event in Helsinki.

For the past two decades, Great Britain has won this event at every Games since 2000 when Iain Percy took gold on Sydney Harbour. Sir Ben Ainslie won three consecutive gold medals from 2004 to 2012 before passing on the baton to Giles Scott who won in Rio 2016. While Scott was the clear favourite for the last Games, this time the Briton really has his work cut out if he’s to defend the title.

In 2019 New Zealand’s Josh Junior became the first ever New Zealander to win the Finn Gold Cup, the first Kiwi to win in the long history of this prestigious regatta. Despite his compatriot and training partner Andy Maloney winning the most recent edition of the Finn Gold Cup, Junior narrowly won selection ahead of his friend who goes to the Games as Junior’s coach. Imagine that! The reigning World Champion – as your coach.

There are many other serious challengers to Scott’s crown, but the 34-year-old will not lie down without a fight. After dominating the four-year cycle into Rio 2016, his preparation for Tokyo has been more fragmented because of America’s Cup commitments. However, the defending Olympic Champion has four Finn Gold Cups under his belt, and is still the most successful sailor in the fleet. At 1.98m, he’s also one of the tallest.

Scott openly admits that his time with INEOS Team UK, training and racing alongside Sir Ben Ainslie, was a distraction in many ways. But he’s looking to draw the positives for his defence of the Olympic crown.

“I think a lot of the other guys are reasonably competition hardened but they’re probably not too hardened on the focus and the amount of external pressures that get put on you at the Olympic Games,” explained Scott.

“That’s where the America’s Cup will help me because you get hardened to dealing with adversity.”

Scott will have that mental toughness in spades, and his boat speed will be good too. A second place at this year’s European Championships shows that Scott is very much in the frame for the podium, and quite possibly for the gold again.

Like Scott, Junior was a dedicated participant in the recent America’s Cup, and was on board Emirates Team New Zealand for their two victories in 2017 and 2021. Unlike Scott, however, the successful Cup campaign seems not to have distracted him from the Olympic program but to have enhanced it. Seventh at Rio 2016, Junior looks in much stronger form this time. He is one of the big favourites for a podium finish in Tokyo and could even emulate that other serial America’s Cup winner, Sir Russell Coutts, who won Finn gold for New Zealand back in 1984.

Although the Finn is a one-person dinghy, in many ways 31-year-old Junior will be helming his boat with Maloney as his wingman. These guys are so close, Junior was even best man at Maloney’s wedding. The closeness of this partnership will be a massive psychological boost for the Kiwi assault on the Finn gold medal.

“Rio for me was a little bit disappointing,” says Junior. “And I think out of that, I learned some big lessons and, and realised that I need someone like Andy around. So you know, Andy, and I managed to form an amazing partnership together. And, you know, we both became world champions. And, you know, it’s something pretty special. And I think that what we’ve learned off each other, and how we complement each other has been really good. So the steps we’ve taken has given us a lot of confidence to race well, and, and, you know, we don’t expect to go well, so we’re really looking forward to the challenge and can’t wait to get to Tokyo.”

Zsombor Berecz won the world title in 2018 and the Olympic Test Event in Enoshima in 2019, and bids to become the first ever sailor to win a gold medal for Hungary. Earlier this season the 34-year-old won the European Championship with a race to spare.

Berecz has competed at the Games on four occasions and represented Hungary in the Laser class in Beijing 2008 and London 2012. In the smaller one-person dinghy Berecz failed to make much of an impact on the front of the fleet, but once he made the transition to the Finn he discovered a boat that suited his skills and his physical strength. Rarely out of the medals over the past three years, all of Hungary watches and hopes that Berecz will create a piece of Hungarian sailing history in Tokyo.

The youngest Finn competitor in Tokyo is Joan Cardona who only recently qualified his country, Spain, for the last spot on the start line with a spectacular second place at this year’s World Championship. This makes the 23-year-old an outside bet to upset the more experienced competitors in the Finn fleet. A three-time U23 European Champion, Cardona looks ready to step up to the biggest stage and possibly challenge for a medal.

In 1996 Roy Heiner won a bronze medal in the Finn for the Netherlands and now his son, past Laser World Champion Nicholas Heiner, aims to at least match or better his father’s performance exactly a quarter century later.

Although the younger Heiner won the Laser World Championships in 2014, two years later the Dutchman decided to switch to the bigger, heavier Finn. Since then he has been pushing the front, but has yet to secure a major win, despite a string of medals, including second at the 2019 Gold Cup. Coached by his experienced father, Nicholas has a very realistic shot at a medal.

Max Salminen (SWE) knows how it feels to win Olympic gold, having crewed Freddie Loof to victory in the Star Keelboat at London 2012. After London, Salminen switched to the Finn and won the 2017 Gold Cup. The Swede’s form has been inconsistent in recent times, however, with a 17th in the Gold Cup and sixth in the Europeans. But now, going to his third Games, perhaps that experience will help Salminen when he needs it the most.

Tokyo will be Jorge Zarif’s third Olympic appearance after a fourth on home waters in 2016 and a 20th in 2012. The 28-year-old Brazilian became the only person to win the Finn Silver Cup (Under 23 World Championship) and Finn Gold Cup in the same year in 2013. Zarif has struggled to replicate that kind of blistering form in recent years but remains an outside bet for a medal.

South Africa’s Leo Davis will be content if he can make it into the Medal Race. He secured the African continental place at the 2021 Finn Gold Cup but knows he’s unlikely to be threatening the podium. Davis had initially dreamed of representing the country at the Games in rowing but was eventually named as the reserve to the heavyweight pair that competed in Rio five years ago. After four years training with the high-performance squad, in 2018 he switched watersports, with a view to competing in Tokyo in sailing.

Explaining his transition between the sports, Davis said, “Luckily I had been sailing at a very high level before rowing took over and I managed to keep sailing whenever my rowing training allowed, so getting back to professional sailing was an easy transition. Rowing and sailing are both leg-orientated and highly physical sports. Many of the professional Finn sailors use the rowing machine in their cross training as the downwind pumping resembles the rowing stroke and is great for a cardio-vascular training tool.

“I was able to use all the knowledge about nutrition, training programmes, recovery and adaptation that I learnt from the national rowing team to assist my sailing training and racing. I feel that the way an athlete approaches their sport and their mindset to achieve is transferable between all sports and other aspects of life,” adds the 29-year-old.

“I’m really excited to have qualified South Africa for the Olympics. It has been my dream ever since I can remember to represent my country at the top level.”

Davis had a taste of the Olympic Games at a young age when his father, Greg, travelled to Atlanta in 1996 as a coach to South African Finn sailor and America’s Cup veteran Ian Ainslie. “From when I was a child, I would try on my dad’s Olympic kit and imagine wearing the South African colours at the Games, so to do that together would be very emotional,” says Davis, whose dad goes to Tokyo as his coach.

With a fleet size of 19 competitors, the Finn is one of the smallest in Tokyo. Their first race will be on the Kamakura racing area on Tuesday 27 July with the start gun scheduled for 1300 JST. Ten races will follow and the Medal Race on Tuesday 3 August will decide the podium.