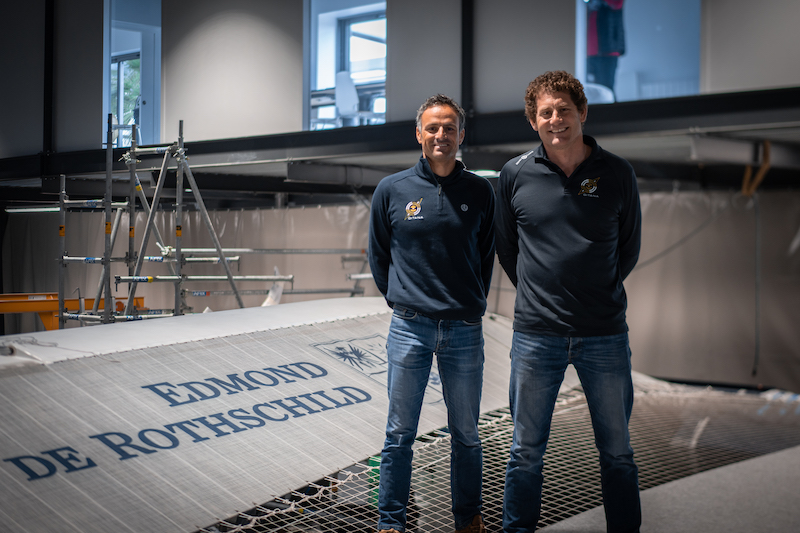 The French ocean racing syndicate Gitana Team has made the unusual move of choosing not one but two big name skippers for its state-of-the-art Ultim trimaran, Maxi Edmond de Rothschild.

This week the team named Franck Cammas and Charles Caudrelier – two of the highest profile ocean racing skippers on the planet – as their chosen duo, along with a five-year schedule of ocean races and record attempts leading up to the 2023 singlehanded Brest Oceans Race.

The announcement ends weeks of speculation over who would replace outgoing skipper Sebastien Josse who earlier this year parted company with the team after eight years as skipper.

Appointing two skippers is an unusual but innovative solution to finding a replacement for Josse and one which – according to an official press release – heralds a new focus on fully-crewed racing from the team.

Rumours of who Josse’s replacement might be had been rife over recent months with Cammas, Caudrelier and British solo skipper Samantha Davies – among others – all speculated over.

Since winning the Volvo Ocean Race last year as skipper of Dongfeng Race Team, Caudrelier has made no secret of his desire to join the Ultim circuit.

This will not be his first time as a Gitana team member, having sailed as co-skipper of the team’s MOD70 trimaran in the 2013 Transat Jacques Vabre.

“I’m very familiar with the Gitana team having sailed in it between 2013 and 2016 with Sébastien Josse,” Caudrelier said. “I know its strengths and weaknesses and I know how the team operates.

“Franck will bring a new take on proceedings, a new way of doing things. He’ll re-energize the team because we know he always pushes the envelope. He’s a mover and shaker, in the finest sense, who is always keen to innovate and drive a project forward.

“Franck has a massive amount of expertise and technical know-how, whilst I know how to create a mindset and lead men.”

How this major new role with Gitana Team will impact Caudrelier’s recently announced status as Figaro 3 skipper at OC Sport’s recently opened Le Hub facility in Lorient is not clear.

Cammas meanwhile has been away from the ocean racing world since his Volvo Ocean Race win in 2011-12 – a victory he shared with Caudrelier as one of his watch captains – spending much of his time in the intervening years as skipper of the French America’s Cup team.

He too has a current commitment to manage, having in February of this year announced he had partnered with Oman Sail to manage their European sailing operations – and in particular to help train two Omani sailors to a level good enough for them to compete on the highly competitive La Solitaire Figaro circuit.

It is well known that Cammas has been planning a return to ocean racing. He has reportedly been formulating plans to mount a challenge for the 2021 edition of The Ocean Race and has actively been chasing sponsors over recent months.

“I’ve agreed to share this project with Charles for two key reasons,” Cammas said. “The first is that it’s an exciting project with a well-designed boat with which we’ll be able to evolve in an interesting class with a high-performance team.

“The second, obviously, is that Charles and I know each other inside out. We’ve done a lot of sailing together and we’ve built some fine victories together. I really trust his intellectual honesty and the brainstorming we can do together.

“We know that we’ll never hide things from one another and that we’ll always try to help each other. Each of us is fairly humble with regards to what we need to do and our environment. I really like his mindset and his way of working so this arrangement suits me down to the ground.”

The Gitana Team Ultim multihull last raced in November 2019 with Josse as skipper in the Route du Rhum singlehanded transatlantic race. The team’s participation was brief however with Josse being forced to pull out within the first 48-hours after the trimaran’s starboard bow broke off in stormy conditions in the Bay of Biscay.

Since then the boat has undergone a winter refit in Lorient and next month will have her new starboard bow fitted and be ready for action.

Cammas will skipper a fully-crewed challenge for the 605-mile Rolex Fastnet Race this August, however the boat’s first competitive outing with both Cammas and Caudrelier aboard will likely be this November in the 14,000-mile doublehanded Brest Atlantiques.

This is a race newly created for the Ultims after the Transat Jacques Vabre organisers banned the class over safety concerns following carnage in the fleet during last year’s Route du Rhum.

In the summer of 2020 Cammas will take on the singlehanded Transat Race, as well as skippering an attempt to set a new north Atlantic crossing record. Later, in the Autumn he will lead a fully-crewed attempt to win the Jules Verne Trophy for the fastest non-stop lap of the planet.

The team is billing 2021 as the handover year when Caudrelier will join Cammas to co-skipper the boat for The Arch – a planned Mediterranean tour of Europe with stopovers (crewed) – as well as a fully crewed around the world race leaving from the Mediterranean.

2022 has been set aside for Caudrelier to mount record attempts on the North Atlantic crossing and the Discovery Route (Europe to South America), before taking on the Route du Rhum singlehanded race.

2023 meanwhile will see Caudrelier stage more record attempts in the build-up to the Brest Oceans Race – a singlehanded non-stop around the world race with up to six boats competing – including the likes of Francois Gabart, Thomas Coville, Armel Le Cléac’h, and Yves Le Blevec.