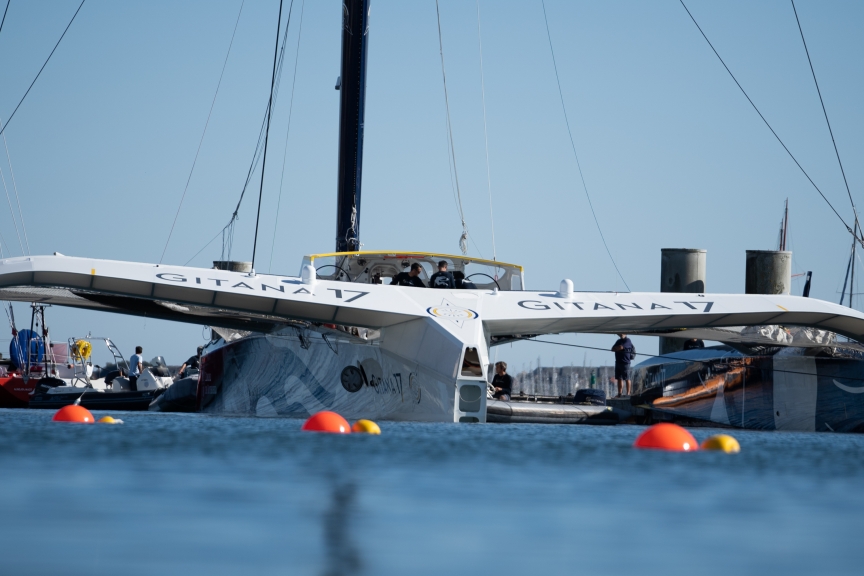 Gitana Team’s Ultim maxi-trimaran Edmond de Rothschild has emerged from the shed at the French team’s technical base sporting a very noticeable addition to its aerodynamic profile – an aft beam fairing package that is predicted to deliver a one knot speed advantage on certain points of sail.

Franck Cammas – joint skipper of the revolutionary 32-metre multihull along with fellow-countryman Charles Caudrelier – is a firm advocate of such fairing solutions, having installed similar systems on both the front and aft beams of his Groupama 2 multihull back in the late 2000s.

“This fairing of the aft beam was part of the initial design for the Maxi Edmond de Rothschild and Guillaume Verdier had even considered the forward and aft beam as sections of aerodynamic geometry,” Cammas said.

“The aerodynamic CFD studies showed a real benefit in making this addition and the timing was right so we didn’t have to think twice about going ahead with it.”

“Gitana’s strength and that of Guillaume Verdier was to imagine and build the Maxi Edmond de Rothschild with this aerodynamic vision incorporated in it, which effectively means we can make improvements today that are coherent with the boat.”

This type of fairing has been commonplace on the last few iterations of America’s Cup boats, but it’s the first time that an offshore racing team has installed a structure of this kind on a boat dedicated to the open ocean.

“Godzilla – the multihull with which the Americans from Oracle won the Cup in Valencia – was the first to brave this new development,” Cammas said. “After that all the AC 72s and more recently the F50s in the last Cup were fitted with them.

“In our case, it’s more the implementation and the realisation which prompted studies, because contrary to the America’s Cup boats, we cannot allow ourselves to dismantle or redo the system every evening.

‘As a result, our challenge centred on solidity as we needed to come up with a structure capable of withstanding days and days of sailing at high speed. The timing seemed right to us, especially as the addition of this fairing has no impact on the reliability of the Maxi. If it were to be damaged at sea, that would of course be regrettable, but it would have no influence on the intrinsic performance of the boat.”

So how exactly does the new fairing boost the performance of the boat?

As Cammas explains, the new structure “not only reduces the drag by pulling the flow of air tightly around it – but it also creates lift’ effectively making the platform more lightweight.

“This fairing was made of Oratex and it’s a flexible canvas akin to what you find on glider wings or microlights,” Cammas goes on. “It represents an additional surface area of around 32square metres and weighs in at nearly 50 kilogrammes. In optimum conditions, studies predict a gain of over one knot at 30 knots of boat speed.”

This latest optimisation to the boat came after two months of research work and computer modelling. Seven versions of the fairing were built, and three manufacturing plans were put forward before the final option was chosen. In all, 10 Gitana team members were involved in the project.

The trimaran’s relaunch marks the resumption of training for the sailors and starts the clock counting down to the Brest Atlantiques race starting on November 3 this year, when Cammas and Caudrelier will take on three other Ultim pairings in a 14,000-miles race around the Atlantic.

A joint training session is lined up with Francois Gabart’s MACIF team in early October.