Skip to content
You are here
Home > Advertorial > North sails: (Using) the right tools for the job 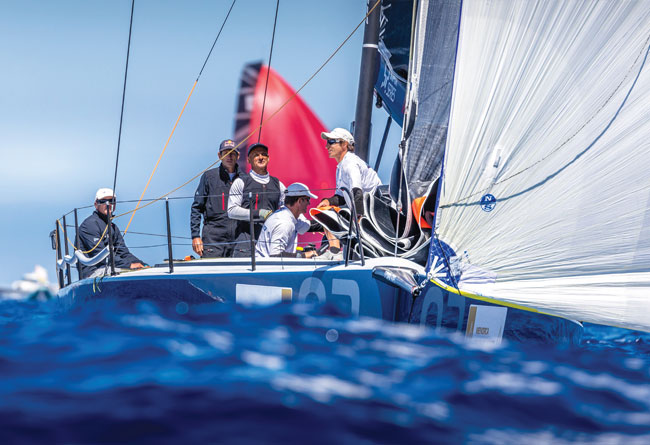 After three decades of development and investment, the North Design Suite is able to produce reliably fast sails, that keep their shape, leading the way in modern sailmaking tools.

The legendary figures in the history of sailmaking made their reputations by having a keen eye for recognising what they knew from experience to be fast shapes. Their methods to achieve this were mostly variations of the long process of trial and error, where proven fast shapes were first recognised and then catalogued for later reproduction. Some were more rigorous than others at this process, implying that the trade of sailmaking was more art than science.

With an engineering background, Lowell North was a pioneer half a century ago in developing this process with more rigour and detail than his peers and embracing the important role that complex computational tools were to have in transforming ideas developed about 3D shapes into the reality of cutting panels in 2D. Along with this, a thorough understanding of the material properties of sailcloth was needed so that when assembled, those panels could predictably hold their shapes. North’s mastery of this made them an early leader in the field of computational sail design built mostly on developing their own tools in what’s now known as the North Design Suite.

Leap forward to now after three decades of development and investment in these tools, and we can marvel at the astounding computational power available to reliably produce not just fast shapes out of the box, but sails that remain fast as well. The software in the North Design Suite not only models sail shapes in detail for production purposes, but these shapes are the product of a complex process where everything that affects that sail while in use is now also modelled within North’s Flow and Membrain programs: stiffness of the mast and rigging, sheet tensions and sheeting angles, luff tension, leech tension, etc. can be characterised as the sail is virtually brought through a broad range of wind angles and speeds.

And the advent of bespoke fibre sailcloth construction for upwind sails that started with North’s 3DL technology 27 years ago has since evolved in sophistication and now there are many more fibre types available – such as carbon and Dyneema – that provide the strength used in 3Di technology. With 3Di construction, an advanced composite structure is now possible to better handle all loading scenarios. North’s software has also evolved to where deformation of shape can now be made not only predictable, but manageable through clever engineering and design.

Likewise, for offwind sails, what started as a catalogue of flying shapes tested in the Twisted Flow Wind Tunnel at the University of Auckland two decades ago has become a simulation program called the Virtual Wind Tunnel, which is used to observe laminar and turbulent flow of offwind sails as a tool, to better understand flying shapes and how they change through varying wind conditions.

Flying shapes can now be coupled with North’s own Velocity Prediction Program (VPP) to model their effect on boatspeed. And to refine this even further, North has also been at work for some time with support from the Sailing Yacht Research Foundation (SYRF) on a comprehensive Performance Prediction Program (PPP) that can be used to iterate through not just sail sizes, but shapes as well to accurately predict their effect on performance.

Putting the tools to work: Collaborative partnership
The strong reputation North has developed over the decades is based on having organised feedback loops from its sales experts, sail trimmers and customers back to the sail designers, who in turn could adopt and adapt this important information into their design work. Now their role has become more complex and has evolved into a performance consulting service that can become an added value to North customers, whether working directly in a grand prix environment or benefitting indirectly from how those innovations may become adopted through the broader fleet.

Take for example a customer who has an interest in building a new 65ft boat that will race primarily inshore on day races, with the occasional short offshore race. He and his project manager and naval architect would derive great benefits by meeting with the North Design Services team at the very outset of the project to collaborate on how to help efficiently transform ideas to expectations and then on to realities even before lines are drawn.

‘We first need to understand some basic parameters in the design of the boat,’ says North’s head of design and engineering, JB Braun, ‘like righting moment, centre of effort in the sailplan, and whether a fixed or rotating mast is planned. Then, with our rig design software, we can start the design iteration process. With our experience and from being involved at an early stage, we can not only provide answers, but also help shape the relevant questions that arise to help the client define their goals. This becomes a real partnership, whose mission is to deliver performance in line with the definition of the project. Working through this is where we can help clients explore options in the available design space since we have tremendous experience and a huge knowledge base from many different fields.’

With this approach the team at North are also able to assist clients competing in a contrasting situation like the TP 52s – the 52SuperSeries formats are fixed and the boats and class rules are highly evolved and extremely tight. The best teams on the best boats therefore make a winning edge in performance very difficult to find, so this pushes everyone to their limits looking for some incremental advantage. North team member Dave Lenz, who is based in the UK and is a regular observer and coach on this circuit, says, ‘so much of our strength comes not just from the software and design tools, but in knowing just how they can be put to use alongside our observations. We spend hours and hours on the water analysing everything related to performance in the 52 class so we know how the data can be used in context to refine our tools to explore new ideas.

North’s ongoing association with successful teams in this and numerous other classes and events is an important core strength, since all members of the team can benefit from the contributions made to the knowledge base. The value of these are not just at the front end of new projects, but insightful debriefs held during and after projects are complete are also vitally important. Imagine, for example, all that North learned from their experience in two multiple cycles of the Volvo Ocean Race, the numerous course records set by Comanche and other first-tofinish programmes, the Imoca 60s and other trans-oceanic classes, and how that is put to use in every new sail built to race offshore?

Not to mention the America’s Cup, which is pushing toward the next generation of sails in an attempt to marry the practicality of a “soft” carbon sail with the performance of a “hard” wing. The solutions arrived at and the process of engineering and design is very relevant throughout sailing, which is why so many of North’s talent base are involved with teams in every cycle. This includes Burns Fallow who is embedded with Emirates Team New Zealand, Gautier Sergent who is with INEOS Team UK, while Michael Richelson and Juan Garay are at Luna Rossa.

These projects often have a single point of contact on the North team, who can then reach out to the broader North group of experts to get help when needed in a collaborative style that Lowell encouraged in the early days and is very much in the DNA of the company. And with that group also now including sparmakers and riggers at Southern Spars and Future Fibres, that reach goes very deep indeed into the knowledge base.

‘This communication across the group has made huge progress in the last few years,’ says NZL-based veteran sail designer Mickey Ickert. ‘We’re getting really good at having an open string of communication among team members and a stream of valuable info from both the design and sales forces.’

The importance of this process cannot be overstated – teams in the Grand Prix arena have dedicated professional sail trimmers who collect and manage the settings and performance data, so North has developed the protocols and tools to best digest their valuable input.

Having been both a sailmaker and pro sailor for decades himself, North Sails president Ken Read says he’s impressed with what the design group has developed with their tools, such as the new HELIX approach to designing and building the next generation of performance sails. The use of Load Sharing Technology to produce a new generation of selfsupporting sail structures is “nothing short of being a game-changer”.

‘I sat in on a meeting of the design group recently, and I hardly understood what they were saying,’ Read said. ‘This is how I know I’m doing my job, having guys this smart working on innovation. And I’m really encouraged that we have new members of the team fresh out of school that are really familiar with the latest ideas and the software tools to pursue them. This is great news for the future.’