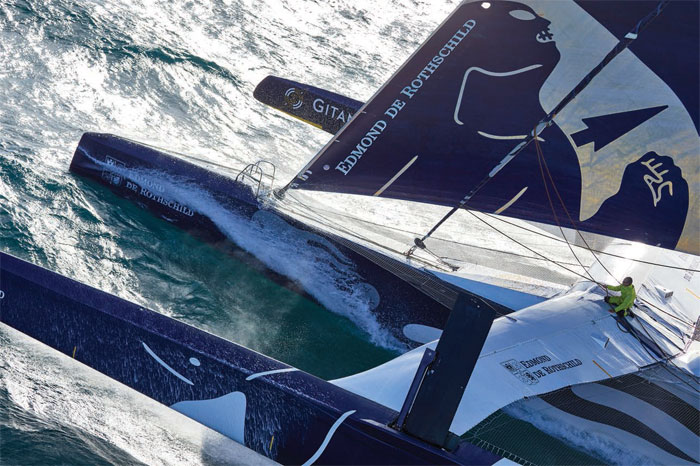 North Sails Performance clothing delivers ‘3DL technology for humans’ – and some of the world’s fastest humans at that.

‘Our first year has been an outstanding one for us,’ says North Sails Performance director, Nigel Musto. ‘We’ve been delighted that several of the world’s top sailors, on board some of the most exciting boats – like the Gitana Team – have chosen to wear our kit. In particular the performance of 4DL, our “4-layer durable laminate” reinforcement, was way beyond even our own expectations and the feedback has been superb.’

In the competitive world of offshore clothing it would be easy to dismiss such enthusiasm as being the talk of the trade. But Nigel Musto’s hands-on approach and considerable racing and clothing experience is well known. When he talks of a breakthrough it’s worth taking note. But to understand why the new approach is so effective it’s important to understand a few background matters.

‘When we started the North Sails Performance project in 2018 we set out to solve several issues that the marine clothing industry has never been able to resolve. One was the problem of leaking knees and seats. Historically, when creating a robust garment that’s resistant to being torn or damaged by the anti-slip surface on decks, and other snagging points around the boat, it’s been common to put a Cordura patch over the top of the Gore-Tex fabric and then sew that patch into the side seams, but there are several problems with that.’

‘The Cordura patch is heavy and it holds a lot of water when it’s wet, which makes it even heavier. It also creates a pocket between the patch and the Gore-Tex fabric and when that pocket fills with water it never dries out. Then, when you warm the water in that pocket you get reverse breathability which is why your knees and seat always feel damp.’

‘Another problem is that when you sew the Cordura into the side seams you create a very thick seam. The result is that when you waterproof tape this seam there’s a significant risk of failure because you’re asking a lot of the pressure rollers on the PTFE tape machine when they are a forced to go over this very thick seam. If the membrane in the tape cracks, you’ll have a leakage.’

‘With all this in mind we believed that the only sensible solution was to use a completely non-absorbent fabric as the patch and to apply it in a way that eliminates the pocket and the thick side seams.

‘The logical route was to try and laminate something to the outside because with a laminated patch, you don’t need to go to the side seams. A laminated patch also means that there are no pockets and using a material that is totally non-absorbent means there is no weight gain when the garment gets wet. With all this in mind we went on the search for the ideal fabric and a solution as to how to laminate it to the outside.’

Nigel is tight-lipped about the material itself, but when it came to the lamination, the expertise is close to home and not available to the opposition. ‘As many will appreciate from the North Technology Group’s pioneering work with 3DL and laminated sails, we have a considerable number of experts in this field which was very useful in both finding the right material and then having the knowledge to create the perfect laminate.’

Two years of rigorous testing then followed resulting in some impressive feedback including a serious thumbs up from Imoca 60 sailor Kévin Escoffier.

‘I tested the same North Sails smock and trousers over 40,000 miles of hard sailing including the Transat Jacque Vabre, Le Defi Azimut, Vendée Atlantique – and the kit is absolutely reliable,’ he says. ‘What is just amazing about the North Sails Performance kit is how light it stays even in very wet conditions. The 4DL patches just don’t take in any, any water at all. It’s great and so comfortable.’

And Escoffier is not alone in singing the praises of the new kit. Being lightweight yet extremely robust, 4DL is proving to be popular with offshore sailors and by the end of the 2021 Transat Jacques Vabre in which teams went from cold, dark and wet to the heat of the tropics in one race, Maxi Edmund de Rothschild’s (Gitana 17) skipper Charles Caudrelier didn’t hold back in his praise: ‘For the Transat Jacques Vabre whenever we did manoeuvres the North Sails gear is just magic,’ he said shortly after taking the Ultime class win in the race.

The North Sails Performance team is understandably delighted: ‘It’s clear that whether they’re racing or training, extreme offshore teams like Escoffier aboard his Imoca or the Gitana Team spend their life on the edge in some pretty serious conditions yet in the last 12 months there were no reported issues, not a single one,’ Nigel Musto says.

It’s hardly surprising therefore that North Sails Performance are so bullish and confident about their new product. 4DL has proved already to be robust, effective and by the accounts of those who have been riding the weather rail for hours on end, dry.

‘The funny thing is that because the sport has never had this type of product we’ve ended up accepting what has become the norm. The fact is that people don’t really appreciate what dry is until they’ve experienced being properly dry. They’re so used to being damp that dry is a bit of a new feeling. And this is what we’re bringing to the party. You really won’t get a damp backside,’ Nigel explains.

As the testing went on there were other advantages that started to appear. ‘While we hadn’t set out with an intent to make a garment that was significantly lighter than anything else on the market, that’s what we ended up with. This lamination fabric is so much lighter than Cordura we’ve saved 30 per cent in weight on dry trousers when compared with our opposition’s equivalent. And that’s when they’re dry. Because everyone else uses Cordura patches, which hold a lot of water, my guess is that we’ll be at least 50 per cent lighter in very wet conditions.’

Tapping into the French offshore scene proved to be invaluable for the North Sails Performance team. While many of the world’s major events were postponed or cancelled, parts of the shorthanded offshore scene were able to continue, most notably the Imoca 60 class and the Vendée Globe.

‘There are very few sailors that have clocked up the kind of miles that the French sailors have over the last two years and that’s been great because one of the main things we need in testing is hours on the water because that’s usually what causes failures,’ Nigel Musto says.

In some ways the North Sails Performance team wasn’t surprised. Secret testing in Australia during training for the 2019 Sydney Hobart Race as well as in the race itself had suggested that 4DL was already delivering more than they had expected. The following year had seen many offshore miles completed in the Imoca scene, culminating in the Vendée Globe.

Once their secret was out of the bag, teams took 4DL into the 2021 season and delivered North Sails Performance with plenty of validations and feedback as the wide range of conditions provided the perfect environment to put theory into practice once again. From the punchy, wild upwind start of the 2021 Rolex Fastnet Race to the intensity of the Copa del Rey and Les Voiles de St Tropez it was difficult to imagine a wider range of conditions.

North Sails president Ken Read is in no doubt as to just how big a step the new clothing represents and doesn’t hold back.

‘Whenever North Sails sets out to build something, it’s a given that we plan on it being best in show. And the North Sails gear that Nigel Musto and his team have designed and built, for all marine applications, is quite simply better,’ he says. ‘He utilised a number of us who have a bit of time on the water to present what we thought were important features. Combine all of that with the new 4DL technology and voilà… the best foul weather gear, made of the best fabric, that the world has ever seen.’

But while the 4DL project gets a big tick, the North Sails Performance team is working on another area that has been neglected and overlooked for many years, women’s offshore kit. Which takes us full circle because, if you think this is marketing speak, when Nigel explains what the North Sails team has been working on you start to wonder why it is only now that solutions are appearing and those answers are on their way. In the meantime, he remains in no doubt about the significance of the move to 4DL reinforcement.

‘When breathable foul weather gear came onto the scene, many people thought that it was a luxury item, great if you could bear the additional cost. Within a few years, no one was considering anything else. We believe 4DL has the potential to do the same.’