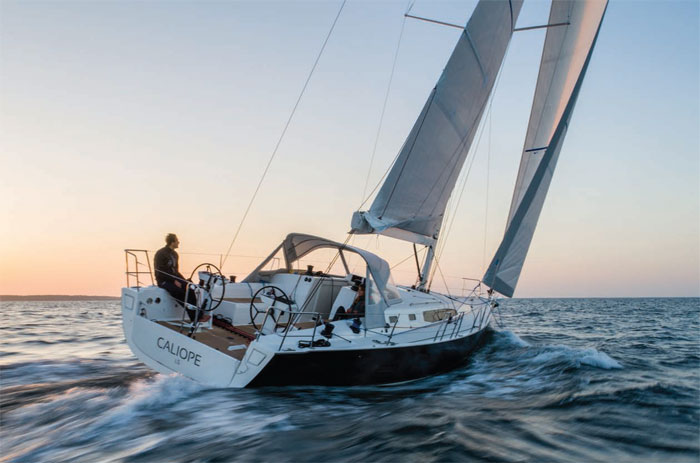 With great performance and a comfortable as well as practical interior, the new J/45 offers sparkling cruising performance as well – should you so wish – as giving you a genuine shot at the racing silverware.

Mention the phrase “performance cruiser” to a racing sailor and you’re likely to elicit a grimace or at best a wry smile. The truth is that many boats marketed as performance cruisers actually offer the worst, not the best, of both worlds. There are of course notable exceptions like the J/112e which, in addition to being an excellent all-round cruising boat, has also notched up remarkable racing results in recent years including wins at both the IRC European Championships and the IRC/ORC Worlds.

J-Boats have a unique, well defined and carefully calibrated design DNA so it’s hardly surprising that their idea of a performance cruiser is quite different from most others in that market segment. Like its raceoriented siblings but unlike nearly all of its direct rivals, the J/45 has a balanced hull shape with a relatively deep canoe body, moderate beam, slender aft quarters by today’s standards, notably low freeboard and an elegant sweep of positive sheer.

Rather than relying on form stability it has a bit more ballast – 4.2 tons on a 7ft fin – and instead of twin rudders there’s a single rudder blade with a very high aspect ratio, like a TP52. In a nutshell it has a more classic and less fashionable hull shape than any other performance cruiser on the market, and that’s deliberate. As Coco Chanel once said (though admittedly not about boats), fashions fade but style remains.

Here’s the thinking behind the design: rather than adapt a typical offshore racing hull that’s optimised for power reaching in medium to strong winds (with performance trade-offs in lighter breezes and on other points of sail), J-Boats have gone for an all-rounder that performs consistently well in all wind and sea conditions and at all apparent wind angles. Instead of a boat that sails most efficiently at a steep angle of heel, they’ve produced one that’s easily driven at any heel angle, with a very low centre of gravity.

It won’t be quite as fast on a spinnaker reach in optimal conditions as a beamier hull form with a flat bottom and powerful aft sections, but it will be able to sail deeper angles downwind with an asymmetric kite. It will also be significantly faster (and more comfortable) to windward, especially in a short chop, with a very narrow tacking angle and it’s likely to be a lot quicker in lighter airs on any point of sail. Sea trials on the prototype J/45 bear this out, with boatspeed matching the true wind speed from five knots up to eight knots – the conditions that are a typical performance cruiser’s Achilles’ heel.

Light-wind performance is more important for cruisers than it is for racers because nearly all cruising sailors do 90 per cent of their sailing in wind speeds from five to 15 knots. When it blows harder than that, they tend to stay in port. That said, heavy weather handling is obviously also crucial for any oceangoing yacht and the J/45’s low freeboard, high ballast, excellent weight distribution and very low centre of gravity deliver a definite advantage. J-Boats are also renowned for their ability to carry full sail past 20kts, well beyond the point when most other yachts need to reef.

Load-carrying ability is another key performance parameter for cruising yachts. A racer just needs to perform well at its light ship displacement with a bit of leeway for the weight of the crew, their kitbags and a few other essentials like a liferaft, basic provisions and the skipper’s secret stash of single malt. By contrast, a performance cruiser has to sail almost equally well while carrying a lot of weight as she does when carrying none.

In typical use, a full cruising payload for a 45-footer adds up to at least two tons. It usually includes much larger tanks of fuel and water than racers tend to carry, bigger batteries, spare gas bottles, several anchors, a tender and outboard, optional extras like thrusters, fridge freezers, heating and air conditioning systems, possibly a watermaker and hydrogenerator, plus at least two weeks’ worth of provisions and personal kit. It all adds up.

The knock-on effect is that a performance cruiser with a light ship displacement of 10 tons generally sails with a full load displacement of 12 tons, so its hull shape has to cope with a 20 per cent weight increase. And some of the racederived design features that define the hull shape of fashionable performance cruisers, such as flat bottoms and high-volume aft quarters, create a hull that’s more sensitive to load. The wetted area is small when they’re lightly loaded but increases rapidly when more weight is added. For long-distance cruising at full load displacement, J-Boats reckon that the better load-carrying ability of a less extreme hull design results in a 20 per cent increase in average passage speed.

Another key difference between cruisers and racers is that the notion of performance means different things. For a racer all that matters is boatspeed. For a performance cruiser, it’s about how that speed translates into pleasure for the crew. Motion comfort, handling, helm response and feel are key factors – and that’s where the combination of a well-balanced hull shape and a single rudder make a noticeable difference. It just feels better.

The interior design and layout by Isabelle Racoupeau combines clean, contemporary styling and meticulously crafted joinery with a complete understanding of the ergonomics and practical requirements of blue water cruising. There’s a secure galley with deep fiddles around its worktops, a forward-facing nav station, lots of well thought-out stowage, and plenty of handholds and bracing points throughout. It’s rare to find such high levels of quality, comfort and style in a boat with this much performance potential; in that respect the J/45 is arguably unique.

So what are the drawbacks? The deep-bodied hull of the J/45 makes up for its low freeboard (still higher than a racing J-Boat), so there’s still plenty of headroom inside. The moderate beam does slightly reduce its total interior volume, but not its liveability – and it avoids compromising the boat’s handling, its motion comfort at sea and its consistently excellent all-round performance. The aft cabin berths are less than king-size width at the foot, but unlike most cruisers in this size bracket two people can stand up comfortably inside both of the aft cabins with the door shut.

Some buyers might be discouraged by the J/45’s relatively high base price but the ready-to-sail prices of its direct rivals are broadly the same. It’s important to compare like with like. The standard spec includes performance-boosting items like rod rigging that are almost always offered as expensive optional extras and the quality-to-cost ratio is high. J-Boats’ vacuum infused hulls are among the stiffest, strongest and lightest in the industry – the entire deck moulding weighs less than 700kg – which allows for better weight distribution and again, better sailing performance. All of this, plus the strength of the J-Boats brand, explains their notably high resale value.

For performance-minded sailors, one question remains. What’s the J/45’s IRC rating? It doesn’t have one yet but if the J/112e’s remarkable winning streak is anything to go by, it’s going to be very competitive.