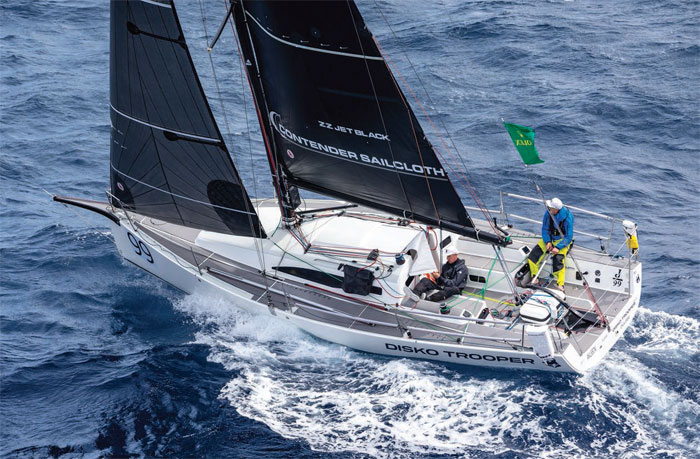 Two-handed racers Jules Hall and Jan Scholten left all of their Sydney Hobart Race rivals trailing and many of them quite literally speechless. The product was pretty good, too…

The 2021 Rolex Sydney Hobart Race was a particularly challenging one with a near gale on the nose, blowing against the current for the first few days, creating a brutal sea state, and a painstaking, tactical drift to the finish. The stand-out result in these challenging conditions was achieved by a two-man crew sailing the smallest boat in the fleet, the J/99 Disko Trooper-Contender Sailcloth.

Sailed by Jules Hall and Contender Sailcloth’s director for Australia, Jan Scholten, they not only won the new two-handed division in all three handicap systems – IRC, ORCi and PHS – but if they’d been counted in the fully crewed category, they’d also have won overall in ORCi and come fourth in IRC. How did they do it?

The Contender Sailcloth team ensured their sponsorship of this project was not in name only. While many of their rivals had moulded sails, Hall and Scholten raced with panelled sails, using ZZ (ZigZag) Jet Black Aramid laminates for the jibs and main.

On boats of 24ft to 40ft you can get a very accurate 3D shape with tri-radials, and panelled sails can be very efficient with weight,’ Scholten explains. ‘You can see it in one-design events. Last September the Melges 24 European Championship in Slovenia was won with panelled sails.’

The team chose a selection of ZZ Black Aramid laminates rising in yarn density from 6000 to 15000 dpi, with angular support built into the laminate with high modulus Technora Black fibres at 12° off axis.

Superkote spinnaker cloth was used for the downwind inventory – a well-proven high tenacity nylon fabric, which is light yet fully optimised for stability, tear resistance and strength. It is polyurethane coated for zero porosity and high water repellency.

Their two A-sails and drifter, which proved essential in the final hours of the race, were built from Superkote 60 (A2), Superkote 130 (A4) and Superkote 150 (drifter) rather than a very firm fabric like Powerkote.

‘Beyond Superkote, Powerkote is very stable and crisp, aimed for boats such as the TP52, which always sail with a shy wind angle going downwind,’ Scholten explains. ‘But we are, like most boats, sailing VMG. We can’t afford to hot it up and plane. In a wind range from 10 – 20 knots you’re not going to plane so you need to look for depth. Superkote has a very good porosity factor.

‘The other factor is that Superkote has the right balance between strength in the primary load direction and bias stretch, so it doesn’t require a very aggressive trimming/crewing action. We couldn’t match that sailing shorthanded and that is also the reason why Superkote is the chosen fabric on Maxi yachts.

‘If it’s too stable you’d have to trim it too much. In Australia when we sail offshore, the sea is often quite bumpy so we don’t really want fabrics to be too stiff. We do want them to be airtight with good porosity numbers and Superkote offers that in spades. We did a bunch of practice sails on our own off Sydney Heads on days with a lot of wind and waves to simulate what we knew would lie ahead,’ says Scholten. ‘Rig tuning was an important part of our preparation.

‘On the very last race before the Sydney-Hobart there was a strong beat back with short waves, wind against current and the weakness of our rig setup was exposed big time. It wasn’t until Christmas evening – we were still out on the harbour talking to our sailmaker on the radio and trying to get the forestay tight with another extra two turns on the D1, that we felt comfortable that we could take on heavy seas and the jibs that we wanted to.

‘It took some fiddling but in the end we really got it right and we basically locked it off. I remember us doing a high five because it had been a draining exercise. The forestay was tight, the mainsail wasn’t too deep. A tight forestay equals a straight mast and that isn’t ideal for light airs, but we were prepared to sacrifice a bit of light air performance for a very reliable rig in strong winds.’

Their choice of sails was also a source of competitive advantage despite the deliberately tight budget constraints they’d set themselves. ‘We went sailing with the original main and a No4 and nearly capsized,’ Scholten says. ‘The sailmaker advised us to go for a smaller main. It ended up 300mm short on the foot and 3m2 smaller.’ The change was dramatic. ‘It was almost like sailing with a full crew and the old main – and we gained six points on IRC,’ he says. ‘We also went for three reefs rather than two, which allowed us to shorten sail in smaller increments and eliminated the need for a trysail.’

‘The big gain was that the rudder wasn’t overloaded,’ he says. ‘We weren’t having to play the main constantly to keep the rudder at minimal angle. In long races your priority is boatspeed and with the smaller main it was much more consistent. We were very worried about how it would go in light airs but the boat was so much lighter without a full crew so it was a non-issue.’

The jibs were carefully optimised. ‘We learned in our practice sails that we could use the No1 heavy up to 20 knots if it wasn’t too bumpy,’ he says. ‘When it was bumpy we could use the No4 up to 30 knots by twisting it all off and putting two reefs in the main. We ended up able to sail close to the target speed with the No4 and the one mainsail from 12kts to 30 knots and it’s very satisfying to know that you don’t have to go forward because they’re hanked-on jibs, so it takes forever to make a sail change.’

‘The first reef we could do from the cockpit with a 2:1 tackline. The second reef we had to put the Cunningham on, so dropped the halyard to a mark, ran forward to put the Cunningham tight. We found we could actually do it without the Cunningham to stop it from flogging, just put the No2 reef line on and then put the Cunningham on. But ideally, Cunningham first. It was all about stopping the sail from flogging. All that was easy. We swapped reefs at the drop of a hat. You did it on your own, when the other crew was downstairs you could put reefs in and out easily. We never went to the third reef, but we must have used the first and second reef a dozen times or more. The third reef would have worked like the second but if the conditions are that bad you could just drop the main altogether, reef and re-hoist, but it never got to that.’

On the first night of the Sydney Hobart their sail choices, tuning and practice paid off. ‘The wind range was big, from 20kts to 35kts,’ Scholten says. ‘We’d take a reef out, get smacked with 30kts plus and go back to two reefs, again and again. Nothing was really surprising about it other than it was very unpleasant. We were tired from all the lead-up and from an energetic start with the spinnaker up, spinnaker down. We were quite puffed after all that but settled into a watch system, two hours on, two hours off. We’d lie with our wet weather gear kind of open, lifejacket off, top layer off, try to get a bit of rest, then we’d swap. We’d even tack the boat on our own. It was just safer.’