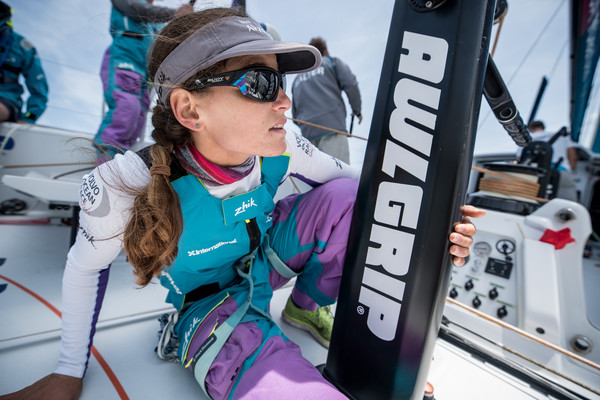 Dee Caffari and 22 other women have sailed in the current edition of the round-the-world Volvo Ocean Race, but they are concerned that there will be no room for them in future races – writes Christopher Clarey in the New York Times.

The Volvo Ocean Race finished on Sunday, and for the first time since the round-the-world sailing event began in 1973, a woman was part of the winning crew.

By winning the remarkably close final leg, from Gothenburg, Sweden to The Hague in the Netherlands, Dongfeng Race Team won the overall race for the first time, with Carolijn Brouwer, Marie Riou and Justine Mettraux part of the crew.

All seven teams had at least two women on their crew lists, which is a sea change from the past, when women were often consigned to all-female crews or did not sail in the race at all.

Initially there was grumbling from veteran skippers like Bouwe Bekking, an outspoken Dutchman who was taking part in his eighth Volvo Race. But all the teams eventually chose to compete with mixed crews.

“We’ve had two girls from the beginning,” said Bekking, the skipper of Team Brunel. “And that’s been a good thing, because we would have lost out under this rule if we had just sailed with guys. It’s plain and simple.”

Determining where the event goes from here is less plain and simple.

Twenty-three women sailed in this edition of the race, which began in Alicante, Spain, in October and included 11 stopovers in cities including Cape Town and Hong Kong.

Though many of the women take satisfaction in having participated in significant numbers, they also express frustration and concern. It is one thing to be invited to the party, quite another to sit at the head table.

Read on at: The New York Times