British Double Olympic gold medallist and sailing broadcaster Shirley Robertson has launched a new monthly interview based sailing podcast which will see Robertson sit down each month with one of the sport’s leading personalities to discuss a wide range of topics from the diverse sport of competitive sailing.

Each episode is expected to last an hour in length and will cover a wide range of subjects, exploring the multitude of disciplines within the sport of sailing, as Shirley talks to some of the biggest names in the sport. 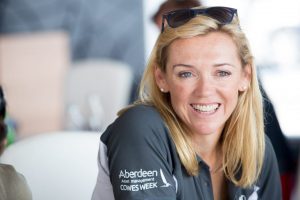 Olympic gold medalists, America’s Cup winners, Volvo Ocean Race winners and world record holders are among those so far lined up to sit in the interview seat, as Shirley delves into her unrivalled contacts book to line up chats with competitive sailing’s most successful athletes.

“I’m very excited to be able to launch my Sailing Podcast,” Shirley said. “It’s been something I’ve wanted to do for quite some time now. Through my work in broadcasting I often sit down with the leading lights of our sport, but the constraints of televsion often only see a fraction of the real story making the cut. But the podcast medium really allows us to chat about a wide range of things in much greater detail. It means we can get to the real untold stories behind our sport.”

The series of podcasts kicks off with a candid interview with Australian sailing star Nathan Outteridge, who is currently leading the Japanese SailGP Team while simultaneously campaiging for a spot at the Tokyo 2020 Olympics in the foiling Nacra18.

A multiple Olympic medallist, Outteridge chats about the Olympic racing scene but also goes on to discuss how as a young Olympic sailor he first got into the high pressure world of America’s Cup sailing, and about the disappointment behind Team Artemis Racing’s unsuccesful campaign in Bermuda in 2017. He also discusses his role as one of the real advocates of foiling, and how the last decade of foil design has revolutionised the sport.

Episode two features British Volvo Ocean Race winning skipper and double-Olympic medallist Ian Walker, who coached Robertson to a gold medal at the Olympics in Athens in 2004. Walker is now the director of racing at the Royal Yachting Association.

An upcoming episode will feature single-handed around-the-world Vendee Globe winner and overall solo circumnavigation record setter, Francois Gabart – who talks amongst other things about the thrill of the southern ocean, the solitude of the solo yachtsman, and the ever shrinking lap of the planet record.

“Sailing in some ways is unlike many other sports,” Robertson said. “I can be chatting to an Olympic athlete one episode, discussing marginal gains and the emotion of standing on top of the Olympic podium, and in the next episode we’re hearing what it’s like charging down a massive Southern Ocean swell, thousands of miles from help, all alone at sea for weeks on end. But also, it’s a sport full of characters, full of on the water anecdotes yes, but also rich in off the water stories, and it’s a combination of those great untold stories that we’re looking for in this podcast.”

Shirley Robertson herself is one of sailing’s highest profile media personalities. For over a decade she has presented CNN’s flagship monthly sailing programme “CNN Mainsail”, is the face of the BBC’s coverage of Olympic Sailing, and currently commentates on sailing’s brightest new circuit, the global SailGP series.

Shirley Robertson’s Sailing Podcast is available to listen to via Shirley’s own website: www.shirleyrobertson.com/podcast, or via most popular podcast outlets, including iTunes, Spotify and Google Podcast.