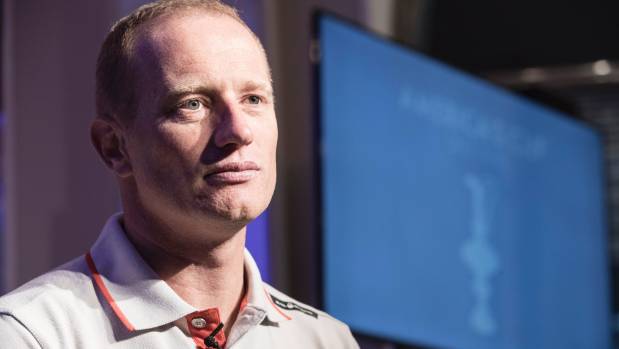 America’s Cup veteran Jimmy Spithill has labelled the new boat to be used in Auckland “a beast” that will take the game to “another level”.

But he offered some thoughts to CNN’s MainSail programme.

And it seems the man who was the dominant skipper in the cup’s multihull era – winning on a massive 113-foot trimaran in 2010, defending on a monster 72-foot catamaran in 2013 and losing in a smaller version foiling cat last year – is intrigued at the prospect of a return to monohulls under the orders of new Cup holders Emirates Team New Zealand.

While the 75-foot foiling monohulls to be used in Auckland 2021 remain on the designers computers, Spithill has garnered enough knowledge from his new team who are the Challenger of Record, to have a good feel for what’s in store.

“This one will be another level,” he predicted.

“It’s extreme, it’s expensive, from first take, and what we are seeing, it’s unstable, and it’s going to be very, very physical.

“Will it work? That’s the question. The America’s Cup has always been at the leading edge of boats. Look at what’s happened over the last decade. The AC72 kind of reminds me of this boat in that it is very, very powerful and never been done before.

“The speeds we could have… it’ll be a beast of a boat. It’s out there.”

Spithill famously destroyed one of Oracle’s AC72s in a capsize in the leadup to the 2013 Cup when pushing the limits under high winds on the San Francisco bay.

He sailed for Luna Rossa in the 2007 America’s Cup, skippering their boat in Valencia in the last phase of monohulls. He was at the helm when they lost the Louis Vuitton challenger series final 5-0 to Team New Zealand.

With Oracle out of the frame for the next Cup, Luna Rossa were quick to snap up the experience of the 39-year-old who has been involved since 2000 and has an intimate knowledge of foiling.

He has been used as an on board strategist for Luna Rossa’s development phase in the TP52 Super Series which is raced in conventional monohulls and the Italian syndicate is proving highly competitive.

Spithill has also maintained his ties to Australian maxi Comanche, helping them to third in the annual Sydney to Gold Coast race this week, where they frustratingly surrendered their lead 15-miles from the finish as light airs hit, allowing their rivals to catch them.

The first of the new America’s Cup boats are due to be launched from March 31 next year.