Skip to content
You are here
Home > Advertorial > Neo 570: As fast as it is stylish… 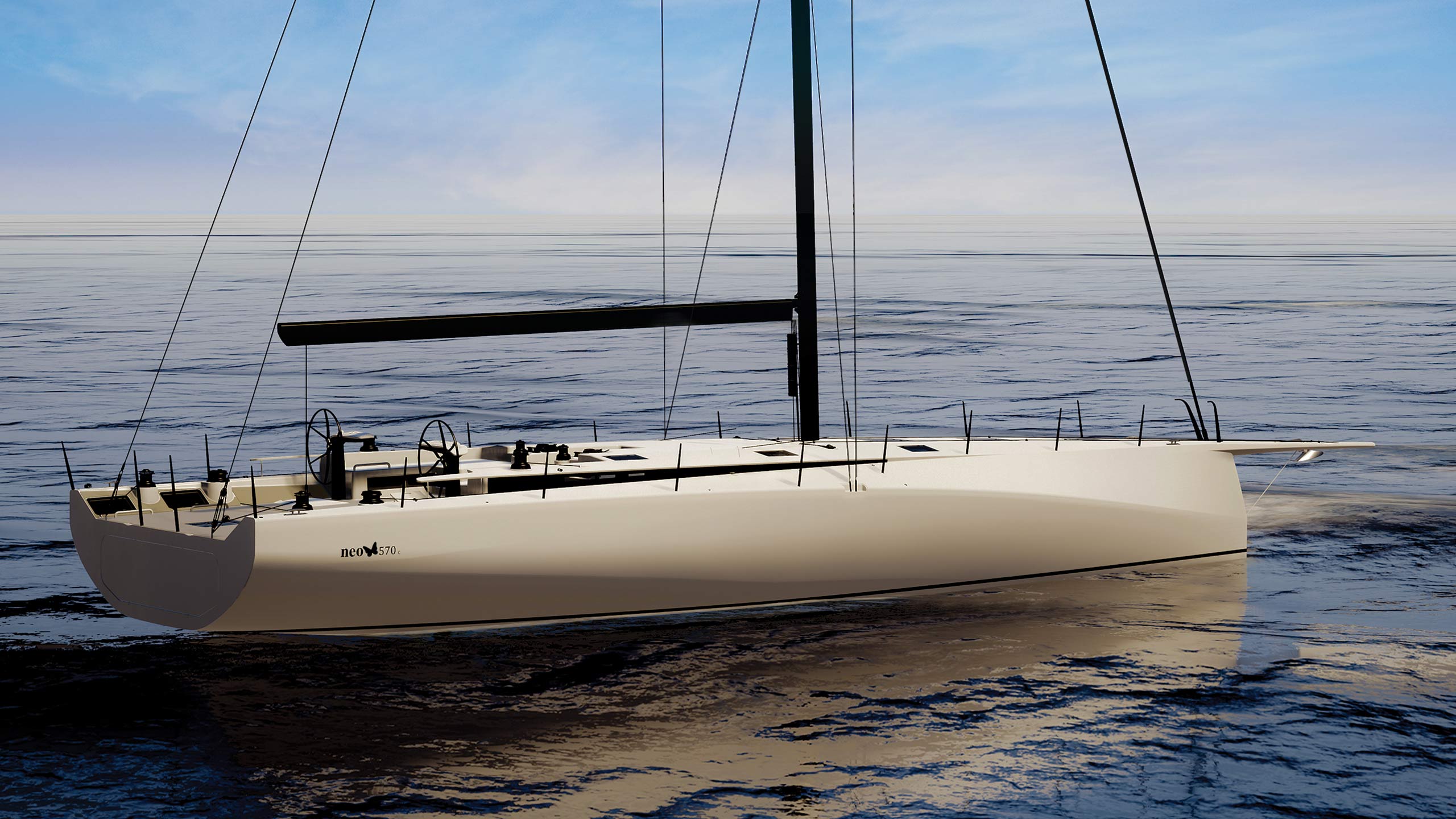 The design studio behind the unbearably foxy Fast40 Rán 7 has teamed up with an Italian shipyard which is already legendary when it comes to good looks.

Is there a production monohull under 60ft LOA with a full cruising interior and all mod-cons that can match the pace and performance of a TP52? Not yet, but there probably will be. Paolo Semeraro, the former Olympian, America’s Cup sailor, master sailmaker and now owner-director of the Neo Yachts shipyard in Bari, Italy, is on a mission to make it happen.

The design brief for the Neo 570, already in build and due to launch next year, reads like a yachtsman’s quest for the Holy Grail. It calls for a boat that can keep up with Quantum and Azzura on most points of sail and in any wind conditions but has shallow enough draught to get in and out of normal yacht harbours.

Not only that, it must be competitive in both short-handed and fully crewed racing, yet easy enough to handle that an experienced amateur sailor can use it for family cruising. It must have a fully fitted interior, air conditioning, a big fridge-freezer, water maker, anchor-handling system and tender garage.

Other requirements include RCD Category A (Ocean) certification and the ability to convert from cruising mode to stripped-out racer in few hours, removing some of the furniture, swapping a pinhead mainsail for a fathead one and a fixed backstay for a pair of runners, without a dedicated shore crew or special tools.

It sounds like a flight of fancy but Semeraro has a track record of achieving the almost impossible. ‘The story starts back in 2014 when I built a full carbon cruiser-racer 40-footer that could make high speeds (26kts recorded) and used it to win the Middle Sea Race,’ he says. ‘We elongated the prototype to make the Neo 400+, which is actually 42ft long and sold three of them.

‘Last year we launched the Neo 350 and sold two of those, one of which was 5th overall in the 2019 ORCì World Championships just a week after her launch. On the delivery trip the same 350, with a full cruising interior, was already achieving 18kts of boatspeed in 18 kts of true wind. And now we have started the big-boat project, the Neo 570. The first boat has been sold already.’

When Semeraro approached Shaun Carkeek, head of Carkeek Design Partners, to design a 52ft racer-cruiser with similar performance and handicap to the latest TP52s, Carkeek said it was impossible. ‘So it became a 55-footer and then a 57, which is the minimum size if you want all the relevant systems onboard – and the maximum size for the handicap,’ Semeraro says.

His idea was to push the concept of a racer-cruiser to the absolute limit, building it entirely out of prepreg carbon, including all interior doors and furniture. ‘We added a few things to enhance comfort onboard but the displacement and weight distribution remain comparable to a pure race boat,’ he says. ‘That was not easy; we had to consider every single component.’

Why did he choose the Carkeek design office? ‘We wanted fresh ideas from a relatively new name. Shaun Carkeek is a young guy… but already with a proven track record and relevant experience,’ Semeraro says. ‘For example, I was impressed with the performance of his Fast 40 design, RAN and his track record in the Fast 40 class is excellent: every new boat has been significantly faster than the last one.’

Semeraro admits that it has been a demanding project. ‘It took a whole year just to define,’ he says. ‘We faced some significant “constructive discussions” with Carkeek, but the great thing about him is that he is unafraid to innovate. He is a man who fights for his ideas, for what he believes in – and that’s what we like. I am accustomed to being the one who wants to push the design to its limits, with others pulling me back. But in this project the designer and the owner of hull number one have been pushing even more. It’s been me who is applying the brakes. The owner is 35 years old, the designer is 45; at 57 I am the old guy.’

‘We didn’t because it would weigh three or four tons more and would not have the same weight/performance characteristics,’ Semeraro explains. ‘And with modern hull shapes, you really don’t need the extra space. They are so wide that it’s easy to fit two very big aft cabins into the hull, with plenty of space for a technical area and tanks between them.’

He says many shipyards tend to build yachts bigger than they need to be ‘because they get more money for doing essentially the same job. But why is it that large racing yachts so rarely win a race on corrected time? We researched the outcomes of major IRC/ORC events. In more than 80 per cent of those regattas, the winning boat was a TP52. For those who want to enter the mini-maxi class, we have the solution’, he says.

A typical custom build project of this type has a budget of around €3m and only half of that goes into the hull.

‘My philosophy is different,’ Semeraro says. ‘I think it’s important to put most of the money into the boat’s hull and structures because that’s the permanent part, the base construction. For the Neo 570, 70 per cent of the budget goes into the hull.’ It makes sense to use a full carbon mould even though it costs twice as much, he explains.

‘It allows us to use the absolute minimum amount of fairing compound. It’s very important to eliminate as much passive weight as possible. You only have to remove 40kg of filler, and you have saved enough weight to fit a watermaker. Using pre-preg makes the boat’s weight more predictable as well as lighter and ensures that there is no elongation whatsoever between the boat and the mould.’

Weight distribution is also crucial. All of the systems will be in the lower part of the boat; the rudder is three metres forward from the transom and there is nothing behind it apart from the tender garage, which will be empty while racing. All previous Neo Yachts have precisely hit their design weight, which is extremely rare in boatbuilding.

‘It’s usually a problem with the mentality of the boatyard and the designer,’ Semeraro says. ‘We include all of the options before calculating the boat’s design weight – the tender garage, the fridge freezer, the anchor, the air conditioning and so on.’

It’s important to remember that this design isn’t just a radical oneoff. It’s intended for series production with semi-custom layout, rig, keel and equipment options. ‘We’re planning to build just a few of these boats per year,’ Semeraro says. ‘It’s impossible to produce good boats if you build too many.’

The first Neo 570 will have 450 litres of water ballast, to be used only for short-handed ocean racing. There are three different interior layout options (cruiser, cruiser-racer and racer) and two keels, lifting or canting. ‘Hull number one will be the cruiser-racer version with two master cabins, two bathrooms with separate shower and front open space,’ Semeraro says. ‘And a 4.2m deep lifting keel. TP52s have a draught of 3.8m; this bigger boat needs the extra righting moment.’

Despite offering a canting keel option, Semeraro isn’t convinced that it will be much faster unless a specific type of offshore/ocean racing use is the programme. ‘If you analyse racing results you will find that about 85 per cent of the time, a fixed deep keel is actually faster on corrected time,’ he says. ‘Compare the performance of the Cookson 50 – which is a very good boat – against a TP52.’

The lifting keel option is a musthave for cruising, needed to get into most normal yacht harbours and many anchorages.

‘You’d definitely need the lifting keel version if you wanted to cruise the Caribbean,’ Semeraro says. Some keel systems can do both – cant and lift – but he reckons they aren’t suitable for this super-lightweight boat. ‘The weight of the combined system would negate all the benefit of the canting keel,’ he says, at least on this size of yacht.

What sort of owner wants a boat like this? Semeraro says there’s plenty of demand from customers who are tired of sailing long distances in totally stripped-out, uncomfortable boats. ‘We’re going for younger (in mentality) owners aged 40 to 60 who want both adrenaline and pleasure,’ he says. The sort of owners who will go to St Tropez with a professional crew, then spend a week cruising with their family. If they buy a TP52, they’ll need another boat for cruising.’

The design will have to prove itself on the race circuit but one thing’s for sure: with a passage planning speed of 12 knots or more, the Neo 570 will massively extend your cruising range. As Semeraro says, ‘You can sail overnight from Italy to Croatia or Greece and be there early in the morning for the first choice of fresh fish from the fishermen’.