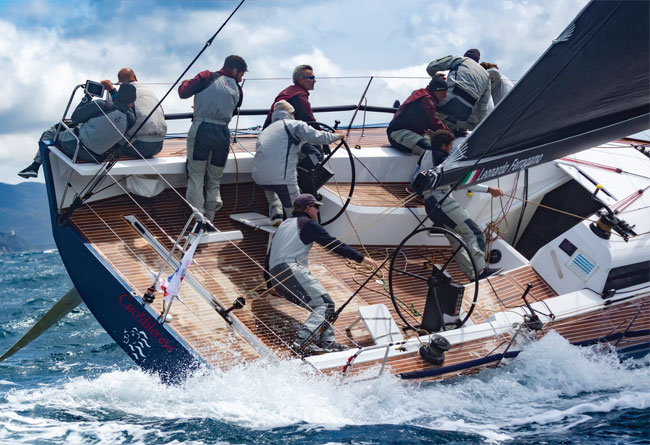 The pairing of Swan and Juan K was already more than successful with the innovative, elegant ClubSwan 50 attracting a new generation of owners. But the same combination’s new ClubSwan 36 – this is something else.

Right now the nascent circuit plays to its strengths, offering tight, evenly matched, owner-driven one-design racing at popular venues. It is steadily building momentum, delivering regular racing for the active, passionate ClubSwan 50 owners and their crews, and also providing very attractive class racing for the Swan 45 and Club Swan 42s. In due course, it should provide a focal point for renewed interest in these older one-designs.

The arrival this season of the new Juan Kouyoumdjian-designed ClubSwan 36 rocket ship, launched at the second league event in Scarlino in early May should see the circuit grow exponentially from next year onwards. Before the prototype ClubSwan 36 was launched, six boats were already sold and should make their debut at The Nations Trophy in October. Vice president of Nautor Swan Enrico Chieffi explains,

‘They are pure racers. It is the modern evolution of many racing classes. The ClubSwan 50 is a proper yacht. The ClubSwan 36 has no compromises. One-design sailors coming from dinghies or high-performance keelboat classes will find a great option in the 36.’

Chieffi continues: ‘With the 36 we should create very big numbers quite quickly and the ClubSwan family as a whole will be complete. We see gaps in many aspects of sailing and the Farr 40 is a very good example. We could see the need for a professionally managed circuit of events on an international level and this ClubSwan division, on a strategic level, is a little bit what the M series is for BMW.’

Meantime, the Monaco league regatta represented not only the first opportunity to put points on the board towards the season-long championship, but the best early season chance to compete in a full race environment. For those looking to peak in the big fleets on the Bay of Palma at Copa del Rey in late July and the Nations Trophy in October it was an essential starting point for the 2019 season.

The ClubSwan 50 fleet continues to grow apace. At the Copa del Rey at the height of the Med summer in 2017, there were six pioneers racing and Hendrik Brandis’ appropriately named EarlyBird won. Last year the fleet had doubled to 10 boats and Germany’s multiple Swan 45 title holder Brandis retained the Copa del Rey on the strength of a 2,1,1 finish. That remarkable growth rate, unprecedented in any other comparative division in Europe, will be all but intact when 17 ClubSwan 50s muster on the Palma start lines.

Newcomers to the class who took advantage of the low-stress Monaco event to put some proper racing miles under their keels included Britain’s Ross Warburton, who is looking for a new challenge and brings his established core crew into the red hot ClubSwan 50 class after a few seasons of superyacht racing. Warburton and his team, with tactician Ian Budgen and renowned Spanish navigator Nacho Postigo, stuck a toe in the water with a charter at 2018’s Copa del Rey prior to taking the plunge from this season on.

They sailed Cuordileone a couple of times as a crew in nonrace mode as they waited for their new boat to be ready.

’The circuit gives us all a focus to work towards, a pathway,’ Budgen says. ‘We are realistic, we know we can’t expect to be up at the front of the fleet early on but for us this is a long term project. And you know exactly what you are getting into. Swan owners know what they want, where they want to go and Swan delivers a great product, there is always a good balance between competition on the racecourse and the social scene ashore.

Although only three races could be sailed due to the very light winds, each was won by a different boat. North Sails’ Ken Read called tactics for Leonardo Ferragamo’s winning Cuordileone and contends that this is the best one-design fleet racing available. Consistently true to the ethos of one-design, it is the small details, smooth manouevres, adept gear changing in breeze transitions, good crew communication and astute tactics that win races and regattas.

The level, he says, is ‘1,000 per cent higher’ than it was two years ago but because of the influence of the top pros in the class, the updated tuning guides and the general cross-fertilisation of ideas, it is relatively straightforward for new owners and their established, experienced crews to achieve fleet speed and to become competitive.

In Monaco, Read remarked: ‘The basic premise of the tuning guide is still really solid. Everybody has their own iterations I’m sure, like in any one-design class, but the basic principle of the tuning guide remains. The sail shapes, as in all classes, have been refined slowly but surely. But in fact it’s harder to refine sail shapes in a strict onedesign class like this where there’s such a restriction on (sail) buttons.

‘The sheer number of sails aren’t out there in the class to try different shapes and sizes. So it’s fun to see the new teams come into the class and be competitive right away.

‘Maybe the results don’t show it immediately but certainly the speed on the racecourse is really competitive. I think as an industry we are doing a pretty good job of helping to get the new folks up to speed, which is critical.’

For sure the ClubSwan 50 has found its marks delivering competitive, evenly matched grand prix racing to experienced ownerdrivers and their crews. It is not TP52 racing. Budgets are generally well contained but the return on investment, the “bang for your buck” is attractive.

As Read observes: ‘You don’t get into the ClubSwan 50 class with a faint of heart, not being able to spend a little bit of money. It’s a very competitive one-design class and that inherently means your gear and your team have to be up to it. That’s the nature of the beast. But they have done a great job of capping the overall costs with restrictions to class rules, sail restrictions and crew restrictions. How much further you want to go is up to the individual owners at this stage.’

The class is attracting top tier pro tacticians. Up against Read in Monaco were multiple Olympic medallist Jochen Schümann, now on OneGroup and Spanish Volvo skipper and double 49er Olympic medallist Iker Martinez on Mathilde. Bouwe Bekking returns to the circuit imminently with Niramo as well as Fernando Echávarri on Skorpios.

Ken Read adds: ‘I think the owners are not just happy, but are having a blast. I was talking to Fernando Echávarri the other night and it’s great to see when people realise we are not in the sailing business, we are in the entertainment business. We are here to make sure these guys and girls have fun. So it’s a challenge for all of us, as the sailors, to try to realise what the goal is of each. Some might storm off the boat if they haven’t won by 30 points, others might hug everybody, come in last because they just had a beautiful day on the water and then there’s everything in between.’

Without doubt owners on ClubSwan circuit, The Nations Trophy Med League are having fun and although it is early days – this is just year two of the circuit – these monthly contests from April to August are adding value and requiring owners and crews to improve. ‘Overall it is a very successful operation,’ says Enrico Chieffi. ‘One year ago, I would not have dreamed we would be having more than 40 boats at the Copa del Rey and 45 at the Nations Trophy, growing so quickly. And this is very much just the start. We are looking to great numbers in the future and we are determined that the older members of the family are not left behind and will be part of the success story.’ The Swan 45 has passed through, on average, four generations of owners now.

Chieffi explains: ‘The perfect combination of owner-driver, amateur sailors and professionals make the proposition and the fun unbeatable. At Swan we are not the America’s Cup or the Olympics, so we are not talking about hard competitiveness, but still we are competitive at sea and friends ashore, living the full experience of ClubSwan.’

Three wins in the ClubSwan 42 gave owner Lorenzo Mondo of Far Star the perfect start to his season. ‘The 42-footer for me is really an allrounder because it’s very good in one-design class racing, but is also good in other kinds of situations and opportunities, so we can do our winter season, the class season, the Mediterranean league,’ he says.

‘This is a boat you can enjoy all year. We are going to go to the 36-footer now as it’s more our size. Our crew is a group of friends. Our objectives are learn, win and then some fun. That’s our three pillars. Each year I have just four weeks to dedicate to my sailing.’

The circuit moved to Scarlino in late April before heading to the Rolex Giraglia, inshore races in St Tropez and will climax at the final biennial event, The Nations Trophy, in Palma from October 8 with more than 40 boats and over 15 nations.

Click here for more information on Swan One Design