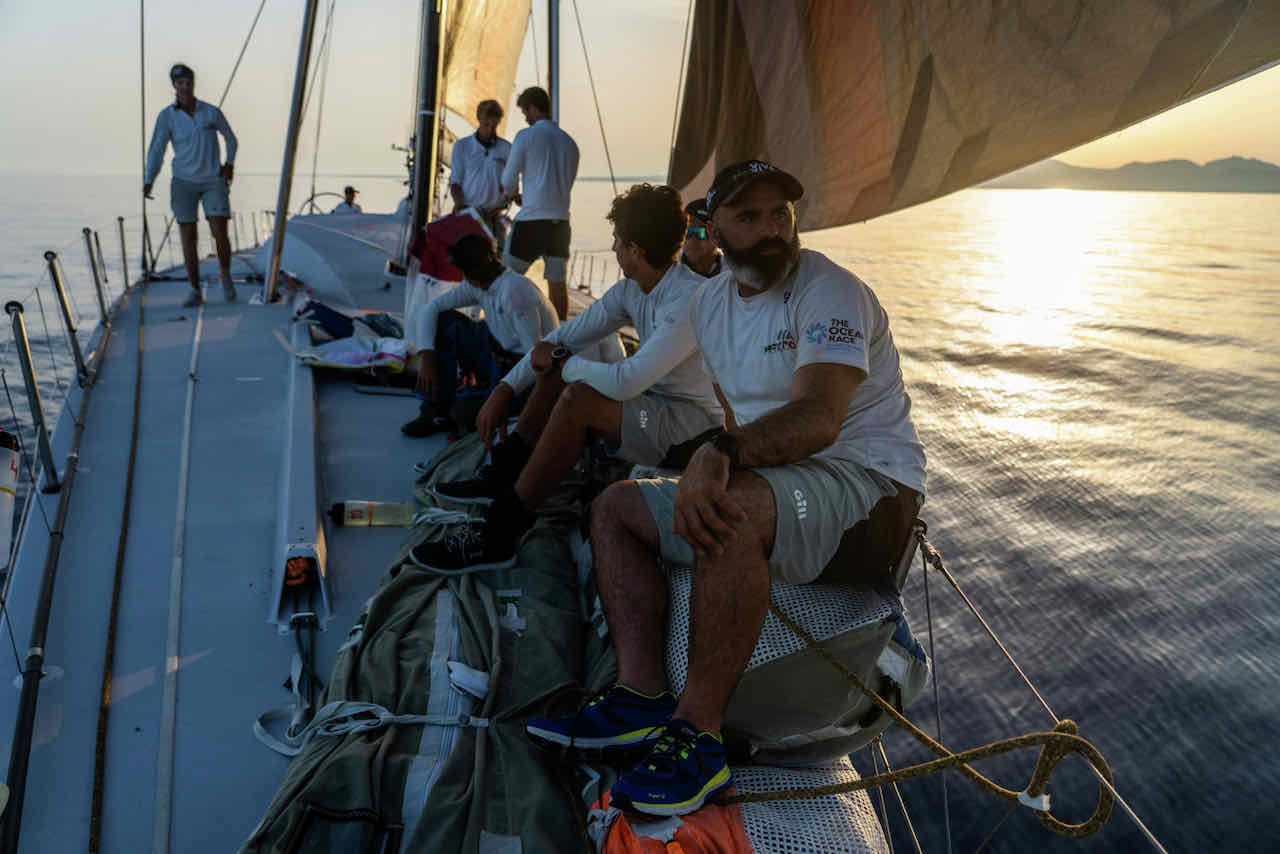 The crews competing in The Ocean Race Europe have spent a second restless night out on the Mediterranean searching for wind to help them along the race’s third and final leg from Alicante, Spain to Genova, Italy.

Since leaving Alicante both classes have made stop/start progress due to patchy winds and large glassy areas of total flat calm littering the route to Genova.

The VO65 class has made the best collective progress so far, having made it past the Spanish islands of Mallorca and Menorca overnight, and into some welcome fresher northerly breeze filtering out across the Mediterranean from the French interior.

In the last 24 hours the leading pair – Sailing Team Poland, skippered by Bouwe Bekking (NED), with Norway’s Aksel Magdhal as navigator, and Mirpuri Foundation Racing Team led by Yoann Richomme (FRA) with fellow Frenchman Nico Lunven navigating – have benefitted from being first into the new breeze and considerably extended the gap between them and the chasing pack.

Meanwhile, there was relief aboard the Dutch-flagged Team Childhood-I, skippered by two-time around the world racer Simeon Tienpont (NED). The crew had bet everything on an alternative northern passage past the Balearic Islands, but yesterday had struggled to find any meaningful wind along the northwest coast of Mallorca.

“We’re about halfway through the leg and we’ve had a nice split in the fleet,” said Lars van Stekelenborg from the foredeck of the Team Childhood boat today. “We were the only boat going over Mallorca, so as it is right now, Poland and Mirpuri are slightly ahead of us and to leeward. We can’t see them. The other pack is about 90-degrees off and about 10 miles from us so we can’t see them either. We’re all sailing east and into a tricky area again as fast as we can and then we’ll have to see what happens when we get there.”

In the IMOCA 60 class the northern route taken by Robert Stanjek’s non-foiling Offshore Team Germany has continued to pay dividends.

“We never planned to split from the other IMOCAs,” said Stanjek. “But all of our weather routings were all north of the Balearics. So to us it was obvious we go this way to the coastline. Some of the others did as well. But then somehow we found a lane where we were lifted brutally away from the fleet. Within a few hours the separation was so big… It was never our plan to split, but a chance opened and we took it. And now it is like two different races. Four of the IMOCAs are south and they are sailing their race and we have to sail ours.”

“All of the foiling IMOCAs are close together (this morning) off the coast of Mallorca,” said Pip Hare on Bureau Vallée. “Offshore Team Germany went north of the Balearic Islands, which was a punchy move and it looks like it may pay off for them – they’re looking good. We’re all battling it out on the south side though. It’s very close racing. We’ve had complete (wind) shut-downs and then at one stage we were doing 16 knots upwind. It’s great. Let’s see where it goes!”

Despite today’s better breezes and the large separation seen in both fleets, the wind is expected to drop away again, which may result in both fleets compressing before the end of leg three.

“Leading into the light air zones is always tricky as the boats behind have more speed and manoeuvrability and can wait for us to slow down before they try another way to attack,” admitted Sailing Poland navigator Aksel Magdahl. “We will just have to be patient and not start giving away too much to cover the boats behind, otherwise the lead will slip quickly.”

At the same time, seventy nautical miles (130km) to the west, IMOCA 60 leaders Offshore Team Germany were still in good breeze and trucking along at double-digit speeds as they extended further on the group of four foilers – still making their way past Menorca and not yet fully in the new breeze.

With leading VO65 Sailing Team Poland having a little over 200nm / 370km to race to Genova and the leading IMOCA 60 Offshore Team Germany a further 80nm / 148km back, the earliest estimated arrival in Genova for the leading boats is Wednesday night.

Follow their progress on the race tracker and through updates at www.theoceanrace.com