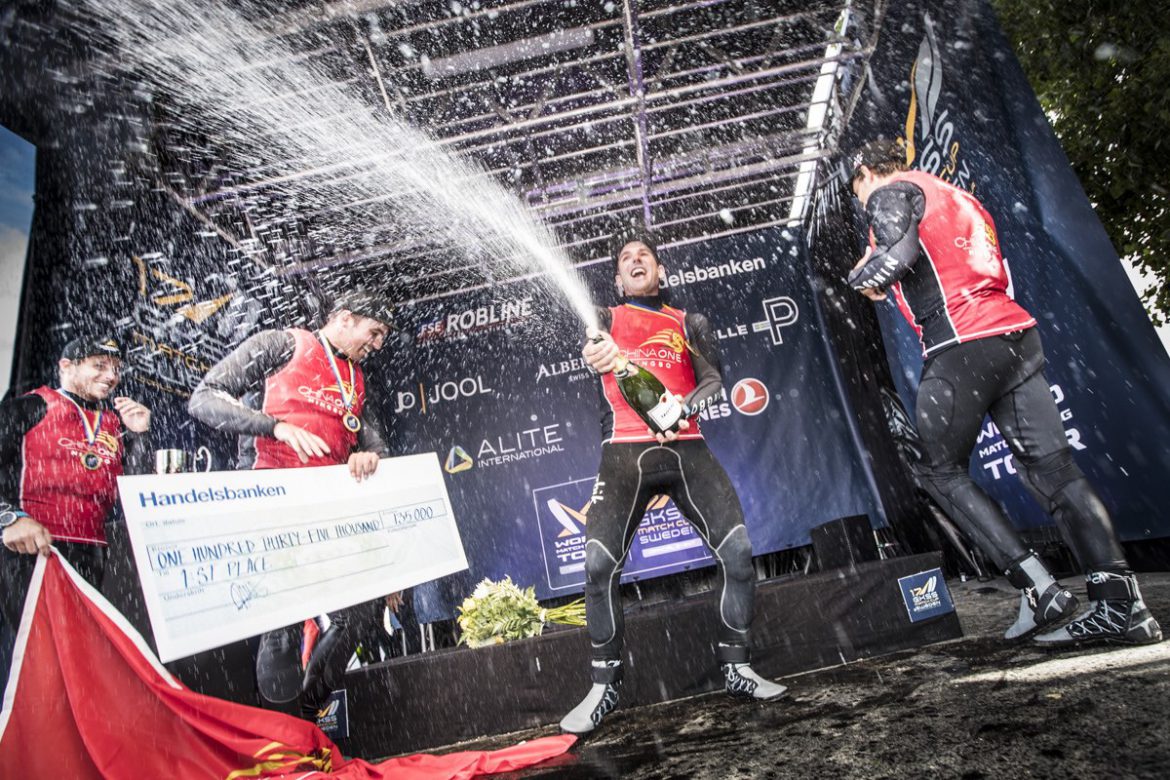 Swedish businessman and passionate sailor Håkan Svensson had a long pedigree of supporting professional sailing when he bought the World Match Racing Tour in 2015. Now after spending three years and tens of millions of dollars transforming the event almost beyond recognition he is in the process of selling it. We sat down with Svensson to find out why.

Tell us about your background in sailing and in business.

I started sailing in the early 70’s in a small town in Sweden called Kristinehamn. I started in Optimists but over the years I also sailed Europe, Laser and Snipe dinghies.   I windsurfed a fair bit in the 80’s and my first keelboat was a mini-tonner. More recently my sailing has been on larger boats – had an International 11 Meter One Design before I bought an X43 and later a X50.

I have always sailed because it is fun and I have enjoyed myself very much in this sport.

On the professional side, I studied to become an engineer and in the early 90s went into technical sales for a propeller company where I stayed for seven years. After that I worked in Singapore at a shipyard before I bought the propeller company Berg Propulsion with my father. We had a fantastic growth with Berg and we started businesses around the world.

We decided to sponsor Ian Walker’s Green Dragon campaign in the 2008-09 Volvo Ocean Race and found the VOR to be an excellent platform bring customers to customers to tell them our ideas about propulsive efficiency and how important (as well as good hydrodynamics) smart use of routing, wind, and currents were for optimisation of global shipping.

Around the same time I was also sponsoring my long-time friend Freddy Lööf in his 2012 Olympic campaign in the Star class.

We were very happy about the results of our sponsorships in sailing and decided to go for the 2011-2012 Volvo Ocean Race together with sportswear company PUMA. Ian Walker helped me do that deal with PUMA because at the time he didn’t have a campaign we could get involved with. The 2011-12 VOR campaign worked extremely well for us and we sold many propellers to the ship owners that visited us at the stopovers around the world to hear what we had to say about efficiency, fatigue, seamanship, routing and plenty of other topics.

We sold Berg Propulsion to Caterpillar in 2013.

What was your motivation when you bought the World Match Racing Tour? What were the circumstances that led up to you making that purchase?

In 2013 and 2014 we started the Aston Harald Composite business and we had bought the rights to build the M32 catamaran from Marström Composite.

We ran the M32 Cup – that later turned into the current M32 Series – in Scandinavia. We thought this was a good way of getting our newly started company known to the world.

We decided we needed a better platform to market the business so in 2015 we agreed to buy the World Match Racing Tour.

We believed the event could benefit from some new energy and a bit of flair in the way that it was presented. The America’s Cup had just moved to catamarans and we felt that match racing could be more interesting to watch at 20 knot speeds rather than the previous slow speed racing.

We started off with a bang and set up events in many parts of the world with an ambition to make the action more exciting while at the same time keeping safe.

We had many older gentlemen against us who claimed that we had done the wrong thing and that things should have remained the same as always.

At the time that opposition did not matter too much given that our objective was to market a carbon fibre manufacturing company.

However, over the years I have realised that many people want match racing to be much so that they can understand the moves and the tactics of the competing crews. For those people our version of the World Match Racing Tour is probably not the best alternative.

That said, I have not had the same response from the competing sailors.

One thing to add is that when it came to the boats themselves we have seen very fair competition in close to identical boats. That shows we can build products to very precise tolerances – a big objective from our side and an area that we see many boat and dinghy manufacturers have a hard time with.

How did Aston Harald and the manufacture of M32s fit in to the plan?

The M32 is a light boat with high loads, yet very easy to sail, easy to transport and fun to race. We thought it would be great to use as a hospitality platform to put our customers in the hot seat – and from that point of view we feel succeeded.

Out of all the things we manufacture at Aston Harald this is the only product that we own all the rights to.

How much of your purchase of the World Match Racing Tour was altruism and how much was based on financial/business aspirations?

I think that if I am honest there are much better ways of marketing a brand than going into sailing. We are in a sport that many people feel a strong passion for but there is little structure.

I felt for the passionate bunch of people who were willing to train hard and try to reach their dreams. I have always enjoyed sailing as I think it is a sport where it pays off to be smart, tactical, strategic, and have great endurance.

I think it is a sport that can help people build themselves into very capable human beings – and I wanted to support that ethos.

To have worked with Freddy Lööf in his early years and Ian Walker and Ken Read in their prime was an honour. The lessons I learned can be applied to any business looking to energise their organisations and inspire their staff.

When I look at how we built the World Match Racing Tour from around 50 competitors to upwards of 300 now by removing the 55,000 USD cost of a Tour Card and replacing that with licencing clinics, I think we have done well.

Even our insurer saw how seriously we took the safety aspect and how we worked around that to create a good safe platform for fast boats in match racing.

Was it too much money spent? Yes!

But did we have fun doing it? Yes!

And did it help us to gain a better understanding of what our customers were trying to do with our products? Yes! Can you put a figure on how much you spent on the infrastructure for the World Match Racing Tour?

We even hired accounts and tax expertise to be able to handle the different country’s tax laws around the prize money,

Including the Volvo Ocean Race sponsorships in total we have probably spent some 35,000,000 USD in sailing since we started.

Not everyone agreed with your vision for the WMRT. Did the detractors make it harder for you?

No not everyone agreed with what we have done or how we did it. But there are also many that have applauded us for making a difference in sailing and contributing to change.

It is good to have nay-sayers sometimes as they generally sharpen your instincts and focus your effort. But then again, only for so long.

I dislike the “I told you so” population who do not invest anything to prove their counter offer or argument is better.

There are too many people out there who complain about the trash on the street but don’t pick it up or make an effort to develop a better system.

I am an engineer and as such have a strong belief system that it is development that will change the world and not by going backwards.

From the outside the event looked to be a raging success with exciting content and good exposure for the events. Was the view from within different?

No, I think we were equally enthusiastic about the output.

What are the key factors that have driven your decision to sell the WMRT? What was the tipping point?

Mainly personal reasons that mean I need to refocus my life and have decided to enjoy a little bit more myself rather than working on doing all I can for others.

What can you tell us about the deal? How was it brokered?

I have signed a deal with C Shine who ran the WMRT Final last year. The deal is a straightforward sale of shares. The other party has signed the contract but not yet paid us. So we are waiting for them to fulfil their side of the deal.

What part did World Sailing play in the deal?

World Sailing has given an approval of them as the new owners of the World Match Racing Tour and have been cooperative and done everything that was necessary from their side.

Other than a return to monohulls, what does the deal mean for the future of the World Match Racing Tour?

I doubt that the new owner will only organise racing in monohulls. In my opinion the future of the event includes monohulls, foiling, and multihulls. There are many things happening in sailing’s evolution, so who knows what this will bring.

Just looking at the Olympic classes now with the introduction of foiling kites and an offshore event. Then there is SailGP, the Extreme Sailing Series, the new Volvo Ocean Race, the amazing new boats in the Route du Rhum and Vendee Globe.

If anyone is hoping only to see only monohulls in sailing’s future I think they will be greatly disappointed.

Given your time over what would you do differently? Do you have any regrets?

[Laughs] Yes, I have many regrets of course – but then again, why cry over spilled milk?

If I had the choice again, to silence the detractors I would have had three boats: one monohull, one foiling and then the M32.

But I did what I thought was right at the time and I put my money where my mouth is – I am proud of that.

What will you be focusing on going forward?

Sailing and racing the M32 in the various series we have built up and the class now manages. Freddy Lööf was right when he told me I would love this boat.

The evolution of sailing is an exciting prospect. Managed correctly it could play an important role in helping humanity to reduce our footprint in nature.

Perhaps we can learn to harness the forces of nature to the extent that worldwide shipping can be carried out by highly-efficient sailing boats.

The design innovations coming from the likes of the America’s Cup and SailGP are what will drive this and there are cross-faculty projects at universities right now developing better shipping by using lessons learned from sailing.

I guess the day that I am on my way across the Atlantic sitting on a fast sailing boat instead of an aeroplane, is the day I will finally have combined my passion, my work and my love for adventure.

One thought on “Money where my mouth is”