Skip to content
You are here
Home > LATEST > Missing you 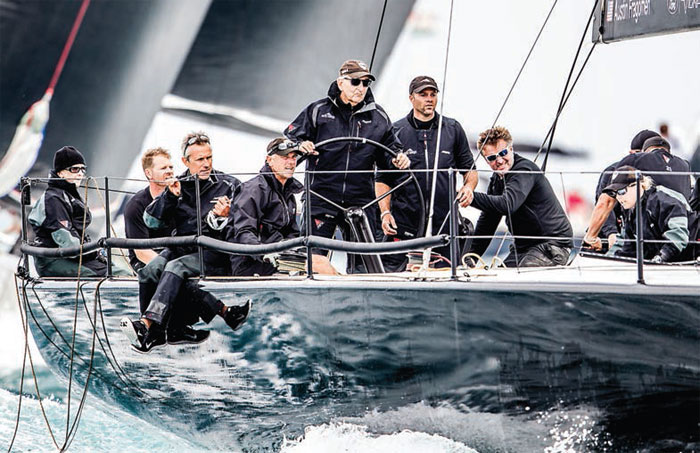 Owners and 52 Super Series crews past and present cherish their favourite venues and there are many different reasons why. Big winds, Atlantic waves and the compact old town of Cascais; the simple reliability of Costa Smeralda with its beautiful scenery (chic and smart ashore), to name but two hardy annuals.

But as the 52 Super Series should celebrate with 10 candles on our cake this year you don’t need to walk far down the race dock to find sailors who go all misty-eyed for Menorca, Croatia or indeed Miami.

It is, however, appropriate that this year’s – postponed – 52 Super Series Sailing Week and TP52 20th Anniversary Invitational was hosted by Puerto Portals. The Bay of Palma is very much the ancestral home of the TP52 Med fleet and Puerto Portals always has a unique buzz about it.

In high summer when King Juan Carlos used to arrive in Majorca for his summer holidays the Breitling Med Cup was the first event he would sail at. Consequently dock-out each morning would usually have a sweaty scrum of photographers and interested public as a backdrop, sharing the moment as the king stepped onto the current Bríbon just a few metres away.

In those early days there were also maybe 20 TP52s and sponsors were drawn to the class, paying north of €500,000 to brand a TP52 mainsail. So it is so gratifying to report that Portals in late August will see 19 TP52s racing; not only does this seem to confirm that the circuit and the class remain in rude health, but here too is a new format to grow from for the upcoming years.

Our Invitational fleet included the original Aifos, one of the five 2005 boats that started the TP52 fleet in the Mediterranean. We also saw the likes of Marco Serafini’s successful Xio (the 2011 ex-Quantum Racing and a past ORC World Champion), as well as Karl Kwok’s Beau Geste which is the IRC’d ex-Onda. The shame, perhaps, is that it would be great to see how the team led by Gavin Brady would do in the real 52 Super Series fleet.

It was great to shine the global spotlight on the diversity of TP52 owners and their boats and once again highlight what makes this such a special and enduring circuit. Going forwards it will hopefully re-emphasise that the 52 Super Series may be the highest level of monohull grand prix racing but it is also very much for the owners and crews who want to test themselves and raise their game race by race, regatta by regatta, season by season.

But, as this column has, I hope, frequently highlighted, the 52 Super Series is not just about high-octane racing – our owners equally value the shared enjoyment of being with like-minded individuals who embrace the same passions, sail hard on the water and enjoy each other’s company ashore.

In that respect Puerto Portals remains special with its self-contained sailors’ lounge only a few metres from the dock… as well as space to have your mothership berthed in the same marina.

A delightful couple who were eager to rejoin the fray after a four-year hiatus are Austin and Gwen Fragomen of the Interlodge team, who seized the opportunity presented when the circuit-winning Azzurra came up for sale last year. ‘I have raced a lot of regattas but the Super Series is very special,’ Austin explained prior to the regatta. ‘It is such an outstanding group of boat owners who it is enjoyable to spend time with. And obviously the competition is formidable!

‘We are especially looking forwards to getting back to racing real time, box rule and not ORC. I know a fair amount now about rating systems and you can try any one you want, and ORC does a pretty good job, but nothing beats racing boat on boat. There is nothing too appealing about racing always with a stopwatch running or, worse still, against a boat that is over the horizon. I still consider the TP52 to be the ultimate size and functionality for a grand prix class.’

This is the seventh Interlodge and the couple’s fifth TP52. The Fragomens also keep a 2015 Botín 44 on which they race New England regattas with the same core crew who sail on the TP52… plus they own a beautiful traditional 26ft wooden una-rigged cat boat which they race in New Jersey’s Barnegat Bay. And we’re not over yet, because there is the J/105 too, which they race week-nights on New York Harbour and Long Island Sound.

‘At the last count I probably race at least 70 days a year. This year we will do the three 52 Super Series regattas plus Palma Vela, but we will then do more next year on the Super Series. When I retire maybe I will race more, but for now it is enough!’ laughs Fragomen.

‘We like to have a calm, quiet boat and we like to be decisive about what we do so we can keep things on the quiet side. Even as an amateur you get better over time and I try to make sure I get better. Most people would say I am a pretty competitive individual, maybe more so in business, some would say,’ he chuckles.

Fragomen’s law firm has 30 offices outside the United States. He visits at least one of them every month and so travel is a big part of his life, one that he still enjoys, often managing to mix a business visit or two with sailing. But the couple have been missing the European and Mediterranean ambiance of the circuit.

‘There are so many great places but the point-to-point races, the distance races on the Costa Smeralda, are probably our favourites. The various cities and venues always make it interesting and an exciting experience.

‘Our target is nothing more than to go out and make sure we give our all and do our best… and that we all enjoy it. This circuit demands such a different level in terms of accuracy and perfection to be competitive. After a bit of a sabbatical it feels very good to be back.’