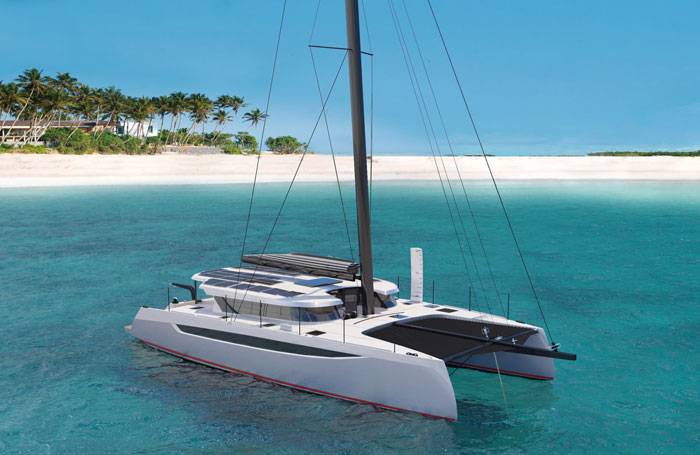 With Morrelli and Melvin on design, Paul Hakes in charge of build and industrial tycoon Hudson Wang investing and guiding his large team it’s no wonder the exceptional skills and financial resources of HH Catamarans continues to allow them to keep driving the large electrified performance catamaran genre forwards.

When Hudson Wang decided to expand his industrial empire to include boatbuilding he didn’t mess around; he invested $35M building a new yard from the ground up, filled it with state-of-the art CNC machines, and tasked veteran Kiwi boatbuilder Paul Hakes with creating the world’s leading catamaran brand. The new HH60 is a breathtaking boat, as stylish and luxurious as it is quick, and is a fitting model for a brand with such lofty ambitions.

It hasn’t all been plain sailing since the business was launched, but Hakes has homed in on a winning formula. Building boats in China means lower labour costs but higher freight costs for any boats sold into US or European markets. As Hakes points out: ‘there is no point building cheap boats here, as the money you save on labour is only enough to cancel out the extra freight charges.

‘However, at the higher end of the market we can invest an additional 20,000 man-hours per boat compared with European yards which means we can deliver a level of finish that would not be economically viable in Europe’.

The exponential growth the brand is currently experiencing is reflected by the fact that only 16 HH Catamarans have been launched to date, but that a further 16 are currently in build! Hudson is not a man to rest on his laurels and is in the process of fitting out a second production facility to cope with the demand. The HH team already includes a 30-strong in-house design office led by James Hakes and 300 boatbuilders, whilst an additional 200 boatbuilders will be employed to staff the new facility.

The next model to be launched will be the HH60 and seven have been sold already, with five of those already in build. The model is designed as an improvement on the HH55 for owners looking for a little more space and performance. Another new model, the HH52, will also be launched shortly to give a pretty comprehensive offering from 44ft to 88ft, and there are mid-term plans to move up the size range even further. The factory has been designed to have space to build a 150ft-triple-decked catamaran, and maybe one day they will work up to that size.

The Morelli & Melvin designed HH60 has an enormous bowsprit, giving a longer J-measurement than previous models to create space for multiple headsails. The hull design features significant forward volume which when combined with the headsails set inside one another should lead to blistering off-the-wind performance. The hull and deck are made from carbon fibre with a foam core, infused with epoxy resin and cured in an oven. No money has been spared on detailed composite work, with everything from crossbeams to chainplates to stanchions coming in carbon fibre as standard.

The 6.5m C-shaped daggerboards are larger in both length and chord than on previous models. The standard foils are symmetric which means they can both be left in a “half-down” position when cruising. The owner of HH60#1 has opted for asymmetric foils to increase performance, although these will need to be lowered and raised during every tack or gybe. An electric line drive system is optional to allow for the foils to be raised and lowered at the touch of a button which makes the asymmetric foil option viable for cruising.

The daggerboards have fixed, impact resistant bearings and the steering system has been designed so the rudders can be changed in less than an hour whilst at sea in the event one is damaged. Such features are representative of the effort throughout the design to make such a powerful yacht practical for long distance shorthanded cruising.

The boat comes with a fixed carbon fibre mast and boom as standard, with mast jack and shims, but HH60#1 will be fitted with a rotating Lorima mast in Lorient where she will be commissioned. High quality custom-built aramid standing rigging and Maffioli running rigging are part of the standard package.

The standard spec boat has twin Beta 75hp diesel engines and Gori folding propellers but the optional hybrid drive system that has been a huge success on the HH44 is once again proving a popular choice with clients.

The hybrid drive option includes twin 20kW electric motors, a lithium battery bank and beautifully integrated roof-top solar panels, as well as an upgrade to the onboard electrical systems that includes C-zone digital switching and Victron battery management. This system is a neat way to increase your effective cruising range by reducing dependence on fossil fuels and with the optional generator it will increase range under power to 700nm. The yacht will make 10 knots under diesel power when needed or a more than sufficient 7.5 knots under electric power only, allowing it to slip in and out of harbours in silence.

A forward cockpit arrangement is an option that more than half of the buyers have gone for so far.Hakes believes it is particularly well suited to owners who have shorthanded cruising ambitions as it makes night watches a more sociable experience as well as providing safe access to the mast base during manoeuvres. The boat can be fitted with aft tillers and bucket seats to provide the best possible view whilst racing, as well as the possibility of twin steering wheels that can be rotated from the cockpit to the cabin top to help with manoeuvres in port.

HH catamarans will offer a level of customisation with the 60 that extends way beyond the cockpit configuration and choice of rig, which means the boats can be perfectly tailored to meet the racing and/or cruising needs of each owner.

Hakes is proud that there are some things that unite his diverse client base: ‘They all take security very seriously and are happy to pay for systems that make sailing such powerful boats safe and fun. And they all value the luxuries in life so we’ve made furniture out of carbon fibre for some of our racing-focused clients but it’s still covered in wooden veneers and looks the part.’

Onboard systems tend to include load sensors in the shrouds, which give a de facto measurement of righting moment, allowing alarms to be set to warn when the boat is being pushed close to its stability limits. Other options are a hydraulic mainsheet system linked to emergency release buttons situated throughout the boat, as well as OSCAR collision avoidance cameras.

The cockpit area of the HH60 is substantially larger than the HH55 as a response to existing clients asking for more space to entertain guests. The aft cockpit contains a sunbed and dining area, and is covered by a hardtop that can include raised sections for anyone opting for raised helm stations. Sails can be trimmed from electric winches next to the aft helm stations, keeping the seating and lounging area entirely free of ropes.

HH would be happy to work with any potential client’s interior designer of choice, although they do have significant in-house interior design expertise and so far no clients have felt it necessary to take that route. Open plan indoor/outdoor living areas with panoramic views are a key selling point of large catamarans and the HH60 doesn’t disappoint. All layouts include a forward-facing chart table to port and for those who have chosen the forward cockpit option there is a central helm station with a number of options regarding seating and galley positions. The lightweight composite furniture is covered in wooden or synthetic veneers whilst Sunbrella cushions, Corian worktops and high-end kitchen appliances are included in the standard price.

Almost all owners opt for a spacious “owner’s hull”, which can also include an optional crew cabin in the forepeak that is accessed from the deck. The other hull has a traditional multihull layout with a further two double cabins, ensuring that owners can cruise with six guests plus professional crew if and when required. Both the owner’s cabin and the VIP guest cabin located aft in the port hull have king-size double beds.

The HH60 is an evolution not a revolution and the lessons learnt from the HH55 and HH66 have enabled Hakes and his team to design a refined yacht that can race or cruise in style with both the performance that has made the HH66 such a success on the racecourse and the practical touches that have made the HH55 a capable family cruising yacht.

The base price is $2.8M and the cost rises to around $3.4M with all the options we imagine most clients would want (top-of-the-range sails and electronics, the hybrid drive system, air conditioning, a water maker, sat comms and a host of interior upgrades). For a semi-custom carbon fibre catamaran that provides an incredible cruising platform AND a maxi-size racing option, it’s not bad value at all.