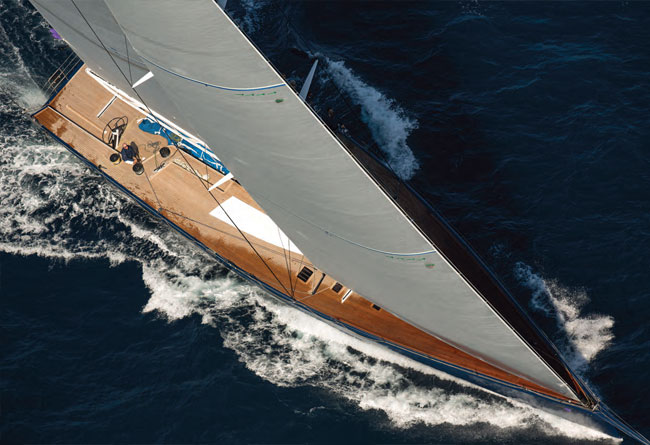 If by a man’s works shall we know him, you’re already well acquainted with Gianni Cariboni. His company has been involved with Wally Yachts since its inception, supplies all the Volvo Ocean 65 hydraulics, and has been involved in every America’s Cup cycle since 2000.

He’s just returned bronzed and relaxed after a holiday in Spain and he’s already back on the case. ‘When I got back this morning I spoke with the New Zealand America’s Cup team, with Luna Rossa and with other customers. The factory is running well. We’ve just started testing a new system for the Solaris yard and we’re also delivering a very interesting system for Vismara’s Nacira V69, a canting and lifting keel – and it’s nearly Friday so everybody’s happy.’

This family-run company’s position at the apex of marine hydraulics has a long backstory, peppered with groundbreaking innovations, but it all began very modestly. ‘My first job was teaching, but I was sailing all the time and in 1972 I got a job as director of production for Canclini, building 4,500 aluminium masts a year for Ton classes and European production boats. I left the company in 1984 and opened a design office. The following year I opened a small workshop making aluminium daggerboards for multihulls,’ Gianni continues, ‘and, in 1986, we made our first aluminium mast, for a C-Class catamaran. Our first hydraulic components were built for the 36m ketch Magdalus III in 1987, two big stainless steel power packs, one for the captive winches and another for the backstay, vang and outhaul.’

Then came a contract that was to transform Cariboni’s fortunes – and, according to the Caribonis, sailing itself. ‘I knew Mr Bassani from years before, when he came to Canclini for a replacement mast,’ Gianni recalls. ‘We made a carbon mast for a 72- footer, and I knew Mr Bassani used hydraulics for the lifting daggerboard on that project because he asked us to replace the original power pack. Then, in 1992, Mr Bassani began the Wallygator project.’

‘Mr Bassani changed the philosophy of the sailing world, along with Luca Brenta,’ adds Gianni’s daughter Paola, also with the firm. ‘We all believe that. Now decks are totally clean.’

‘Mr Bassani is a visionary,’ Gianni adds. ‘When he approached us for the Wallygator project, his first question was about propulsion. He wanted rotating and retracting hydraulic propulsion systems, 160kW aft and 60kW forward.’

‘It was amazing,’ recalls Paola. ‘I was a young girl and when Wallygator was arriving in Newport RI, it was a like a Playstation with a joystick, as the boat came sideways onto the dock. Everybody was looking.’

‘There was also a hydraulic traveller,’ Gianni continues, ‘rams for the main and jib sheets, hydraulic winches – everything. It was Mr Bassani who first used hydraulics in this way and Cariboni supplied everything.’

The next landmark innovation in the company’s history sparked huge demand, but not quite from the quarter Gianni was expecting. ‘Our first canting keel system was for the 60ft Sandro Buzzi CBTF design Junoplano,’ says Gianni. ‘There was a Soling in the US that had a canting keel, and Fiery Cross in New Zealand, but apart from that, nothing. Junoplano was, and is, an extreme boat, and a different concept for us. The keel had to cant 55° both sides using only one ram on a 17-4 PH steel keel fin. It’s a very unusual boat.’

‘After that we got more and more requests for canting keels,’ Paola adds, the next being the Wally Yacht Tiketitan. ‘Gianni’s initial concept for the canting keel was for cruising boats, to keep them flat and as comfortable and safe as possible for families. We didn’t think it would be used for racing, then we realised…’

Canting keels are not without their issues, as we’ve seen on Volvo Open 70s and IMOCA 60s, but Cariboni pioneered an installation method that ensures reliable operation. ‘The loads are taken by the bulkheads,’ says Gianni. ‘For that we supply a jig that fits between the bulkheads at the construction stage, which is removed when the bulkheads are in place so that everything is perfectly aligned for installation. Alignment is critical for canting keel systems. If the alignment is wrong the system won’t work.

‘Our first canting and lifting keel was for Julia, a 43-footer, in 2000,’ says Gianni, recalling another breakthrough innovation. ‘After that we made one for Maiden Hong Kong, a 115ft boat designed by Juan Yacht Design for Frank Pong, and build by DK Yachts in Malaysia in 2003.’

Though it seems straightforward enough now, designing a keel that both cants and lifts must have been a mind-blowing concept initially. Not for Gianni. ‘I divide the problem,’ he explains. ‘The first problem is the canting keel. The second problem is to make it lift. I treat them as two separate problems and solve them both in a way that works in the same system.’

As canting keels became de rigueur in grand prix offshore racing, the company’s stock rose ever higher as Cariboni campaigns swept all before. It supplied canting keel systems for the two ABN boats and Brazil 1 in the Volvo Ocean Race 2005-06, pioneering titanium rams in doing so, the two Ericsson boats and Puma in 2008-09, and Groupama, Puma, Telefonica and Abu Dhabi Ocean Racing in the 2011-12 edition.

‘We have another patented cylinder, which has two perfectly parallel cylinders,’ he adds. ‘In 2000 Luna Rossa needed a cylinder inside a spreader to move the jumper, but all the cylinders powerful enough were too big, they would have to go outside the spreader, which creates aero drag. I came up with two parallel titanium cylinders with two rods, a solution light and small enough to go inside the spreader.’

‘The problem then was that no milling machine can guarantee absolute parallels,’ says Paola, ‘so we had to buy a plunge electric discharge machine that uses electricity to remove layers of molecules with extreme precision. It’s slow, but the double cylinder came out exactly as designed.’

Part of Cariboni’s success is listening to feedback, understanding how equipment is being used and refining the design for that application. ‘It’s really important that we get feedback from those actually using the equipment,’ says Paola. ‘It really helps us to improve our products. We can perform all sorts of tests in the factory, but we use it in a in a completely different way, from the way they’re used onboard.

‘During the Cup in San Francisco, the valves we had on Luna Rossa and Team New Zealand were being actuated so many times that the shafts of the valves were showing signs of wear. We couldn’t simulate that – 20 years of use in a matter of weeks. Their feedback helped us to change the materials, from titanium to stainless steel, then EC100, to solve that problem. There are thousands of examples of this evolutionary cycle.’

It’s easy to see the pride Gianni and Paola take in their work, the satisfaction gained from a problem solved and a job well done. Asked about stand-out projects, Gianni fondly mentions Comanche, for which Cariboni supplied the canting keel and hydraulic propulsion, and Oracle’s 2010 Cup beast USA-17. ‘Initially we powered the rotary pumps with grinders, but when Alinghi went with an engine to generate oil pressure, Oracle followed suit, working with BMW to create a fantastic engine with three pumps on the gearbox. All the rams operated at 700 bar, but we made the first hydraulic engine for the winches operating at 390 bar peak pressure, which means high-speed winching. The system we developed for Oracle is found in many boats now, on Magic Carpet 3 for example, which can hoist its gennaker in five seconds.’

There is no doubt that this relentless quest for seemingly insoluble challenges will continue – indeed Cariboni thrives on it. ‘The only thing that is impossible is immortality, everything else we can do,’ concludes Paola. ‘That’s what we always answer, that’s our philosophy. If someone wants something unusual, they always come to Cariboni.’