Skip to content
You are here
Home > Inshore Racing > Matthew Sheahan column: Monsters of the lake

This month Matthew checks in from one of Europe’s most unique and spectacular inland races – the legendary Bol d’Or Mirabaud on Switzerland’s Lake Geneva.

As students back in the 1980s, once most of our cash had been passed over the bar there was very little left to buy magazines. But in 1983 there was one publication in particular that many of my racing obsessed yacht design fellow students bought.

In fact, I still have it. 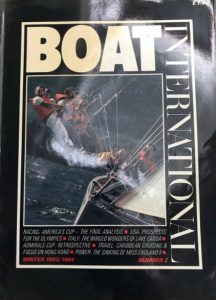 With 8 crew trapezing off wide racks, while their ‘Billy-no-mates’ helmsman sought to keep the boat up the right way as he sat alone in the skinny hull, the pictures blew us away. We had never seen anything like it.

The International 14 was yet to grow a bowsprit, International Moths still floated the right way up when left alone and only Australians knew what an asymmetric spinnaker was. The Sydney harbour 18ft skiffs were the only boats that we knew of that had more than one trapeze artist – the Liberas had eight plus all of the above and were clearly insane.

Thirty six years later they look just as extraordinary, except that now they are no longer the kings of the lake. That title has passed to the featherlight cats that can ghost along in less breeze than it takes to snuff out a candle.

In fact, on the day before the start of this year’s legendary Bol d’Or Mirabaud race on Lake Geneva, I went out for a spin on one of the new breed of foiling cats, the Easy To Fly, (or the ETF as it is now known), a small three crew, 8m long carbon foiling cat, as they practised for the next day.

In just 7-8 knots of breeze we shot upwind at 13.6knots. Downwind we were flying at a steady 23knots. There was no drama, no trapezing and most noticeably, no noise – that’s progress. And yet these are the tame cats.

Come race day, the bigger M2 carbon cats that don’t have hydrofoils were charging along at 16knots in less than 5 knots of breeze across a water surface that was still enough to see your face in it. They sliced along, silent as a paper dart while flying a hull, yet even they weren’t the quickest.

At the head of the fleet the D35 cats and a handful of one off rocket ships like the M1 Ventilo ‘Safram’, had disappeared over the horizon before many in the conventional monohull cruisers had stowed their outboards.

And it’s not just the hot shots that make the world’s biggest lake race for yachts such an extraordinary event.

Each year the many marinas on the lake are emptied of their race boats as their crews flock to Geneva to form a fleet of around 500 boats that all start at the same time, 10am on the dot.

The line is fixed, the breeze is not. This year, the running start meant that as the gun fired, the fleet sprung into bloom as hundreds of colourful kites popped into action as Geneva’s iconic city centre fountain erupted behind them.

The biggest class by far in the Bol d’Or Mirabaud is also one of the smallest, the diminutive Surprise, a 7.65m under-canvassed, (by comparison), monohull with over 100 entries. Winning in this fleet often takes most of the weekend. Completing the 123km out and return course to Le Bouvert at the Lausanne end of the lake is an offshore race at an inland location.

But while the Surprises may take more than twice as long as the carbon cats to complete the course, the fierce competition in the class means that the winner is a true victor and recognised as such.

I have been to this race once before, but never got properly close to it. And now having done so, I can see why it is so popular, so revered and such a big challenge. The latter was especially true this year with a forecast that included flat calm and scorching sunshine to thunder, lightening and 35+ knot squalls in torrential rain.

As visitors it’s easy to conclude that mountain weather is mystery and difficult to forecast accurately on a relatively small scale. In places like lake Geneva the surrounding topography breathes as it wishes. Yet the Météo Suisse forecasters were spot on.

It became clear how much faith the competitors place in their knowledge when, at the opening ceremony on the day before the start the crowd surged forward and went silent when Met man Lionel Fontannaz stepped onto the stage.

In contrast to the conversations and clinking of glasses that had challenged the welcoming speeches, you could have heard a pin drop during his briefing as he outlined the weather for the following day. The only detail he missed was the pea sized hail that shot blasted the fleet when Armageddon struck.

For my part, having charged around the waters just off the city centre and outside the Société Nautique de Genève (SNG), the rest of the afternoon was spent boat spotting and chatting as I got immersed in a techies’ dock walk.

One of the highlights of which was getting to finally see a Libera class monohull in the flesh, 35 years after my first introduction to them. At the dock they still attract large crowds as they are craned off their road trailers and lowered into the water.

They still look extraordinary, but by today’s standards they are heavy, complex and riddled with windage aloft thanks to their IOR styled multi spreader rigs. Their deck layouts are among the biggest clues to an era where human grunt was the answer. Leviathans from another age. Sledgehammers designed to crack nuts.

Yet the funny thing is, that even now they make you stop and think about the things that are driving modern high performance yacht design. Materials and construction techniques have improved dramatically over the last three decades allowing us to do things that were simply not possible before.

Yet on the other hand, you could argue that even back then, the answer was staring us in the face and it was not boats like these. Clearly the racing catamaran concept was around and yet some still saw the future in suspending large numbers of crew at an alarming distance from the middle of the boat.

Mid way through the race the forecast storm arrived wreaking havoc throughout the fleet. The breeze hit over 50knots, the rain was torrential, the hailstones painful and the lightening intimidating in the extreme.

There were capsizes, dismastings and shredded sails aplenty throughout the fleet. Yet, among the chaos many of the lightweight, over canvassed, over powered multihulls stayed the right way up thanks to the skill of their crew.

So too did the Hungarian Libera ‘Raffica’ whose crew not only survived the storm, but went on to be the first monohull to finish, crossing the line in a highly commendable 14th place after just under 16 hours racing.

They had survived by running under bare poles sails, but it had been a nerve-wracking experience.

“We were very scared, for ourselves and for others, we had never had such a strong wind,” said crew member László Török.

Their main rivals, Principessa, another classic winged monster Libera were not so lucky, capsizing and losing their mast. Fortunately all the crew were safe and the boat recovered.

By the end of the race the results said it all, with the first 13 boats being multihulls, times have clearly moved on and yet the spirit of these impressive monohull machines remains.

And I for one am pleased for that.

Even if the concept turned out to be the wrong answer for speed, the Liberas make for a spectacle that still turns heads today.