Skip to content
You are here
Home > Recommended > Matt Sheahan: At the sharp end of offshore 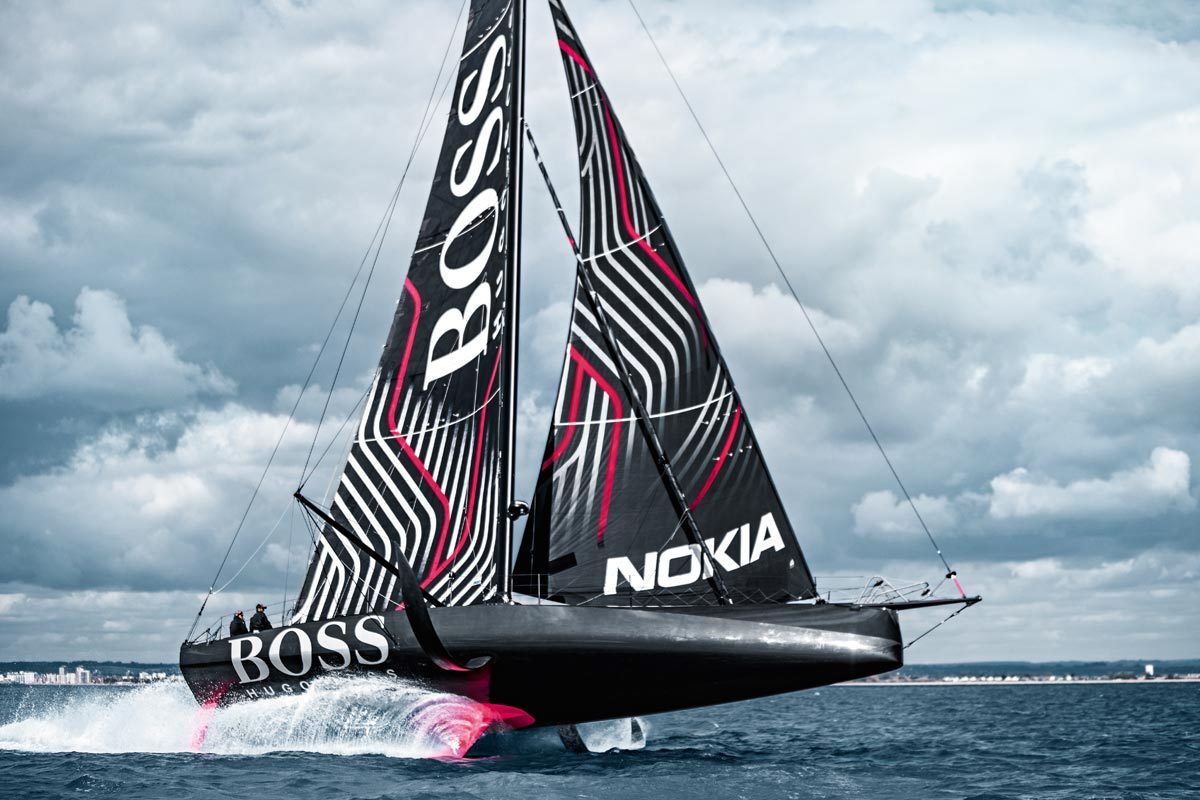 In his latest exclusive piece for Yacht Racing Life Matt Sheahan looks back on his visit to Le Havre, France the start of the Transat Jacques Vabre double-handed transatlantic race and ponders what he learned about the cutting edge of high performance offshore racing.

The latest technology, the wildest looking boats and the biggest fleet for years, there was plenty to look at in Le Havre before the start of the biennial Transat Jaques Vabre – and the crowds thought so too.

For spectators, the opportunity to get close to the world’s most advanced offshore racing machines and their rock star crews as they assembled in one of sailing’s biggest grand prix pit lanes was not one to be missed.

Here, the French are the world’s leaders at drawing a crowd. And when you witness it for real it’s easy to see why. In the week before the start, thousands of spectators streamed in every day and remained well into the evening to be a part of a very special buzz.

But this year the Transat Jaques Vabre has drawn more than just its normal fan base. For the professional world there is far more at stake than a good send off, particularly in the IMOCA60 fleet.
With 29 of the 60 boat TJV fleet total, this is the biggest of the three classes, many of them drawn to this event by the need to qualify for next year’s Vendée Globe.

Getting an entry for this famous singlehanded around the world race is tough. Of the 30 places that are available, (plus four wild card entries), anyone who finished the last Vendee Globe gets an automatic entry which leaves around 8-10 places that are up for grabs. These are awarded on team rankings in the Globe Series, for which the TJV, a double-handed 4,350mile race to Salvador de Bahia, is one of three events that are left to count.

For those like Alex Thomson that already have a place in the Vendée Globe, the TJV is an important opportunity to work up the performance of their IMOCA60s. And while that might sound staggeringly obvious, the potency and complexity of the latest generation of 60 footers makes this an even harder task than usual.

The heart of the issue are the new foils and what they might do for performance.
The first indication of this came last year with the striking images of Jérémie Beyou’s Charal with her hull completely clear of the water.

Now, with plenty of miles under her keel, the silver dream racer is said to be a much better sorted boat than she was at the start of last year’s Route du Rhum and set out this year from Le Havre as the favourite.

Among the other new generation boats and those that have undergone serious refits, many are still going through a shake down process that will take months rather than days. Yet despite playing catch up to Charal, many have hit the ground running and were hitting speeds well in excess of 20 knots on their maiden sail. A few days later and several were reporting 30+ knots with some even talking of how peaks of 40 knots might be on the cards.

In just 12 months the IMOCA game has moved on considerably and the clearest indication of this is their giant new appendages.

The huge and now elegantly tapered foils that sprout from just above the waterline and that stretch across the pontoons when the boats are at rest look more like glider wings than the dagger boards of old.

But the high aspect ratio, high performance, slender carbon blades are not just the reserve of the big budget new boats on the block. Some like Sam Davies’ 2010 Verdier designed Initiatives-Cœur have retrofitted a new set of high performance foils that have breathed new life into a proven platform.

Indeed, Davies and her co-skipper Paul Meilhat were the first to fit these 2019 generation foils and attracted a great deal of attention when they did, especially as there was plenty of previous data on the boat to provide an accurate benchmark.

“After a great deal of work this year, the boat’s performance has increased massively,” she told me. “We’ve been learning a new style of sailing too. Although the boat did have foils before, these ones are more powerful which means it’s another step and there are definitely things to get your head around because we’re going at speeds that these boats haven’t reached before.

“You start to feel the air drag a lot more from the boat and the sail trim is different. Just when you are starting to take off on the foils you have to be really flexible in your sail trim because there are moments when your boat speed can be 8 knots different.

“Whether you’re single handed, or double handed with an autopilot, you can’t trim to keep up with that.”

And therein lies another area of significant development, the autopilot.

Most teams are tight lipped about what they have done, but the behind the scenes chatter is that some are now spending more money on developing their autopilot systems than they are on their sail wardrobes.

Again, this has been another key area in Davies’ campaign.

“We invested a lot in the autopilot last year and I was the first IMOCA boat to run the Madintech system,” she continued, referring to the specialist company that has already made a name for itself producing autopilot software systems for several in the Ultime class.

“The autopilot is incredible. It steers faster than I can and has made a massive difference.

“Paul [Meihat] comes from Olympic sailing and when I first brought him on I showed him the ‘super mode’ setting and how it just sends the boat downwind with the big spinnaker up. While he was impressed, he was also a bit shocked and disappointed and joked about what was left for him to do.”

But it’s not just the shorthanded sailors that are looking closely at the performance and the technology of these boats. With the IMOCA60 class set to take part in the Ocean Race, there is plenty of interest from those looking to mount a fully crewed campaigns come the start in 2021.

Charlie Enright and Pascal Bidegorry’s 11th Hour Racing is a perfect example. Unlike most of the others in the TJV fleet, their project is not about preparing for the Vendée Globe. Instead, their focus is on planning for a fully crewed lap of the planet. And there’s plenty to sort out, not least of all is where to put five crew and an on board reporter. On most current 60s, two is snug and four is a crowd.

On Alex Thomson’s radical Hugo Boss where the entire boat is sailed from an enclosed cockpit that feels remarkably similar in proportions to that of an Airbus 320, six is out of the question.
And when it comes to the fully crewed race, Thomson thinks there could be a problem.

“The Ocean Race came to IMOCA because they had to. There was nowhere else to go,” he said.

“And my personal opinion, which is maybe not shared by other people, is that I think it’s a real shame that the race has ended up the way it has because it essentially excludes teams like ourselves from being able to compete. It’s too long. It’s too expensive and it’s going to be a difficult event to be able to join into. I think if we can’t do it, I don’t see many French teams doing it.”

This, along with the technical challenges of re-configuring a boat that was designed for one or two crew and that can be sufficiently robust to deal with being pressed by a full crew 24/7 while at the same time adopting technology that swaps human control for high speed are going to be among the big challenges ahead.

And then there’s the issue of whether Thomson’s bold experiment to sail from indoors delivers a better performance. If it does, and there’s plenty of reason to think it just might, we could be on the verge of one of the biggest shake ups in long distance offshore racing that we’ve seen for a long time.