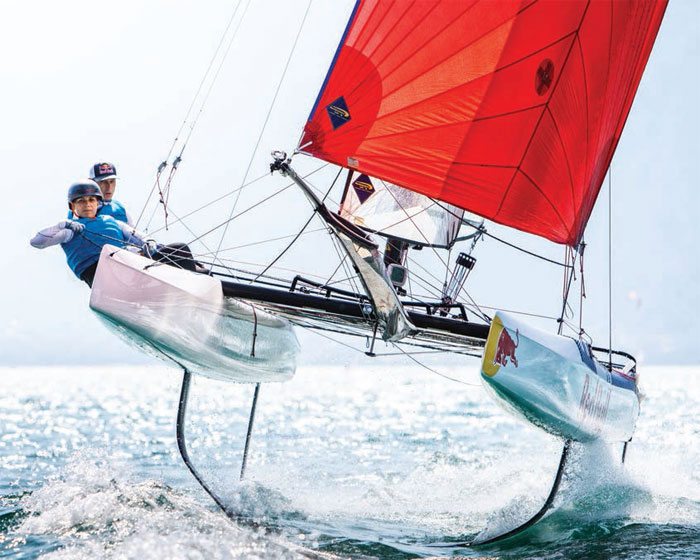 What do you do when even top-grade Dyneema has too much stretch to keep your luff straight? You ask a ropemaker for something even better. Sometimes, though, it works the other way round. Teufelberger, the parent company of Robline and New England Ropes, has a very proactive approach to product development and puts great emphasis on forging close relationships with its most demanding users – including some of the world’s best sailors – to drive its R&D.

Ideas for new products come from conversations with sailors about the shortcomings of existing equipment. These are then fed back to the ropemaker’s engineers, who develop cordage for 20 different market sectors. Often, a solution already exists in house. Crane ropes, Alpine cableways and yacht halyards, for example, have a lot in common so technology and know-how are often transferred between them.

Foiling is a game-changer for ropes as well as sails. With apparent wind always forward of the beam and often above 40kts, the loads on halyards in particular increase massively and luff sag is far more urgent to address. It doesn’t just slow you down on a foiling boat; a tiny amount of sag can make the difference between stable flight and an uncontrollable crash. Aero drag is exponentially more significant at foiling speeds, so it’s not an option to reduce stretch by using thicker rope.

When Santiago Lange needed to eliminate stretch from his Nacra 17 gennaker halyard and tackline for the 2020 Olympics, Rainer Wilhelm, head of Teufelberger’s marine division, was already looking to downsize his Robline STS grand prix halyard rope into a product for Olympic dinghies and Lange was an ideal partner to test the new rope. ‘It’s even harder for me to please a top Olympic sailor like Santi than a leading grand prix sailor,’ Wilhelm says. ‘Working with these guys is rewarding but also extremely demanding. They dedicate their lives totally to sailing, they need to have the best of the best and they test and they test and they test.’

The heat-setting process that gives these ropes their incredible stretch resistance was invented for crane ropes and transferred into halyards for TP52s. Developing a product line for foiling dinghies was more complex than simply scaling it down. ‘As always with ropemaking, one of the most important questions is how to transfer the properties of the core into the cover of the rope, and the cover needs to hold the rope in the cleat,’ Wilhelm explains. ‘It’s not just about creating a zero stretch core, the rope must be manageable on board. You also need to address the holding capabilities of the cleats or clutches.’ So while the core technology could be transferred, a new cover had to be developed.

Chafe was also a consideration, even though the sailors change their ropes every three weeks. For the cover, PBO was combined with Dyneema because, Wilhelm says, ‘the abrasion process and the way it deteriorates over the time of use is very predictable and therefore it creates a very well behaved rope in the cleats.’ For kink resistance, the cover also had to be stiff.

The next stage of development was a huge amount of testing on the water. This, Wilhelm says, is where most of the competitive advantage in ropemaking is, because you can only test stretch and breaking load in the factory; everything else has to be exhaustively, methodically tested on board: ‘We tried many combinations where we changed fibre proportions and the twist levels of the fibres,’ he says. ‘That always changes the behaviour of the rope.’ Diameter reduction was limited by the dexterity of the sailors’ hands: 3mm was the initial goal but 4-5mm was found to be more manageable in manoeuvres.

Lange’s Nacra campaign wasn’t Wilhelm’s only development partner; the ropes were also used by 18ft Skiff champion David McDiarmid for his third consecutive JJ Giltinan Trophy win in 2020. After the Olympics, the product – now called Robline Dinghy Star Pro Ultra STS – was launched and is now available from dealers worldwide. ‘It’s a highly specialised product for skiffs and foiling dinghies so naturally we are not selling that much of it but we learned so much about the fibres, the ropes in general and the behaviour of the materials,’ Wilhelm says. ‘It feeds back into our development of other yachting ropes and there is also important information for our industrial ropemaking division.’