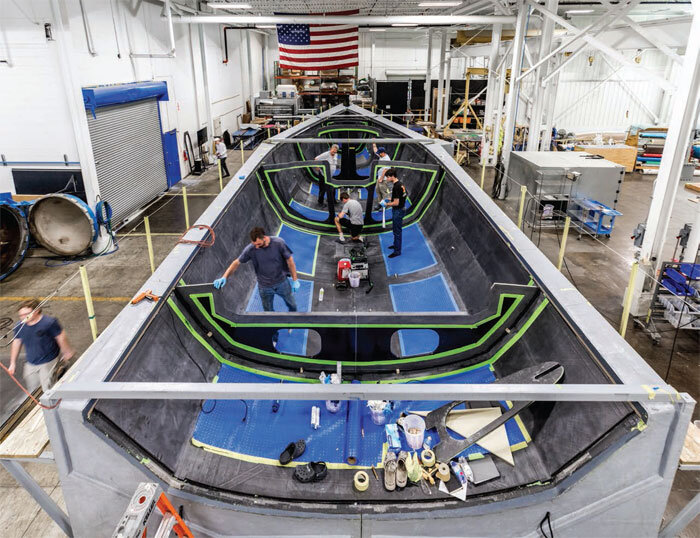 The philosophy and delivery of the DSS Infiniti 52 was always going to ask a lot of the builders and engineers involved in this dramatic new build. And some of the solutions which they identified are genuinely fascinating.

When setting out with the Infiniti 52 to redefine a marketplace that has been dominated for so long by one class, albeit with a very different design brief (windward-leeward in defined wind strengths versus offshore rocket to take on all conditions, all over the world at all angles and strengths of wind, day and night under three rating systems) it is important to not only have design DNA but also the highest level of technical strength, not just in composites, but in systems and fit out.

The consequences of failure in an inshore boat can be expensive, losing a race or even a regatta, but being in sight of land and surrounded by your competitors, umpires, support vessels etc, does allow some mitigation of risk. A thousand miles or more from land, things tend to take on a more urgent complexion should something break, and it is this which is the balancing act all top offshore yachts perform.

Core choices, Nomex or foam is not just a cost and weight/rating decision. Consequences of impact both in damage limitation and spread of further damage is very different for both materials. The ability to make “a fix” either afloat or back on land is again a key part of the decision making process.

There have been notable failures, particularly in the Imoca fleet with engineering solutions re-inventing a wheel that has taken some time to become round and reliable. So, risk averse is sometimes a synonym for smart; and giving your clients the best opportunity to finish the race a sine qua non. Structural failure is never fast and rarely a race-winning tactic.

Working with structural engineers Gurit for so many years and defining how a yacht with so much more righting moment than a conventional sibling can survive tough conditions when being pushed relentlessly is key to the reliability we have seen with all yachts to date. The Infiniti 46 Maverick was able to be pushed far beyond “prudent”, seeing speeds of over 30 knots several times when reaching in the 2018 Middle Sea Race. One of only 30 finishers she ripped around the final half of the course in less than 24 hours and throughout her racing life has never suffered a single structural issue in spite of being driven as if stolen, again and again.

Gurit’s engineering portfolio is second to none, and having learnt a lot from the DSS powered Infiniti 46 Maverick and Baltic 142 Canova, they were well placed to hit the ground running on the engineering side. Experience plays a strong role when engineering such a boat, where success is a function of balancing the performance benefits of optimisation in some areas versus weight penalties of prudence in others. Getting it right not only leads to good racing results, but a psychological advantage for the crew when pushing hard.

Engineering methodology for the DSS foil and supporting structure that was developed through the earlier projects was invaluable for this one. Output from proprietary design tools used to engineer the foil allowed a feedback loop to Hugh Welbourn that was crucial for performance prediction, meaning that structural specification could be in harmony with hydrodynamic performance.

The longstanding relationships enjoyed between the team members in this endeavour allowed for an effective global collaboration where all parties had an investment in the design and a contribution to make in the development and engineering of the yacht. For example, Gurit played an active part in the layout and specification of the deck hardware and underdeck systems. Having knowledge of the behaviour of the composite structure and how it supports the loaded fittings means the structural engineers are able create more efficient structures if they have a hand in the design.

Reasons for the high level of reliability can be put down to sound naval architecture, with intelligent hull shapes that lend themselves to sound engineering practices. Weird tends to be tough to engineer effectively and whilst it might look exciting, there are numerous examples of how certain shapes and fashions tend to have structural reliability issues, no matter who engineers and builds them.

Sound engineering, based on a body of work and seeing previous examples work “for real” and a relationship built over 20 years gives a level of confidence and teamwork that allows for refinement, detailing and evolution with confidence as the last gram or ounce is sought in the optimisation process.

The same holds true for the DSS foils, built since they were first developed by Isotop, in Marans outside La Rochelle in France. With some 30 years of experience in building highly complex structures, including some of the largest superyacht rudders ever built, and a DSS foil for the 142 Baltic Canova that was within one millimeter of tolerance over its entire length, Isotop has been a constant in a changing world.

With zero failures of any DSS foil made, something which in the crash bang wallop of foil development is probably unique, Isotop, working with Gurit and Hugh Welbourn has consistently delivered not just on time and on budget, but a level of excellence which is reflected in the other key components such as the rudder, quadrant and steering gear. How to design, engineer and develop a yacht that has to live up to the marketing is undoubtedly a challenge and striking the balance between risk and reward utterly critical.

Then comes the construction of the composite parts that make up the physical yacht – the hull, deck, bulkheads, stringers and beams. Ensuring that the shipyard is fully engaged in the previous stages is key to having parts that can be built, ideas that can be brought to fruition and a boat that is robust and reliable.

Brian McInnes established Composite Builders just for this reason. With his lifelong admiration of the sea and a background spanning more than 35 years of professional racing and building,

Brian landed back in Holland, Michigan after retiring from the America’s Cup in 2013. Through his career, Brian has had the opportunity to work with the very best builders and yachtsman in the industry and has fostered this experience in creating Composite Builders.

The first question always asked is why Holland, Michigan? After coming to Holland in the early ‘90s to run a local racing team, Brian grew to understand the rich boatbuilding history in the area and the incredible resources that West Michigan has to offer.

Hard working people with a “can-do” attitude, engineering expertise that is second to none and the essential trades that make operating a state-of-the-art composite shop a reality. Michigan’s central location also means that sourcing products and shipping goods are cost-effective and quick, two key ingredients to running a shop of this nature.

‘We started Composite Builders not to be the best custom boatbuilding factory, but to be the best composite factory, period. As we continue to grow, we have succeeded in aerospace, automotive, energy, sporting goods, and building state of the art boats like the Infiniti 52.

When Infiniti Yachts approached Composite Builders about constructing this new take on a 52ft racing yacht, we were intrigued by the concept, styling and performance numbers presented. After the design was put through the wringer by rules and rating experts, the consensus was clear, this boat was going to be a weapon. Just the sort of project we would love to sink our teeth into.

‘We immediately got started with preparing the appropriate female tooling for the hull and deck and getting materials ordered for the construction of the yacht. As with any new boat project, a great deal of time was taken to assure that the engineering, sail design, and mast and rigging teams all had time to get the ducks in a row before we got the nod to start construction. This boat is designed to be flogged at pace in the middle of the ocean, so best to work through any of these issues now’, says McInnes.

The build team at Composite Builders is working meticulously to assure every layer of cloth, de-bulk and cure cycle are done with absolute care, and we are seeing the boat taking shape. The hull is now complete, and the internal structure is being painstakingly fitted and bonded to the inner skin of the hull.

The whole team at Composite Builders is very excited to see the boat hit the water and be able to put her through her paces on Lake Michigan before she heads overseas for her first series of races.

The culmination of all this energy, passion and hard work is a yacht that fully expects to deliver what it promises. Exhilarating performance for a crew that is typically 25-30% fewer people than a conventional 52ft racing yacht. For the Transpac that means seven people on board, for a more rounded course, then nine, and for a humdinger then you might consider 11… compared with 15 under IRC rating. That is an awful lot of lunches, flights and hotel rooms over the lifetime of the yacht!

There is a belief that to perform well under IRC you have to sail a yacht with the complete crew complement and with many designs, that may well be true. However, the Infiniti 46 proved that under IRC, ORC and ORR that was not necessarily the case. Class wins under IRC and ORC and an overall win under ORR in the 2019 SoCal 300 made people sit up and think that maybe, there was another way to step up (or down) in size and not be feeding an army just to go sailing. 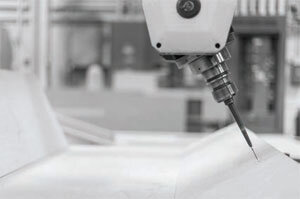 The Infiniti 52 is designed to be fun, seriously quick and to tick the boxes the owners have asked for: namely, not having to take an entire rugby team sailing just to find enough stability to sail to the rating.

Foils are another hot topic. How to maintain them, what to do with them, how to service the boat and so on. All of which are part of the design and engineering process; ensuring that as far as possible all parts are “off the shelf” and no captain is left fuming that a part was installed without it being very clear how it is to be uninstalled and serviced. 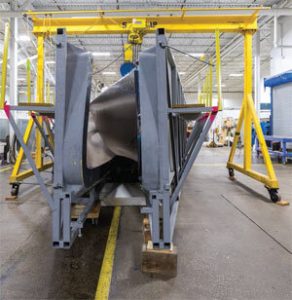 The fun part, however, is sailing. Sailing with DSS is not complicated, proven by the success of the yachts, campaigned by largely Corinthian crews. Beautifully balanced, with increasing righting moment the faster you go, what’s not to like? Just prior to the aforementioned Rolex Middle Sea Race on the Infiniti 46 the team was approached by a highly experienced Volvo/AC/Imoca sailor, concerned that with the forecast of 30-40kts would they still be starting the race? When it was confirmed that they would be starting, he said ‘but surely not using the DSS foils?’

This massive misconception about use of DSS foils in tough conditions is frankly shocking. The well-documented fact that when the going gets tough in an Imoca the foils get taken in is completely contrary to the experience of sailing with DSS foils. The team pointed out that if they ended up with bare poles, they would still be using the foil! One of the two finished the race and the other ended up in Sicily with structural problems – one of those funny shaped boats…