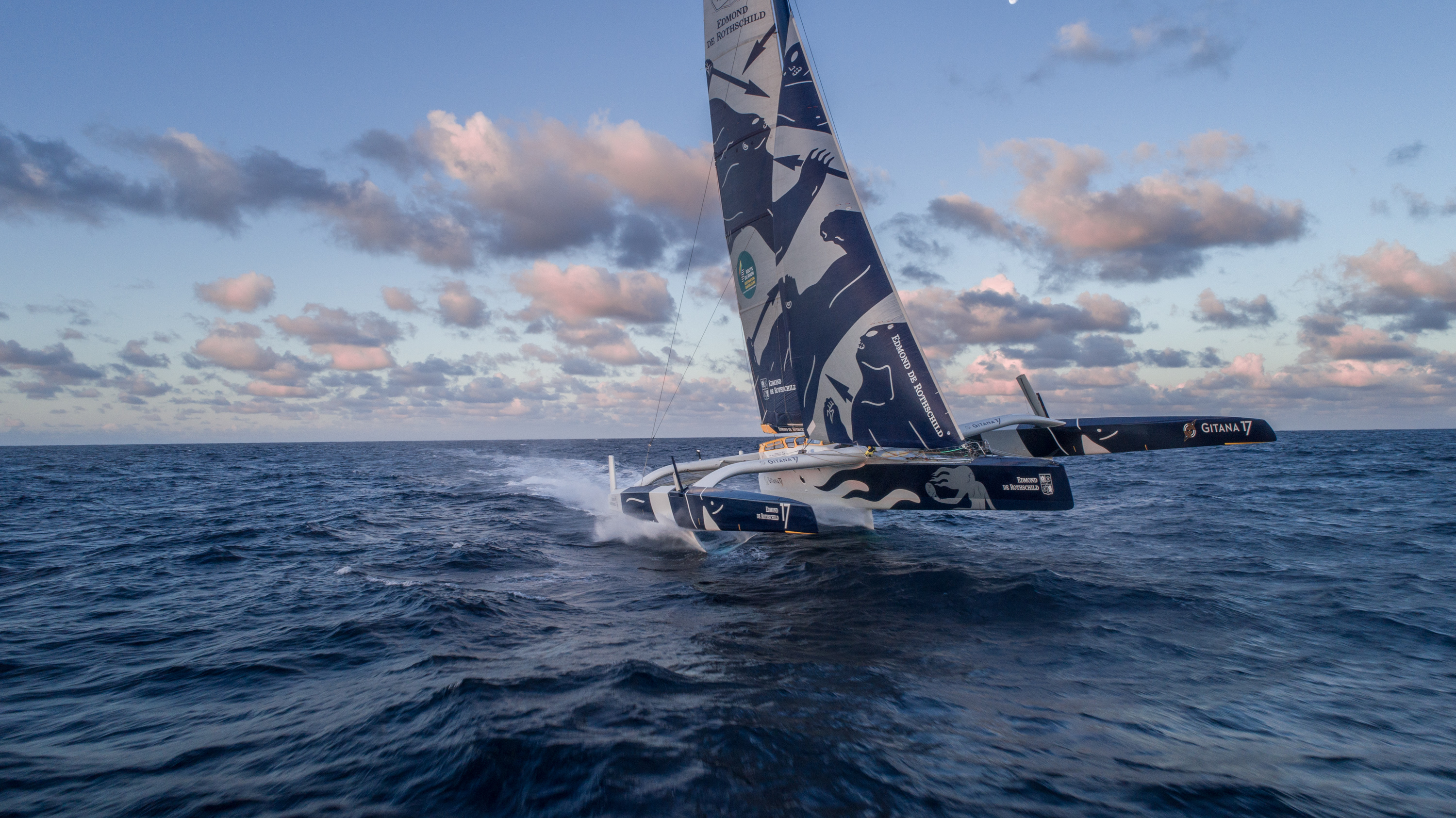 The first ever single-handed race around the world in the giant Ultim multihulls will take place in 2023, 15 years after the vision was originally conceived. The race will be organised by OC Sport Pen Duick in collaboration with the Class Ultim 32/23 as well as the skippers and owners of the world’s most highly advanced and exciting ocean-going race boats.

An incredible test of both man and machine awaits the skippers, in a race which will no doubt create the greatest heroes of ocean racing. The coming together of these 32-metre giants promises an extraordinary sporting feat that will be shared with people around the globe, guided by strong core values of surpassing oneself, humility, commitment, perseverance, and ambition. The adventure, talent and shared emotions will place the event at the heart of sports conversation and mark a significant moment in the history of ocean sailing.

The long-awaited summit
The concept of a solo, round the world tour for these multihulls was first envisioned more than 15 years ago. However, the idea that these marvels of ocean sailing and innovation could chase the winds around the globe has taken time to come to fruition – and for good reason. The balance between technical development, reliability, and an ambitious programme is extremely complex. And so, the first edition, to be held at the end of 2023, is the fruit of many years of work to establish such a revolutionary event.

“We are very happy to see this project come to life. Together, we will be able to prepare for this round the world trip and give this magnificent race, which is both very human and highly technological, the breath it deserves. Jean-Bernard Le Boucher, newly appointed General Manager of the Ultim 32/23 Class will have, among other missions, that of supporting this great and beautiful challenge,” said Patricia Brochard, President of the Ultim 32/23 Class.

“It is with great joy that we are pleased to announce the confirmation of this great project, the organisation of the single-handed round the world race in a multihull. Everything has come together after many years of reflection and joint work to make this event a sporting, media and public success,” commented Edouard Coudurier, Chairman of Groupe Télégramme and Roland Tresca, Chairman of Pen Duick and Deputy CEO of Groupe Télégramme, owner of OC Sport Pen Duick.

A common adventure
The creation of a race of this magnitude – which marks the start of an exciting new chapter in ocean sailing – has been made possible thanks to the joint efforts of the boat owners and their skippers, the Class and OC Sport Pen Duick’s expertise in event management.

“More than 40 years after the first edition of the Route du Rhum, the announcement of the Ultim round-the-world solo race is reflective of the pioneering character and know-how of OC Sport Pen Duick. We are delighted to be able to now start working with the boat owners on the implementation of this superb project which will undoubtedly be a milestone in the history of sailing,” stated Hervé Favre, President of OC Sport Pen Duick and organizer of the Route du Rhum-Destination Guadeloupe and The Transat CIC.

While the choice of the start and finish host city has not yet been decided, discussions are underway with the City of Brest, which has shown keen interest in hosting the event since the creation of the project.

Quotes from the Skippers / boat owners:

Cyril Dardashti – managing director of Gitana France:
“This race is part of the objectives we set for ourselves in 2017 by building – and then launching – the Maxi Edmond de Rothschild, the pioneer of this generation of flying giants. It took a little patience for the first edition to see the light of day, but today we can make this announcement! The arrival of the new maxi-trimarans was accompanied by a technological breakthrough and so it was important to allow time for this first event to live up to the magic of these boats. Beyond the incredible sporting performance that the sailors will accomplish on this inaugural round-the-world trip, it will be an extraordinary challenge to take up. We are delighted to be able to draw on the know-how of OC Sport Pen Duick as organiser for this great premiere.”

Charles Caudrelier – skipper Maxi Edmond de Rothschild:
“This solo round-the-world race in the Ultim is a dream I didn’t even dare to hope for in my career. I have always been very drawn to the Vendée Globe, but here, at the helm of the fastest boats on the planet and in flying mode, it is quite simply the ultimate challenge. Leading such a boat alone on such a demanding global course is an extraordinary adventure that I am really proud to share with the Gitana Team and on the Maxi Edmond de Rothschild. I have been thinking about this world tour for 2 years, it is this goal that motivates me and keeps me moving forward every day.”

Thomas Coville – skipper Sodebo Ultim 3:
“It is a privilege to be part of this group of sailors associated with exemplary partners. With Sodebo, we have been thinking about this race since 2007 when we launched the construction of the first Sodebo Ultim trimaran.
There were a lot of twists and turns in the creation of this race around the world. We had to be patient for the project to mature, which shows that we are all interdependent. On the day of the start, we will all be happy to have carried this idea.
This race justifies 20 years of commitment and high-level sailing. This is the race that will consecrate the life of an athlete and a sailor.”

Armel Le Cléac’h – skipper Banque Populaire:
“I am delighted to see the Ultim’s programme structured around major sporting events that are very motivating, and which will also create superb sporting moments for all enthusiasts. Our boats are magical, and I am happy that we can share them with the public around great adventures. I can’t wait for it to start!”

Emmanuel Bachellerie – managing director and owner of Brest Ultim Sailing:
“These exceptional trimarans have deserved this solo race for a long time. They were thought out, designed, financed, built, and developed for it. Now that it is finally happening, the race will deliver its outcome after 40 to 50 days at sea – or more, or less… That is the magic of the sea and may it continue to remain so; that is to say, an exceptional adventure that we cannot predict.”

Samuel Tual – president Actual Leader Group:
“This round-the-world race is the culmination of our shared project with the Ultim Class. It will be an exceptional event. Exceptional for our skippers who will have to take up an unparalleled sporting and technical challenge aboard boats with performances like Formula 1. Exceptional also for all the public who will follow this race and the extraordinary adventure of talented sailors who are capable of extraordinary things. I am delighted that we have succeeded in creating this event which I hope will make ocean racing history.”

Yves Le Blévec – skipper Actual Ultim 3:
“The confirmation of this single-handed round-the-world race for Ultim’s is very good news that we were all impatiently awaiting. Beyond the sporting challenge and the preparation that is required, I am proud to be able to be part of this with Actual Ultim 3, which promises to be very challenging. We are going to live an extraordinary adventure with exceptional sailors, on exceptional boats and with partners who have demonstrated the strength of their commitments.”