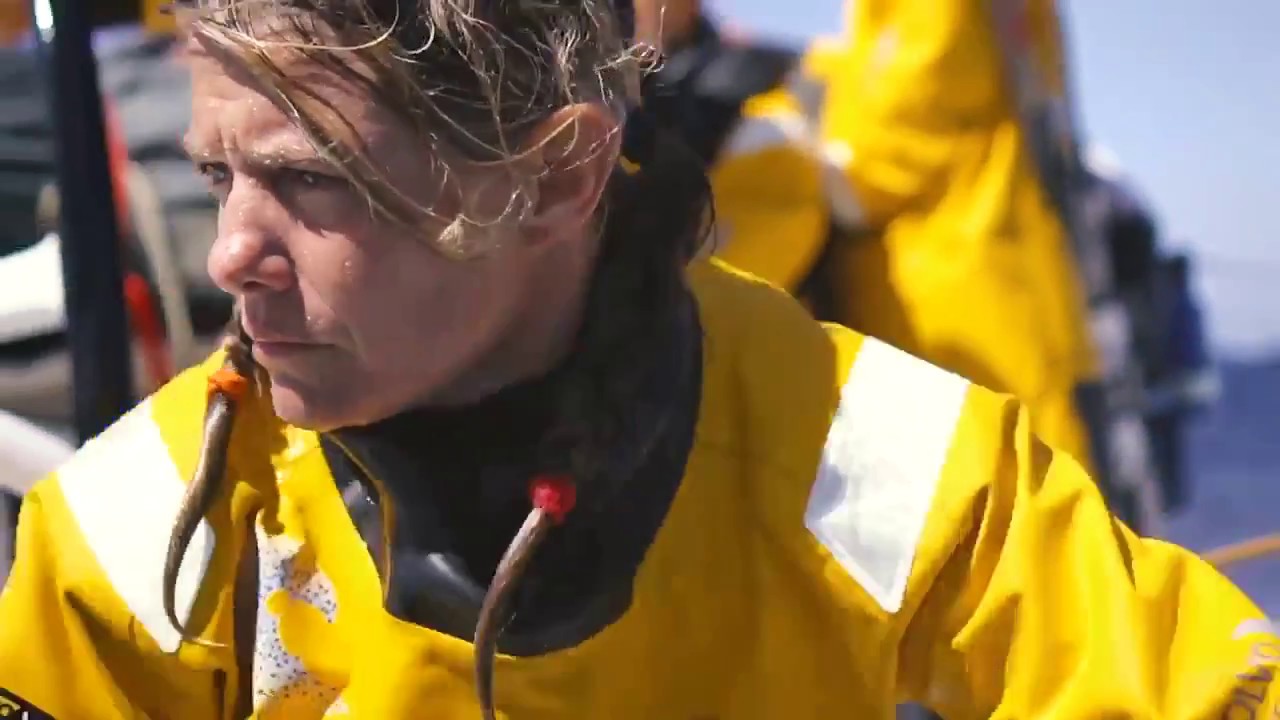 The sheer extent of microplastic pollution in the world’s oceans has been making global headlines. What you may not know is that a lot of the raw data behind the headlines was provided by one extremely busy woman.

Google “microplastic pollution” and you’ll be served up a dire litany of deeply-concerning articles about a type of pollution we didn’t even know existed five years ago. Plastic in oceans has delivered a highprofile shaming of our poor ecological husbandry since the discovery in 1997 of the Great Garbage Patch in the North Pacific Gyre.

What we now know is that this plastic breaks down into tiny fragments less than 5mm long and ocean currents distribute it so efficiently that there is not a single unpolluted patch of ocean left anywhere. And we know this distressing fact because of the innovative science programme launched and implemented by the Volvo Ocean Race 2017-18 – with Liz Wardley as a hands-on collector of some of these ubiquitous, yet elusive, plastic particles.

‘The science programme brought together an elite scientific consortium to capture data that will contribute to a better understanding of the world’s oceans and climate,’ says Anne-Cécile Turner, sustainability programme leader for the Volvo Ocean Race. ‘These organisations are brought together by the Volvo Ocean Race sustainability programme in order to increase ocean knowledge, pioneer a new area of data collection and advance the technology of instrumentation to create a global map of standardised data, specifically in the area of microplastic concentration.’

Clearly microplastic has grabbed the headlines, but that’s just one part, albeit a vital one, of a wider oceanic research remit. ‘We were testing for sea temperature, salinity, dissolved CO2 and algae, which give an indication of levels of ocean health and acidification, alongside the groundbreaking tests for microplastic levels,’ explains Wardley. ‘Between all the boats (it was a fleet of seven), we also launched 28 drifter buoys to capture a range of data that will help scientists understand how our oceans function. The information is being used by the US-based National Oceanic and Atmospheric Administration (NOAA) so scientists have a better understanding of weather patterns and the impacts of climate change.’

It’s critical work, but how did she fit this in with her duties as a professional racing sailor? ‘My day was split into four-hour segments, on or off watch,’ says Wardley. ‘When I was the watch, I was the watch captain looking after the performance of the boat, driving in the direction the navigator wanted us to go. When I was off watch I put on my boat captain hat and did boat checks and preventative maintenance, charged the batteries, kept on top of the science programme work by checking the collection units and changing the microplastic filters we used to collect the samples.

‘I had to be very organised to get it all done. I tried to do everything in the first 45 minutes because it’s important to relax, so I ran around like a headless chicken collecting the microplastic samples and the other oceanographic data, but if there were manoeuvres to do then I had to be back on deck so it could be pretty intense.’

Where is the lab on a Volvo Ocean 65? ‘It’s in the starboard safety lockers, next to the batteries, so we had to move some stuff around to accommodate it. If we had to check the pre-filters for weed and other things that may have got into the system, then it was a 15-minute operation. If not, it was five to 10 minutes every two days.’

Surely there have been times, the end of leg six into Auckland for instance, when the action on deck was simply too intense to take samples? ‘For the whole race I only missed two measurements,’ Wardley adds. ‘One because we were in a gybe-fest at an ice gate in the Southern Ocean and the seastate was horrendous – I just couldn’t take the lid off the filtre. The second was because we had a malfunction in the boat’s battery system.

‘It is much more difficult when you’re bracing yourself in the boat and fiddling around with small screws while trying to change tiny filtres. You’ve opened the battery compartment and there’s water coming into the boat. It’s never gone wrong, but there is the potential for something bad to happen. Injury is the main concern as you’re being thrown around and you just want to complete the task as quickly as possible.’

Presumably this is a delicate scientific instrument, how much training was required to use it? ‘Luckily I was working in the boatyard before the race, so I learned about the machine. I was pretty much involved from its inception so didn’t need much more training. Most of the time it was just me, but I had to ask Francesca Clapcich, to help me out for two days when I fractured my arm, but that was the only time I needed help, and I stood over her shoulder giving instructions.

Main picture: Wardley had to juggle her duties as watch leader and boat captain with her data gathering obligations. Despite being bounced around the interior during gybe-fests and other onboard dramas in the Southern Ocean she somehow missed only two recordings in 45,000 miles of racing.

‘In port, the data was downloaded onto a USB stick along with the microplastic samples. A scientist from the GEOMAR Institute for Ocean Research in Kiel took them back to their lab for analysis. The data is uploaded open source so it is freely available to the wider scientific community.’

While racing Wardley focussed on balancing her data-gathering role with her duties as both watch leader and boat captain, but during stopovers there was more time to consider what she was doing and why it’s so significant. ‘We see single-use plastics like water bottles floating in the water as we race round the world. They break down to form these microplastics. Plastic can be mistaken for food by marine life and we’re finding birds and marine mammals unable to digest food because of the plastic, and that can ultimately lead to their deaths. We don’t know the longterm effects of plastics on human health, so more research needs to be carried out in this area too.

‘The fact that we’re finding microplastic in remote places in the Southern Ocean such as Point Nemo is shocking and it’s the first time a project like this has been done. When you hear that pieces of plastic have been identified from where you didn’t think it would be possible, you realise just how important it is. Before we got the results it was all just speculation, but now we are providing a benchmark for future scientific research in these remote places.’

Bearing in mind Wardley and the Turn the Tide On Plastic team were racing to raise the profile of this issue, how much more relevant does her role feel? ‘We committed to the project at the start and we took our role very seriously. We collected data all along the race route and we are really proud of what we’ve done to support the programme. We’re really pleased when we hear about the results in the media because of our efforts. It’s really important. It doesn’t affect the day-to-day life of the team, but they know what we’re doing and the message we’re taking around the world to turn the tide on plastic. It’s so fitting and gives us more fuel for the fire where we’re trying to educate people as to why we need to stop using single-use plastics. We say we’re sailing around the world picking up microplastic from the ocean, so it’s valid for us to say to people that they don’t actually need that straw or plastic bottle.’

Data from the first four legs, analysed by GEOMAR, revealed sobering statistics. Waters off the coast of Spain and Portugal show the highest concentrations of microplastic with 307 parts per cubic metre, and the western Mediterranean is next with 280. There were 152 off Cape Town, 114 in the Great Australian Bight and, perhaps most troublingly, 41 at 45.5°S in the Southern Ocean.

‘I’ve been really shocked by what the data have revealed. We can see the effect plastic is having on our oceans. You see debris constantly and you’re not surprised when you find high levels of microplastic here. But when you go down to the Southern Ocean, or the middle of the Pacific or Atlantic, and it’s pristine blue water with an albatross flying around, there’s no plastic or anything in the water, and you get results back saying there are microplastics in the water… I don’t know how it can be possible.’

‘Working with the Volvo Ocean Race and our grantee UN Environment through its #CleanSeas campaign has provided an unprecedented opportunity to use a global sporting event to transform habits, practices, standards and policies around the globe and dramatically reduce marine litter and the harm it causes,’ comments Michelle Carnevale, programme manager of 11th Hour Racing.

‘This is an exciting new territory and a highly impactful, solutiondriven partnership. The data collected by these professional athletes on these ocean-going racing yachts are a critical contribution to the global research on plastic pollution across our oceans, which will help pave the way for new innovations and commitments by industry leaders and regulators. It’s citizen science at the extreme.’