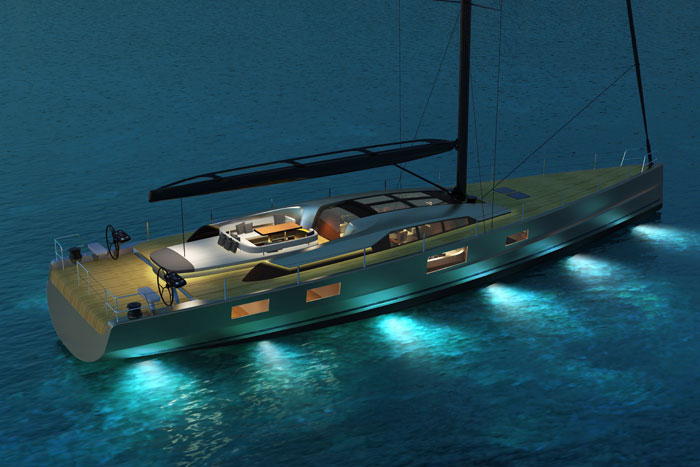 Put designer Malcolm McKeon together with McConaghy Boats and the result could never be less than extraordinary – in every sense.

McConaghy Boats have partnered with Malcolm McKeon to launch a range of stylish high-performance cruiser-racers from 78ft to 120ft in length. A conscious decision has been taken to eschew exaggerated reverse sheer lines and other “modern” design clues in favour of a minimalist, understated and slightly classical look. The aim here is to produce a boat whose performance surpasses expectations, rather than a boat that just looks the part.

McConaghy knows a thing or two about building cutting edge raceboats; the company’s reputation is founded on building yachts such as the all-conquering Wild Oats XI, and as a result it is no surprise to hear they are currently building nine AC40 foiling one-designs for America’s Cup teams. This sort of pedigree means they should be taken seriously when they say they want to shake up the Maxi racing scene.

McConaghy may not be the first name that springs to mind when you think of ultra-high-end interiors, but the development of their catamaran range is changing that. There are currently nine sailing and power catamarans in build ranging in size from 55ft to 82ft, and the continued development of this part of the business has provided the perfect opportunity for the company to broaden its expertise.

As managing director Mark Evans points out, ‘building up the expertise to deliver the highest level of interior finish internally has been one of our biggest priorities in the last few years. I can now honestly say that we can deliver a level of interior finish that is better than any other production boatbuilder and equivalent to the very highest level of custom superyacht manufacturers.’

There are very few (if any) boatbuilders with this pedigree in grand-prix race yacht builds that can make such a claim, and this could make the Makara range very special indeed.

McKeon’s pedigree is equally impeccable, having worked for many years alongside Ed Dubois before setting up on his own. Since taking the leap to go it alone the yachts he has designed, such as Missy, Liara and Ribelle have been winners in every sense, taking home numerous superyacht design awards as well as class wins in events such as the Maxi Worlds and St Barth’s Bucket.

The first model to be launched will be the Makara 78, and at just below 24m this length avoids costly regulatory issues associated with larger boats as well as placing it at the top of the IMA’s Mini-Maxi 2 fleet (for now at least). There are very few IRC-optimised cruiser-racers in this size range; the current fleet includes numerous series-built 60-footers, the remnants of the Mini-Maxi 72 fleet, and custom-built superyachts typically closer to 100ft in length. This leaves an open goal for anyone looking to get clear air at the front of the fleet which McKeon, McConaghy, and the ambitious owner of Makara 78 #1 may well be aiming for.

The Makara range will feature pre-preg carbon and Nomex hulls as standard, which is rare even in boats at this size and price point. The first 78 has a retractable propulsion system, 1200L of water ballast per side and a lifting bulb keel that extends to a draught of 5.2m. Combining this water ballast and draught with a 6.3m beam and twin rudders should make the Makara 78 a real weapon as soon as the sheets are eased and help her to be as competitive in the classic 600-mile offshore races as she will be whilst racing inshore in the Mediterranean. Whilst this beam is around 10 per cent higher than most of the yacht’s key competitors, it remains in line with the latest thinking from many leading superyacht and IRC designers.

The base boat includes a keel-stepped standard modulus Southern Spars carbon fibre mast with four pairs of swept back spreaders and nitronic rod rigging. Boat number one will be fitted with a state-of-the-art high-modulus rig and EC6 rigging due to its racing focus, although at the other end of the spectrum furling booms are also available for clients who place a greater emphasis on convenience whilst cruising. All yachts in the Makara range feature a self-tacking jib track sleekly integrated into a curved coachroof designed for the job, but with racing in mind boat number one will opt for overlapping jibs as well.

Push-button controls connected to an extensive hydraulic system will power Harken winches and other sail controls. This will enable shorthanded cruising and also high-level racing with a slightly more manageable crew than would otherwise be needed.

The interior is extremely customisable, and only limited by the placement of a small number of structural bulkheads and a client’s imagination. Increased interior volume is a nice side effect of making boats wider and the four different interior general arrangements proposed by McConaghy all feature substantial crew accommodation plus cabins for six to eight guests. Cruising comforts such as air conditioning and heating come as standard. McKeon has become known for extensive glass superstructures, and this signature style is kept alive in the Makara range with an enormous skylight running the length of the coachroof.

Below: With twin rudders, water ballast, a full carbon rig and very light displacement for a cruiser, the Makara 78 should be a potent weapon on the maxi racing scene

McConaghy Boats selected superyacht specialists M2 Atelier as the interior designer, and have briefed them to ensure that the saloon, master cabin and guest cabin will be finished to the highest imaginable standards, with thin exotic wood and gunmetal trimmings covering carbon-Nomex furniture. The rest of the interior will be functional but ultra-lightweight due to the client’s focus on high performance.

The cockpit makes outdoor dining a priority with a central table and seating area, and the corridors between this area and the coach roof will also make moving around at sea safer than a wide-open arrangement. As with every other part of this boat, it is obvious that a huge amount of thought has gone into the design. The teak decks flow over a curved transom in typical McKeon style to round off a boat that should be beautiful, practical and fast all at the same time.

Some cruiser-racers make great cruising yachts, some make great race yachts, but only a select few succeed at both. The McKeon / McConaghy partnership seems to have all the ingredients to make both work, and we look forward to seeing Makaras strutting their stuff in Porto Cervo or flying around the Caribbean 600 course soon!