Skip to content
You are here
Home > Recommended > Legend 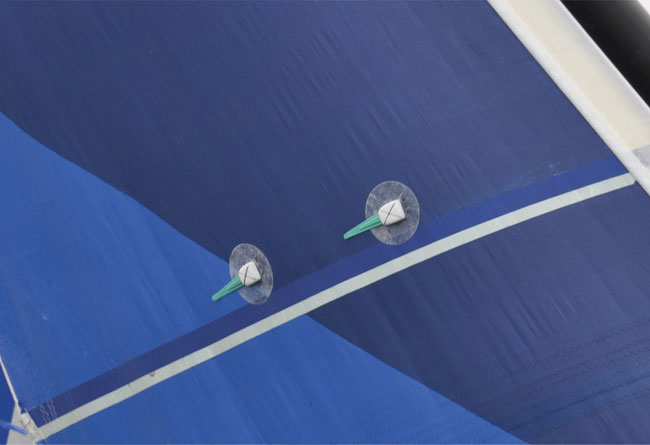 An interesting innovation for offshore sailing comes from France, where digital technology is married to one of oldest tools in performance sailing: telltales. With this clever product from Mer Agitée, the offshore sailor can remain in perfect trim in any wind and sea conditions.

In an age where nearly everything is digitised, one would have thought that the simple act of steering the boat and trimming the sails to the guidance of telltales would remain an analogue activity. We were taught as young sailors to adjust our trim and/or our course to where these simple indicators of laminar flow over the sail membranes were streaming straight aft with no dancing or stalling, and we’ve been trained to use this a priori knowledge for steering and trimming ever since.

There are problems with this simple approach: you can’t see telltales at night without a high-powered torch, and even in daylight, some boats are so large and their rigs so high that the small yarns or ribbons are just not visible from the deck or cockpit.

Now Dimitri Voisin and his team in France have devised an elegant digital solution for this problem called TrimControl, and yes, these are digital telltales. But how is this possible?

Voisin and his colleagues have found a clever way to enclose a highly accurate motion-sensing device within a slim, tapered piece of silicone rubber that is attached to a rectangular base unit which is glued in place to the membrane of the sail. This sensing unit is only a few cubic centimetres and has the electronics needed to transform the telltale’s motion at a rate of one hertz (one reading per second) to digital signals that are received via a local network by a base unit, which is usually located in the boat’s nav station.

The base station in turn connects to an android smartphone where the TrimControl App gives electronic telltale values in real time and Adrena navigation software records the data and statistically analyses it so that significant variations are noted and given values to display. When the angles of the electronic telltale vary widely beyond an established mean, the flow is interpreted to be turbulent due to the sail being under-trimmed (or the apparent wind angle of the helm is too narrow for the trim). These values are put on display for the skipper/navigator to see.

Conversely, a stall condition is shown as when the telltale is making a high angle to the membrane surface and remaining constant with little flow. In either case, Voisin says at least 10 knots of apparent wind speed is needed to get best results from this installation.

The so-called “e-telltale” is rugged – it’s been tested at the end of windmill blades at speeds of 300 km/hour – and durable, able to be furled, packed and stowed with no effect on accuracy. The material base that is glued to the sail’s membrane can adhere to any laminate or woven surface texture, whether its film, taffeta, or any hybrid material in between. This makes it equally useful for either racing or cruising sails, and while its primary application at this early stage of product evolution is on headsails, the e-telltale could be installed on mainsails or code zeros as well.

Product testing and development has been on a variety from boats, from Pogos to Imoca 60s, with a pilot project having been done in the last Giraglia Race with use of these telltales installed on their J2 headsail onboard SMA. Here distinct flow regimes were identified and displayed in the Adrena software, and statistical analysis of the recorded e-telltale showed defined conditions of rest, attached flow and turbulent flow.

Voisin and his development partner François Gabart, the skipper of the maxi trimaran MACIF, have been working with Gauthier Sergent of North Sails to understand more fully how recorded e-telltale data could become an important feedback loop to assist in optimising mould shapes in sail design.

‘I also see this being a tremendous value in the Volvo or America’s Cup,’ says Voisin, ‘where sensors are on everything related to the rig and sail plan, and now there is a device that logs some critical data related to airflow around the sail plan.’

There is also some development work being done with NKE to link autopilot systems to not only the apparent wind angle being measured and recorded from the masthead instruments, but the real-time angle of the sails themselves to the wind.

‘This new tool has many benefits for the offshore sailor,’ says Voisin. ‘As we know, offshore races are often won by those who have made fewer mistakes, rather than those with outright speed advantages. The e-telltale’s role in performance optimisation is a new and evolving story.’

Click here to hear what Michel Desjoyeaux had to say at the Yacht Racing Forum 2018 about the IMOCA/Volvo Ocean Race merger.