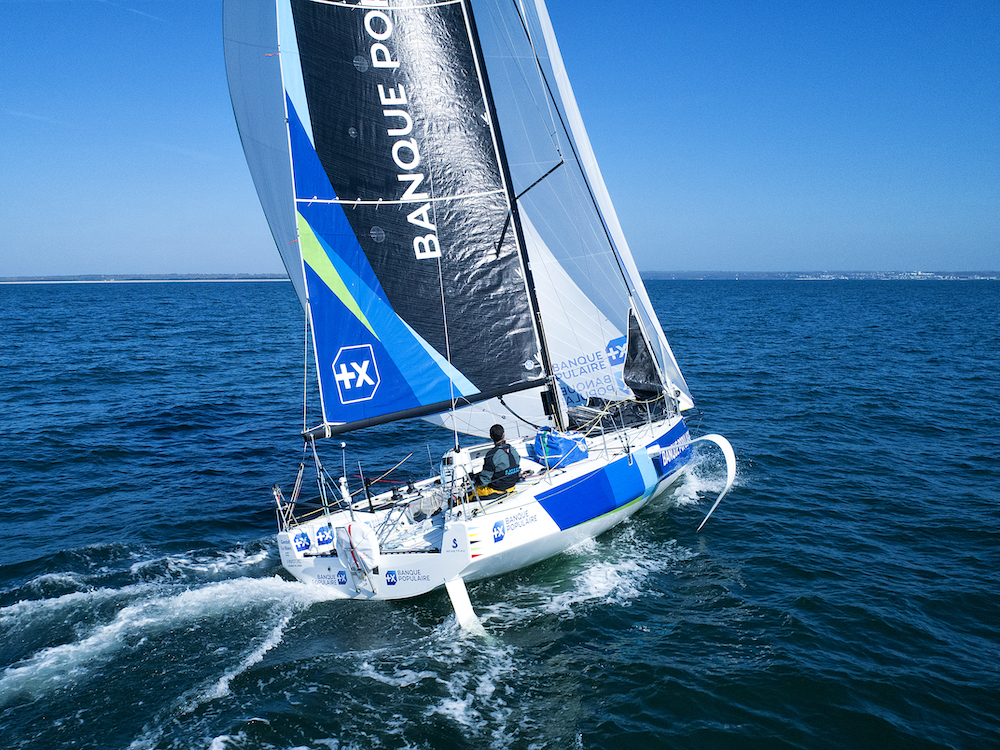 French yachtsman Armel Le Cléac’h is going back to his sailing roots this season as he takes on the legendary Solitaire du Figaro – the de facto proving ground for solo ocean racing skippers – for the first time in six years.

Le Cléac’h has won the Solitaire twice – in 2003 and 2010 – and since has finished second twice in the Vendee Globe solo around the world race before finally winning it in 2016-17. More recently he skippered of one of the world’s largest ocean-going racing boats – the ill-fated Banque Populaire Ultim trimaran which capsized and broke up during last year’s Route du Rhum transatlantic race.

Now while another Banque Populaire Ultim is being built Le Cléac’h will return to the Figaro circuit albeit in a very different looking boat, the Figaro 3 – an updated foil-enabled version.

Le Cléac’h is currently en route from Port-la-Forêt on a solo passage to Les Sables D’Olonne where later this month he will compete in the Solo Master CoQ the first of two warm up events he has scheduled ahead of taking on the fiftieth edition of the three-stage La Solitaire URGO Le Figaro in June. Unlike many of his rivals Le Cléac’h opted not to take part in the recent double-handed Sardinha Cup, preferring instead to focus on solo sailing. Nevertheless he has been training hard to familiarise himself with the new Figaro 3 which was only released to the eager community of Figaro sailors at the beginning of the year.

“I have been sailing since the end of February out of Port-la-Forêt,” he says. “I took part in training courses at Finistère Pole and have already spent a lot of time on the water to find my feet, test the sails and electronics, and try out maneuvers.

“In Figaro 2, we all had our bearings on board, but the Figaro 3 nobody has found the keys yet to get the boat moving quickly at all wind speeds. There are a lot of possible settings, so you have to relearn things and search for the fine details that make the performance difference. That is the challenge this time with La Solitaire.

“The boat feels good, but like everyone else we faced some technical problems with the rigging. [Ed. Reported problems with the spreader brackets that have had to be universally replaced]. But these early issues are being sorted out.”

“That’s thanks to the large asymmetric spinnaker,” he notes. “Over 15 knots of wind the foils feel really nice and you can easily reach fast speeds. But the boat is wetter and more physical than its predecessor. Also, the deck plan is very low, which is not easy for big guys like me down below. But I will adapt!”

Le Cléac’h says he expects the boat to be challenging for a solo skipper to race with plenty of sail changes and little opportunity to sleep.

“When you are going fast on the foil there is a real gain to stay at the helm – so there is no incentive to put the boat on autopilot and to rest. Also, there are more sails than on the Figaro 2 so I can imagine having to make more sail changes between the gennaker, the little spinnaker and the big spinnaker.”

Despite having become one of the world’s best-known racing sailors and a household name in France Le Cléac’h has no illusions about the challenge facing him in this 2019 edition of La Solitaire.

“The racing will be very open and of the 50 sailors there will be some old heads returning and many new ones,” he says. “Each will come with their own strengths and weaknesses but for my part, I have some experience of demanding, physical and fast boats which I hope will help me.”

Le Cléac’h says that in a fleet so strong, nothing can be guaranteed – even for someone with his pedigree.

“I will be doing everything to win, but there will be many others doing the same,” he says. “Like always, La Solitaire will be a race by elimination where the one who makes the least mistakes will prevail.”

However, with two stages of the race taking place in Morlaix Bay off Roscoff, – the waters where Le Cléac’h grew up and learned to sail – he should perhaps be able to look forward to some sort of home team advantage as he challenges for a third La Solitaire victory.