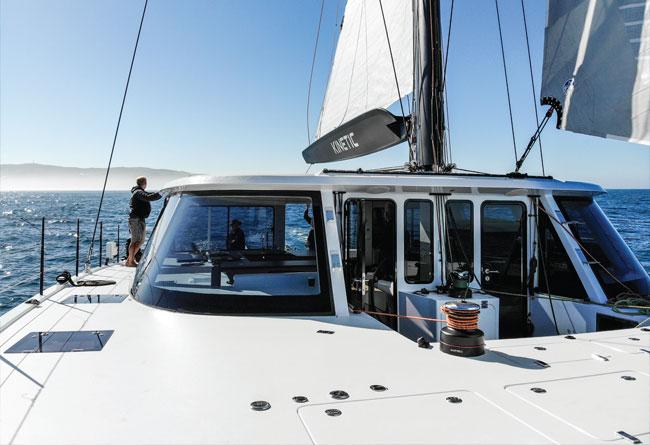 Kinetic is a joint venture between Bob Hayward, a successful entrepreneur, film studio co-founder and keen ocean sailor, and Leon Scheepers, a highly regarded boatbuilder with vast experience in multihull production. The Kinetic brand is new but the shipyard has a huge amount of expertise. It was founded by Phil Harvey, who built the iconic early Gunboats such as Tribe and Safari and more recently produced some of the world’s finest full-custom multihulls at Knysna, with Scheepers managing the shipyard. ‘I was having a custom 60ft carbon catamaran built by Phil Harvey when he told me he wanted to make ours his last boat,’ Hayward explains. ‘I can see a real opportunity and am giving the yard the capital backing to be world class. We’re competitive on pricing and I’m confident we’ll have a good order book. If you see a pathway to success in a sport and pastime you love, why not?’

Hayward took over, made Scheepers a partner, retained the shipyard’s highly skilled staff and switched focus from full custom to semi-custom production, which offers nearly all the advantages of a full custom build without the inherent risks of cost and build time overruns. Hayward’s boat became the prototype for Kinetic’s flagship KC62 – the second of which is already in build – and its designers, the Dutch- South African firm Simonis Voogd, were asked to draw a 54-footer with the same DNA: a competitive racer and fast ocean cruiser that is spacious, fun to sail and can be cruised by a couple. The first KC54 is also in build, with more to follow.

‘Simonis Voogd bring 30 years of practical experience to the table including their work with Robertson & Caine and the Leopard cats,’ Hayward says. ‘They also have a great racing pedigree and are very innovative.’ Indeed the first KC62, launched in July, is bristling with clever ideas and features.

‘We see Kinetic as the multihull equivalent of Swan and Solaris,’ says Maarten Voogd. ‘Performance combined with comfort. To achieve this the hulls are very slender on the waterline but flare out to the chine and from there on beam is maximised to give volume inside.’

The KC62 and KC54 are true blue water cats, Voogd explains: ‘The bridgedeck clearance is high and the hull centerline-to-centerline distance is maximised to minimise interference between the hulls. A lot of reserve buoyancy has been allowed for as we’re still talking about cruising cats. It is better to allow for extra displacement beforehand than to be too optimistic about the final displacement. There is nothing worse than overloading a performanceorientated catamaran.’ For genuine trans-oceanic range the design team allowed for 700-litre fuel and water tanks, fitted with baffles and integrated into both hulls.

One notable feature of the Kinetic designs is that owners get to choose between sensible, fully retractable centreboards and high-performance C-foil daggerboards. ‘We’ve overcome the issues that earlier boats had with their centreboards,’ Hayward says. ‘They are raised and lowered using a line driver and have a weaker line section that acts as a fuse and breaks if we hit something. Replace the fuse and you’re back sailing. The centreboard may need a bit of a nose job but it’s a much easier repair than hitting something with a fixed daggerboard. A secondary benefit is that it enables us to move the point of lateral resistance when sailing off the wind.’

Centreboards make perfect sense for go-anywhere cruising but regattafocused buyers will want the C-foil daggerboards, which can generate up to two tons of lift. ‘They have a practical function as well as a performance one,’ Voogd explains. ‘We have matched the rate of curvature to the outer shape of the hull so they are the least obtrusive inside. We’re using a high-lift asymmetrical section we developed in-house, which we’ve used successfully on earlier performance catamarans. The trick being to get a sufficiently wide groove for them to generate lift on a near constant basis. The lift varies, depending on speed and leeway. Its main function is to counteract the sinkage of the leeward hull when it’s pressed hard and the windward hull starts flying.’

How much breeze do you need to fly a hull? ‘It’s hard to be specific, but I would say 15 to 18kts true with a Code Zero,’ Voogd says. And how much of a performance advantage will the C-daggerboards deliver? ‘They will “reduce” the displacement by a solid 10-12 per cent, so you will see a pick-up in upwind speed of about 0.6-0.7kts in ideal conditions,’ he says. ‘Leeway is expected to be the same and the overall VMG will be better by around 0.4-0.45kts.’

Almost everything is built, finished and installed in house for quality control. Only the rig, glazing and soft furnishings are outsourced. The main structures – hulls, bridgedeck, window surrounds and coachroof – are made in standard moulds but the rest is custom built. ‘The forward and aft cockpits can be changed to suit a particular client,’ Scheepers says. ‘The laminate is 100 per cent carbon fibre infused with epoxy resin, including all webs, floors and structural shelves. The only bit not infused is the tabbing.’

The KC62’s deck layout has been kept as simple as possible (although some of the hardware is specially custom made) and all controls and halyards are led to the sailing nerve centre of the boat, the forward cockpit. Just one step away is the primary helm station at the front of the saloon, where the helmsman has all instruments to hand, push-button control of the sails and a big moonroof to monitor sail trim. The aft cockpit is fully geared towards entertainment, with secondary helm stations – either tillers or twin wheels – outboard on the aft ends of the hulls. A lot of work has gone into ensuring the steering is light, responsive and delivers precisely the right amount of feedback.

Buyers can choose a fixed or rotating mast and are free to spec their own rig, rigging plan, furlers, sailplan, sailmaker, and use of hydraulics. Alternatively, they can opt for standard or “turbo” rig packages that Kinetic’s in-house experts have developed in a design loop that involved North Sails, Southern Spars and Rigging Projects as well as Simonis Voogd.

One key difference between the KC62 and some other recent, similar designs is that the mainsheet traveller is on the coachroof, rather than the aft crossbeam. ‘We deem it much safer to keep the aft cockpit clear of highly loaded, sweeping lines,’ Voogd says. The mainsheet is hydraulic and its traveller is controlled by an Antal line driver – the same type used for the centreboards. ‘It’s a feature we devised to clean up the forward cockpit and make the boat easier to sail shorthanded,’ Scheepers explains. The solent jib sheets to the coachroof too, with a self-tacking track in front of the mast step.

Sheeting sails to the coachroof normally incurs a weight penalty because the structure needs heavy reinforcement to handle the loads, but Kinetic has engineered an ingenious solution. ‘Apart from the obvious extra reinforcing athwartships, there are two carbon poles below either end of the main track,’ Scheepers explains. ‘These are strapped onto the main track with unidirectional carbon and fixed through the floor to the bridgedeck. This design feature actually allows us to make the coachroof lighter as the loads are transferred directly to the main structure. We also use these carbon poles as pipes to drain water off the coachroof, to prevent that incessant drip after it rains.’

The electronic systems are designed by Cay Electronics, one of the world’s leading marine electronic engineering firms, which also supervises installation and commissioning, and provides aftersales service. B&G supplies sailing and navigational electronics and Ocean Data Systems’ Upside Up auto-dump system is included as a standard safety feature.

The yachts’ interiors are fully custom made, so anything is possible. Buyers have their choice of interior and aft cockpit layouts, furnishings, fixtures, fittings, colours, equipment, sound systems and more. To save weight the furniture is foam-cored with carbon backing and wood veneers but corners, edgings and inserts are solid wood. Countertops are milled thin and carbon backed to save weight without sacrificing strength. Removable furniture can be specified if the buyer wants to race.

Kinetic cats have yet to prove themselves on the racecourse and it’s fair to say they’ll face stiff competition for line honours in some major events. ‘It’s early days,’ Hayward says, ‘but we’re confident that we’ll be competitive with other carbon cats in our class.’