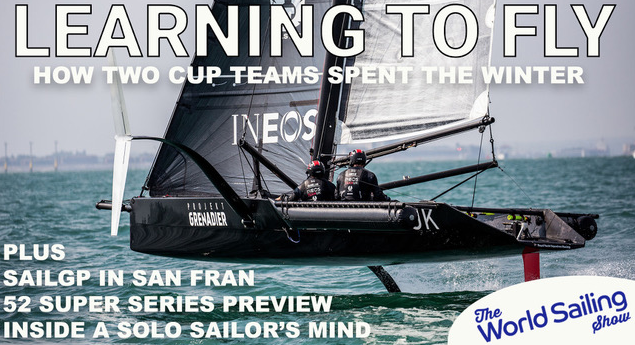 On the June 2019 edition of the World Sailing Show:

Learning to Fly – AC team training
Ask any top team what single factor has the most influence on results and the answer is always the same – time on the water.
Never is this more crucial than when they are breaking new ground. So, as the clock counts down to the America’s Cup in 2021 and the top teams prepare to launch their foiling Cup boats, one of the biggest tasks is learning how to handle sailing’s version of a fully crewed, 75ft unicycle.
Taking their test boats with them, both INEOS Team UK and American Magic moved their bases south for the winter. The Brits went to the Mediterranean, the Americans to Florida.
We find out how their training sessions went and get a glimpse of what it looks like when things go wrong.

Inside the mind of a solo sailor
In 2016, after four failed attempts, Thomas Coville set an impressive new solo circumnavigation record aboard Sodebo. As he approached the finish the toll his campaign had taken flooded out. Twelve months later, his around the world record had been slashed by Francois Gabart aboard Macif.
Now, Coville is back with a new boat and record breaking goals ahead. In a rare insight into the mind of an exceptional solo sailor, he describes the emotional pressure involved in an extraordinary quest.
If you watch just one feature in this show, this is it.

52 SuperSeries preview
The winter months have also provided a chance for the 52 SuperSeries teams to re-group, tweak, fiddle and fettle in preparation for the new 2019 season. Some have gone even further and built a new boat for a new team based on the runaway success of last year’s winner, Quantum.
In advance of the opening event ten TP52 teams took part in the Palma Vela event to tune up providing us a chance to take an early look at what’s in store for this year’s 52 SuperSeries

SailGP in San Francisco
Round 2 of SailGP headed to San Francisco where the venue’s reputation for breeze and tricky tactical calls bore fruit before the racing even got underway. And when it did, the six teams put on a display of close, fast racing.