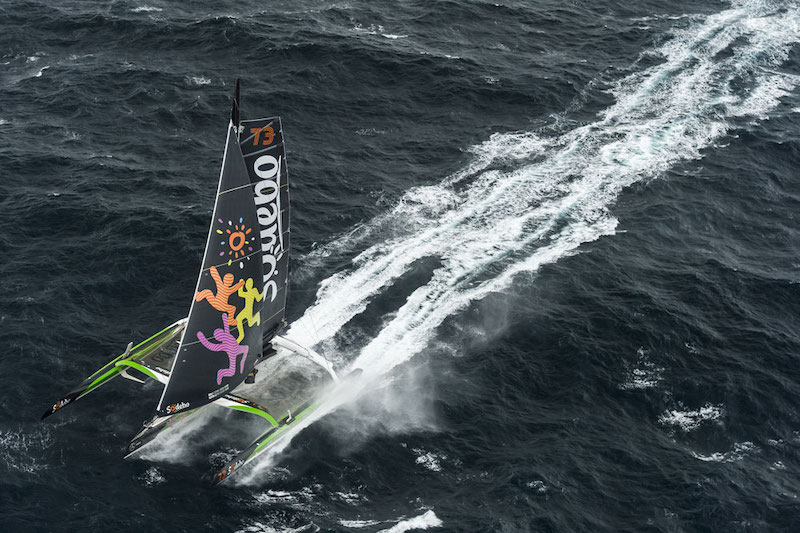 Despite having been slowed more than they had hoped by the light winds of the Doldrums, five days into their Jules Verne Trophy around the world record attempt the crew of Thomas Coville’s Sodebo Ultim 3 will cross the equator today on par with the 2017 pace of the record holders – Francis Joyon’s crew on IDEC Sport.

Yesterday the unstable, unpredictable winds of the Doldrums equatorial zone meant the Sodebo crew had their slowest day since starting the record attempt in the early hours of Wednesday morning. They picked up speed overnight, however, and should cross the equator during the day today hopefully with a small lead on the IDEC Sport 2017 time.

While that keeps their hopes of a record circumnavigation alive at this point, the crew were hoping to be further ahead of Joyon’s record run at this stage.

“It was complicated,” said crew member Thomas Rouxel. “When we expected to touch the southern trade winds to advance towards Brazil, we found ourselves with very little wind in the middle, tacking; We did I don’t know how many tacks with squalls, it was hell, we lost a lot of time.”

Finally though, the expected south easterly wind gradually returned and since midnight on Sunday the Sodebo Ultim 3 has been averaging over 20 knots of boat speed.

And while they have spent a little more time than they wanted to in the Doldrums, Rouxel says the crew managed to use the torrential rain showers to clean the boat and their bodies after five and half days of intense racing.

“We had a pretty overcast day with really very impressive high clouds and a lot of rain, but it allowed us to clean the boat and the men, it was nice!” he said, adding with a big smile: “Once in the southern hemisphere, we will have the right to a few super pleasant days of skiing along Brazil; the sailing conditions will be pretty cool.”