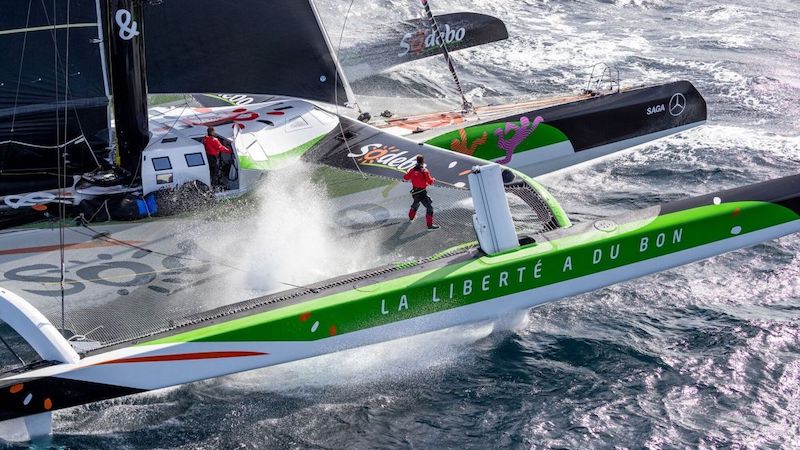 French skipper Thomas Coville and the crew of the Sodebo Ultim 3 have been forced to abandon their Jules Verne Trophy around-the-world record attempt after being unable to fully repair damage to the foiling trimaran’s starboard rudder.

Coville and his crew had been at sea for 16 days and were setting a blistering pace on their record circumnavigation attempt when they began to experience problems steering the boat correctly. Soon after, a routine check revealed damage to the starboard rudder.

Despite consultations with the team’s shore support operation back in Lorient, France it eventually became clear that a full repair at sea was not going to be possible. At this point the crew was deep in the Southern Ocean having passed the Kergulen Islands earlier in the week. With the vast empty expanse of the Pacific Ocean stretching ahead of them, there would be few viable rescue options should the boat become further incapacitated, and this is what prompted Coville’s decision to stop the record attempt.

“The problem was more serious than initially thought,” Coville explained. “It was no longer possible to steer the boat with the same ambitions [for the record attempt] and above all the same safety.”

Coville’s words to his disappointed crew as he broke the news that their record attempt was over were typically pragmatic:

“It’s super hard to tell you that [news] but it’s also my job to bring you back and bring the boat back to its owner. We are not “out”, we did a great thing until Kerguelen, we were ahead, I do not think we should tempt the devil with a boat that is not 100 per cent.”

The French trimaran is now en route to Reunion Island where it is expected to arrive at the end of next week. They will be met there by members of the Sodebo technical team with specialist parts to effect repairs. Once the boat is back to full strength the crew will set off back the way they came with the aim of being in Lorient by mid-January.

Disappointingly this breakdown means the end of the Sodebo team’s Jules Verne Trophy aspirations for this season as the boat will need a full overhaul to return it to race mode.

“The boat will have done more than a round the world [passage] in number of miles, so it needs to be overhauled, inspected in every way,” said Sodebo team manager Jean-Christophe Moussard. “But we will take advantage of the return to continue working on the knowledge and performance of this young boat launched in March 2019,” Moussard concluded.