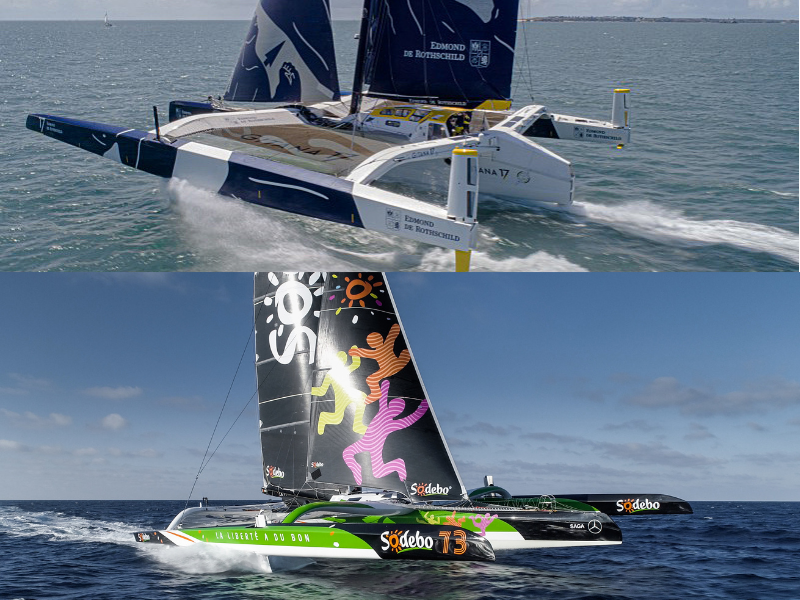 Two major French professional sailing teams have set off around the world overnight aboard 100-foot Ultim multihulls in separate attempts to win the Jules Verne Trophy for the fastest nonstop lap of the planet.

With the global weather picture morphing into an optimum scenario for a tilt at beating the current record time of 40 days, 23 hours, 30 minutes, 30 seconds – set by another French crew led by Francis Joyon aboard the giant IDEC Sport trimaran – both the Sodebo and Gitana Team crews left their bases in Lorient to head for the official start line at the western end of the English Channel between the Créac’h lighthouse on the French island of Ushant and the Lizard Light at the south west tip of England.

“We were expecting to set sail at any given moment,” said Caudrelier shortly before departure. “It’s the Jules Verne Trophy and our target is less about the start and more about the finish.

“It’s the pre-race periods which are more stressful; the stress itself diminishes and then disappears once you’ve got down to the action. In our minds, we’ve already been prepared for a little while.

“This record is different to a race as we’ll kind of be doing battle against a ghost ship, even though there is another boat out on the water which we’ll be watching and monitoring.

“We know that we have an exceptional boat. If we have good weather, with a bit of luck we can secure a great time. This boat is really quick.”

Meanwhile, Cammas had this to say:

“Completing this round the world is already a fine challenge in itself. Obviously, we’re hoping to beat the record and that’s why we’re setting sail. However, nothing could be less certain when you’re on the departure dock.

“What we’re hunting down in the South Atlantic is still shifting. We’re not sure that leaving on Thursday would be better than leaving now. We said to ourselves that it was risky to set sail before our rival in what is effectively an average weather window, and it’s less risky to set off behind them in an average window.

“It’s still an average window, but during my previous record, in 2010 with Groupama 3, we set sail with a very poor window and we ended up beating the record. Naturally, the ideal scenario would have involved the perfect window, but maybe that doesn’t exist for this winter.

“So, we’re already trying our luck this evening and we’ll see what happens…”

On board with Cammas and Caudrelier are French sailors: Morgan Lagravière, Erwan Israël, Yann Riou (media man), and David Boileau.

The crew made a strong start to their global record attempt in the early hours of this morning, crossing the start line at 0326 precisely flying a J3 headsail and a full mainsail in 18 knots of north westerly wind with three-metre waves.

To set a new record the two teams will need to be back by the early hours of January 5, 2021.