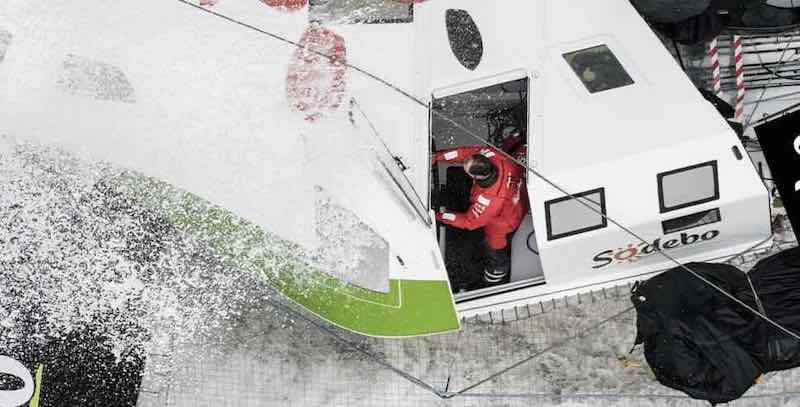 Thomas Coville’s crew aboard the Sodebo Ultim maxi-multihull have made a spectacular high-speed entrance to the Indian Ocean leg of their Jules Verne Trophy around-the-world record attempt.

Watching and listening to the latest video sent back from the boat by media man Martin Keruzoré you really don’t need to see the speed readout displays to get a feel for just how fast the flying trimaran is travelling – the constant screaming of the foils and the water hurtling past the windows is indication enough.

But for the data-driven readers amongst you, tonight at 1900 UTC the boat was averaging 30 knots of boat speed in just 23 knots of breeze.

Earlier in the day Coville’s men passed the Cape of Good Hope with around a 17-and-a-half-hour advantage over the time of the record holders Francis Joyon’s crew aboard the IDEC Sport maxi trimaran in 2017.

However Coville and co. know all too well that the IDEC sailors had an exceptional run through across the Indian Ocean in near perfect conditions for setting records. That’s a scenario that Coville’s crew are not expecting to repeat itself.

In fact the Cape of Good Hope was until today a potential cut-off point for the Sodebo Jules Verne Trophy attempt should the weather prospects have made a record run impossible. Happily for the crew and those of us ashore tracking their progress with interest the collective decision of Coville and his weather team Jean-Luc Nélias and Philippe Legros was to press on.

“It’s going to be more complicated than for Idec which went straight [all the way] to New Zealand,” Coville said. “We are going to have more tailwinds and when we arrive near Cape Leeuwin [Australia], there is a complex weather situation, with either light or very bad weather, but it can also go very well.

Coville added that he expected to drop behind Joyon’s pace at some point in the Southern Ocean but hoped to be on par again by New Zealand, giving them “a chance to attack the Pacific with a chance of seizing the record.”

In the coming days the threat of ice will be front of mind for the Sodebo sailors as they carve their path around the bottom of the world. Back in France at the Sodebo team base the weather routers are working with specialist company CLS to identify any ice threats.

“Unlike the Vendee Globe, where an ice limit is imposed on all competitors, nothing constrains us, except the safety of the boat and especially the crew,” explained Nélias. “We have to take a little risk because the shortest route goes closer to the ice, it is a particular mix to find. As the smallest object detectable by satellite images measures 20 metres, we are also relying on statistics and our expertise.”

Although the weather on route will be constantly changing the tick of the record clock will doubtless grow louder and louder on board, as with 8,614 nautical miles (nm) of their around the world lap behind them and a further 15,248 still to go the Sodebo crew fight to make it back to France by 1425 on January 5, 2021.