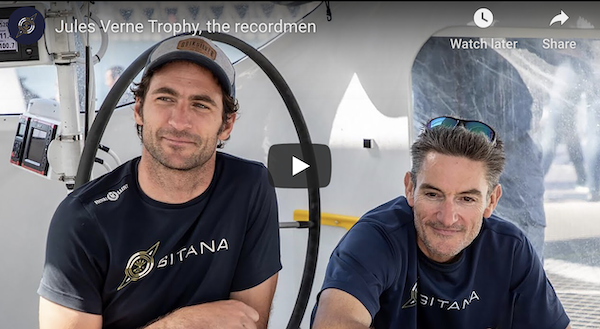 On November 1, 2020 the crew of the Maxi Edmond de Rothschild Ultim trimaran will officially begin its weather stand-by to set off on attempt to win the Jules Verne Trophy by setting a new non-stop around-the-world sailing record.

Launched in 2017 the Maxi Edmond de Rothschild multihull it is the first offshore racing maxi-trimaran designed to fly on foils on the open ocean. This winter its two skippers Franck Cammas and Charles Caudrelier are hoping to complete a round-the-world passage in flying mode.

There will be six crew aboard the gigantic 32-metre Ultim trimaran working in shifts day and night to try to beat the record of 40 days 23 hours and 30 minutes set by Francis Joyon’s IDEC Sport crew in 2017.

Among the Maxi Edmond de Rothschild crew will be French sailors Morgan Lagravière and David Boileau.

Lagravière is known and recognised for his excellence as a helmsman and his inherent instinctive feel for making a boat go fast, while Boileau – an outstanding sailor and technician and the trimaran’s boat captain – has been one of the pillars of the Gitana Team for more than ten years.

Although having very different backgrounds the two sailors have things in common: they are passionate about everything that flies. The pair will be on watch together as they take on their first around the world challenge for the Jules Verne Trophy.