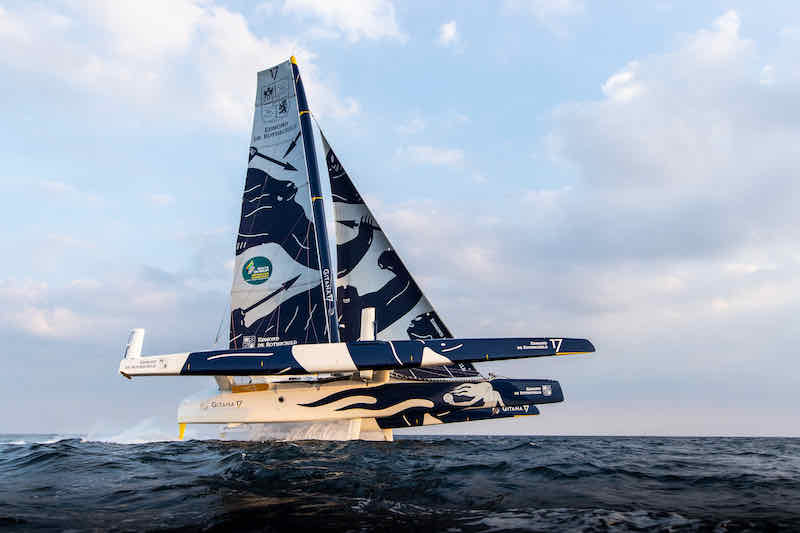 Franck Cammas and Charles Caudrelier’s hand-picked crew on the French Gitana Team Ultim multihull Maxi Edmond de Rothschild could leave Lorient, France tomorrow (Saturday January 9) for a second tilt at the Jules Verne Trophy for the fastest circumnavigation of the planet by a sailing yacht.

The team has been on high alert this week after team meteorologist Marcel van Triest spotted a favourable weather scenario developing. If/when van Triest gives the final green light to begin the around the world record attempt, the crew will leave Lorient to sail to the official start line off Brest in northern France, with a view of starting on Saturday night/Sunday morning.

“According to our latest forecasts we’ll likely set sail with a 15-20-knot north easterly wind in the area in question on very manageable sea,” Caudrelier explained. “The wind is set to fill out to 25-30 knots as we approach Cape Finisterre and the descent along the length of the Iberian Peninsula will be bracing. However, the advantage of a north easterly breeze is that we’ll have good seas.

“There’s a low-pressure system at Cape St Vincent which we’ll be hunting down before gybing towards the Azores High. Below the zone of high pressure, we’ll have to put in another gybe before setting a course for the equator.”

Although the weather scenario looks good at this stage the descent towards the southern hemisphere will be far from restful as the timing will be painfully tight.

“With this weather window we’re aiming for a sub-five-day time to the equator and a sub-12-day time to Cape Agulhas,” Caudrelier said. “If we were solely aiming to break the record to the equator, our departure timing is not the best, but it’s a compromise to ensure we have the best possible window in the Atlantic as a whole.

“For now, the latter seems quite favourable with a route that isn’t too extreme in the south, but we’ll have to adjust our trajectory again during our descent as that’s still a long way off and there’s time for things to evolve before then.”