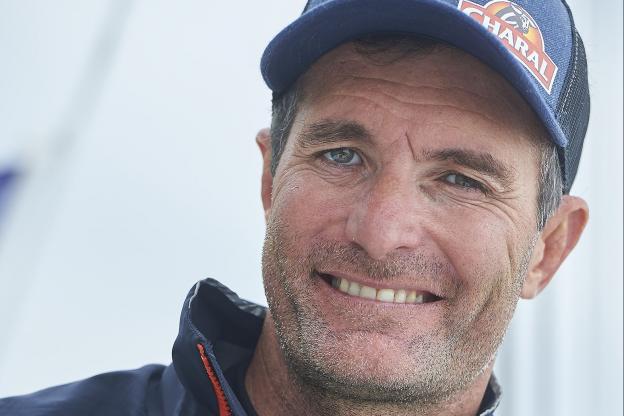 Having won the last Volvo Ocean Race as part of the Dongfeng Race Team crew and finished third in the last Vendee Globe, French skipper Jérémie Beyou is good person to quiz about the suitability of a new generation of IMOCA 60 boats in the next VOR.

Speaking to members of the Volvo Ocean Race communications team at his home base in Lorient – where he had recently launched his latest IMOCA 60 Charal – Beyou said that Volvo Ocean Race crews would need to learn a new set of skills to manage the faster and potential more vulnerable fully crewed IMOCA 60.

“These boats are quite different compared to the Volvo Ocean 65,” Beyou said.

“It’s a different way of sailing and I think you sail more like you’re on a multihull compared to a mono. You have to be able to manage it – you don’t have to push hard all the time, you have to take care of the boat and watch the data and loads on the boat.

“Those of us who sail in the IMOCA class regularly understand this, so maybe we can do the next [Volvo Ocean] Race as a crew. After developing these boats, we know the rules very well, so I can imagine collaboration between teams who are already sailing in this class ahead of the next Race.”

Beyou said he believed a crew of five for the fully-crewed IMOCA 60 would be the right number, but cautioned that the reduced numbers meant each of the individual sailors would need to be multi-talented with no room for specialists roles like navigator or strategist.

“It’s so difficult to sail the boat alone,” Beyou explained. “Having five people on board means you can push the boat to its limits and focus 100 per cent on performance all the time – which you can’t really do on your own.”

“But it also means when you’re sailing five rather than nine or 10 in a usual Volvo Ocean Race boat, all the sailors onboard must be multi-skilled. It’s key that the same person can be a trimmer, a driver, a bowman, and be able to do the strategy.

“So it’s like sailing with five solo sailors onboard rather than a traditional crew.”

Beyou’s new boat is the first of the new generation IMOCA 60s built for the next Vendee Globe. Its striking looks and gigantic foils make it a real head-turner on the shore and on the water it has already proved itself capable of remarkable turns of speed.

Although he said it would be straightforward enough to modify the interior for five people rather than one, Beyou thought it unlikely though that a boat like his would generally suit a fully-crewed race featuring as much upwind racing as the last Volvo Ocean Race.

“After that, the big difference will be on the hull design and the foil design, depending on the course of the race. If it’s the same stopovers as in 2017-18, then you have a lot of time upwind, a lot of light wind spots.

“Charal is a boat designed for the Vendée Globe, which is broad reaching and downwind in strong winds only, so it’s not currently an ideal design for the next Race.”