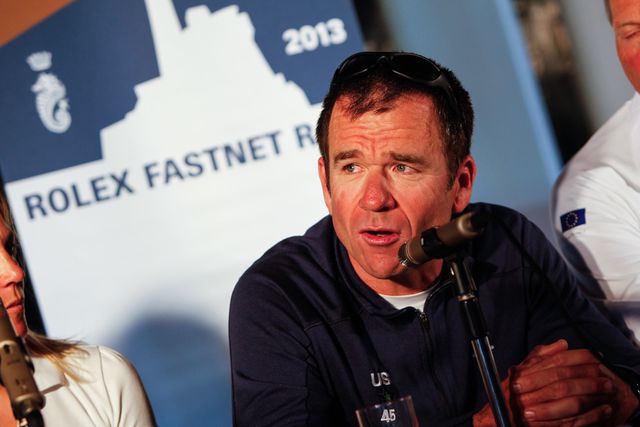 As CEO of the powerhouse sailmaking brand Doyle Sails Kiwi sailor Mike Sanderson gets involved in just about every area of the fast-evolving professional yacht racing world. From the 52 Super Series and Maxi 72s, through the new generation IMOCA 60s, and up to the heady heights of the America’s Cup, Sanderson has a seat at the table.

The back end of a busy northern hemisphere summer has seen Sanderson, test-sailing in the Solent aboard Alex Thompson’s IMOCA 60 Hugo Boss, competing at Porto Cervo in the Rolex Maxi 72 Worlds and jetting to Newport, Rhode Island for the commissioning of John ‘Hap’ Fauth’s Maxi 72, Bella Mente.

As CEO of Doyle Sails International, Sanderson is revelling in the variety and challenge of working with major sailing programmes of this type. Also in the mix are America’s Cup and round the world campaigns, as the successor to the Volvo Ocean Race continues to take shape.

Sanderson’s CV includes two-time Volvo Ocean Race winner, four-time America’s Cup competitor, bronze medallist in the solo transatlantic Open 60 class and ISAF World Sailor of the Year, enabling him to bring a wealth of expertise and knowledge to these programmes.

After his successes in the Volvo Ocean Race, Sanderson took to the corporate speaking circuit, talking about his campaign experiences and how they might apply to business. It was about setting clear goals, getting the best possible people, using their collective expertise to find pathways to success and then working within timeframe and budget to achieve it.

Now he finds himself following his own advice and applying all of those lessons as a model for Doyle Sails International, which was established as a new company last year. ‘We are treating the business in exactly the same way we would put together a major sailing campaign.’

A key part of the company’s philosophy stems from the typically lean Kiwi race programmes that have achieved success against rivals with much bigger budgets. ‘It is about driving hard to deliver maximum value for every dollar spent – bang for the buck. That is very important.’

He is often asked if he misses the intensity and single-minded competitive focus of total immersion in an America’s Cup, or ocean race team. ‘I have a wonderful challenge on my hands with Doyle,’ he responds. ‘I am working with a great bunch of people. I enjoy dealing with our customers and the management side and I still get to go racing.’

Exciting, is a word that comes up frequently in his conversation, in references to both yacht racing and managing a business with 54 sail lofts worldwide serving a demanding market of grand prix racers, high-performance cruisers and superyachts. ‘The business challenge can be complex and the goal posts can shift. It is never dull.’

Part of the mission in this summer’s northern hemisphere tour has been for Sanderson to visit key lofts in the group. ‘I really needed to spend some time with the overseas lofts and entrench myself in Europe and the East Coast of the US.’

Since taking over as CEO, Sanderson has stepped up the recruitment of top sailors into the Doyle team at the New Zealand HQ and in lofts spread around the world. Recent signings include Max Sirena and Francesco Bruni (Doyle Italy), Chris Sherlock and Luke Molloy (Doyle Palma), Chris Nicholson (Doyle Lake Macquarie), Tony Rey (Doyle Salem), joining the likes of Stu Bannatyne, Justin Ferris, Jez Fanstone and Sanderson in New Zealand.

Add in director Richard Bouzaid, who was a founding partner in the New Zealand loft with Chris MacMaster, and the core group represents an extraordinary repository of campaign experience at the highest level: 20 America’s Cups, 31 Whitbread/Volvo Ocean Races, 11 Olympic campaigns, along with assorted world and national championships, Fastnets, Sydney- Hobarts, Transpacs and the like.

With similar talent in the group’s other lofts around the world, this pool of experience is a powerful asset. ‘It is a big deal,’ Sanderson concurs. ‘We are hiring good people in the same way we would recruit the best people for a sailing campaign. I have always believed fast people make fast boats. The good ideas come from good guys.

‘When some of these people came on board, they cautioned me that they were not salesmen. That is exactly why I was talking to them. Much more important than sales experience, they had hands-on experience. They know what you need to win campaigns, about managing budgets, about building sails that will last the course and be race-fast for a long time. I don’t want them to be salesmen. I want them to be experts.

‘They are able to give advice across the whole campaign programme and in some cases mentor less experienced people who want to get into offshore racing. They have been there at the highest level and can give really good advice.

‘The ability of these sails to perform with less sag and lower luff tension is going to be a game changer’, he predicts, adding that ‘performance benefits may actually prove greatest in a class like the IMOCA’s where the use of a one design mast means there are precise limits on the amount of rig compression which the sailmaker must design around if the maximum potential of each boat is to be extracted’

‘Lewis Hamilton is not a salesman, he is a Formula One champion, but if I was to go and buy a Mercedes Benz and he was there to give me advice on how to get the best out of it, I would definitely be listening. There would be nothing more comforting.’

Sanderson’s mentoring role at the 2018 Maxi 72 World Championship was a case in point. He sailed with a new owner putting together a new programme.

‘We knew we would struggle, but it was great racing and a good learning experience. Now they face a tough choice of whether to step it up to really compete, or whether they are content to enjoy the racing and being part of the whole experience. It is not for the faint-hearted.’

While he was guiding new people through their first experience at this level, he was also able to watch some of the big guns utilising Doyle’s cable-less code zeros to good effect. ‘There has been a great deal of development with these sails. We are now on about version 10 and they are still evolving.

‘Exciting doors are opening up with this technology extending to jibs. Momo and Proteus were both using our cable-less genoa staysails as well as code zeros. The ability of these sails to perform with less sag and lower luff tension is going to be a game-changer.’

In the Maxi 72 class, where the boats can withstand huge rig loads, the advantages are less pronounced, but switching to the IMOCA 60s, for example, where the rule restricts compression on the deck-stepped masts, the performance gains are much more significant.

Sailing Hugo Boss upwind in nine knots of breeze on the Solent illustrated the point. Flying a cableless code zero from the masthead with the boat fully canted and fully ballasted, from Alex Thompson’s vantage point on the windward helm station, the luff of the sail remained fully visible all the way up the rig, whereas a conventional sail sagged away until the luff completely disappeared from view.

‘Now we can extend that to jibs as well, so you could have situations where these IMOCA 60s could be carrying three or four cable-less jibs ahead of the mast. You are saving weight, you are reducing mast compression, they are easier to handle, but most importantly they are flying with considerably less sag in the luffs. We are talking big percentages.

‘If you end up with a situation where you can get these sails operating in much wider wind ranges and apparent wind angles, you are making very significant gains just in terms of the rotation of driving force in the direction you are heading.’

With the IMOCA 60s about to serve double duty as both solo round the world racers and crewed boats in the Volvo Ocean Race’s successor, Sanderson sees a huge area of development in these sails opening up. ‘We are barely scratching the surface at the moment. With the direction the America’s Cup is taking, we could also see applications there.’

Bringing the IMOCA 60s into the Volvo Ocean Race matrix is a big step forward in Sanderson’s view, not least because it will bring back an element of intrigue and strategic sailing missing from the recent era.

He fully understands the necessity of the Volvo Ocean 65 concept in the post global financial crisis world, but says virtually bulletproof one-design yachts with exactly the same sail inventories reduced strategic options and eliminated the strengths-andweaknesses battle of different designs pitted against each other.

Sailing Hugo Boss at more than 30 knots in the Solent reacquainted Sanderson with the extraordinary power of these boats.

‘They are tremendous. You just had to go, “Wow, this thing is really shifting!” Yet it did not feel loaded or dangerous. It was fully controlled. I think bringing them into the Volvo scenario is going to be very cool.’

However, these are not boats that can just be set at full throttle all the time. ‘There are definitely going to be times when you have to nurse them and times when you can take full advantage of the conditions and hammer them. Those decisions are going to be very strategic and particular to each boat, so I think it will make the racing more interesting.’

If cable-less headsails are causing excitement forward of the mast – ‘I think they are possibly the biggest thing we have seen in sail design for some years,’ says Sanderson – what about behind the mast? Are the double-membrane mainsails being ushered in by the 36th America’s Cup the next big thing?

The Bella Mente campaign is one half of the New York Yacht Club’s American Magic Cup programme, along with Doug DeVos’s Quantum Racing team. Both have a close association with Quantum Sails, but there is also a continuing collaboration with Doyle.

‘As sailmakers, we are definitely excited about sails playing a bigger role in this America’s Cup. Knowing what we can achieve from a Stratis membrane standpoint and the effort going into dynamic structures, I am confident we are going to see a significant step forward.

‘At the America’s Cup you get such an amazing level of attention and brain matter working on every problem. They know what they want to achieve and they will be thinking 24/7 on how to get there.

‘It will be interesting to see how uncomplicated the final solution is, because that will definitely affect its trickle-down value and whether it gets to become mainstream.’

As he winds up his northern hemisphere tour, Sanderson is quietly confident moving forward. ‘People are making comments that we are doing well against the competition, but to be honest at this stage we are not really thinking about the competition.

‘When establishing a major sailing campaign, I always believed it was not worth lining up against others until your house was in order. That is the phase we are in now. We are focused on ourselves and doing things how we want to do them and getting the people involved that we want to be part of our organisation. We are enjoying that building process. It is fun times.

‘There is no point in us chasing the big guns down their commercial model. We want to be a bespoke sailmaker building custom products for our clients. I use the analogy that you can’t afford to make Fiats in Italy any longer but you can still build Ferraris. We want to build our sails that way. Our mantra is that we are sailors who are sailmakers.’ 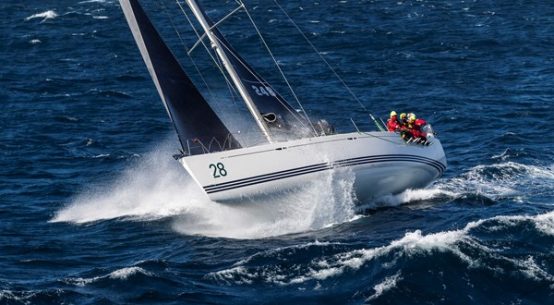 Sydney to Hobart – Between the fires 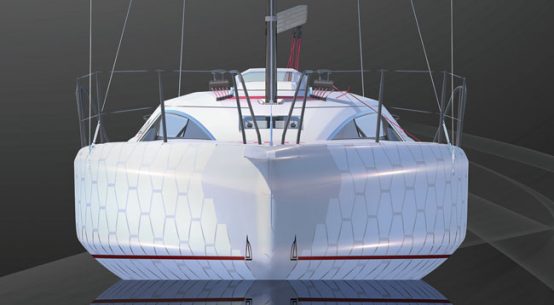 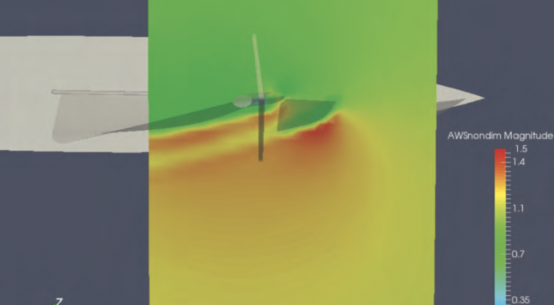 Future Fibres: Don’t shake it all about