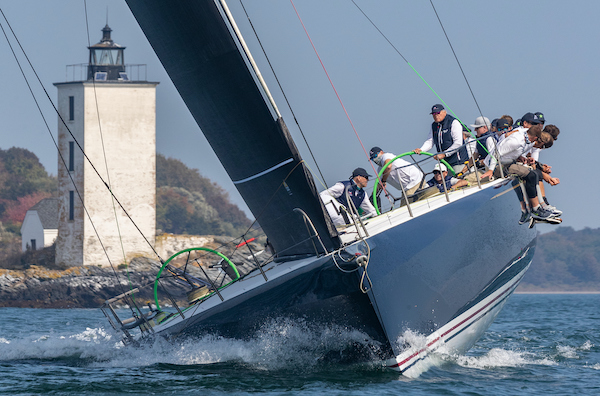 A pre-season update from Andrew McIrvine – secretary general of the International Maxi Association.

The world of sailing, not to mention the world as a whole, is in for a massive reset as we look with increasing hope at the end of this pandemic. Not to lapse into hyperbole, while the predictions for control of the virus vary there is now a level of certainty that a corner has been turned for all of us.

Much closer to ‘home’, as long as enough vaccination is accepted and the logistics of administration can be overcome, we are looking fairly confident about embarking on a European sailing programme for the Maxi fleet – almost back to normal. Not surprisingly, the confidence to travel for the early season in the Caribbean has not been there and although most of the regattas plan to proceed we know that fewer boats than usual will travel to the region.

As I write this in the UK we are into the third day as the first Western country to start a mass vaccination programme. This will not be an instant fix but by April should be making a big difference. Other countries will soon follow. Already case numbers and deaths seem to be coming down after the second peak. Different countries have had different rules and different restrictions but the virus has found its way round most of them; countries that had done well in the first wave such as Germany do not look so good this time around.

More optimistically, back in the Mediterranean the first event for Maxis as usual should be Palma Vela followed by Rolex Capri Sailing Week which will again incorporate the Tre Golfi offshore race.

I suspect that international travel to and from the US, and even more so from the Antipodes, will remain a problem. Hit hardest by these restrictions have been the regular professional sailing crews used to frequenting regattas widely spaced around the planet.

The Maxi yachts that race nearly all rely on these people who have had little or no work for the whole of 2020. There was just the one event in Cape Town in the 52 Super Series before the first lockdown. Then the only Maxi event out of all the IMA series that went ahead was Les Voiles de Saint Tropez. We got to within two days of the start of the Maxi Yacht Rolex Cup when a sudden outbreak of Covid among yacht club staff and guests caused a last-minute cancellation.

Where do we go from here and what can we expect? A lot will depend on the economic hit as well as control of the infection. After the last financial crisis many owners mothballed their boats. They were trying to save their businesses and also felt it did not look good to be seen away enjoying time on their yachts while laying off staff and shutting factories.

Therefore we will still have a number of problems to overcome to get back to anything approaching normality. They are separate but interlinked: control of infection, freeing up international travel and economic recovery.

There is no doubt that planning racing for disparate fleets of boats is fraught with difficulty, hence the long history of various rating rules that just as they seem to be gaining traction suddenly lose favour. Unfortunately our own fleet had evolved into a really complex set of divisions, classes and categories where few had either the time or inclination to fully understand the distinctions. But we have been trying to simplify this over the last couple of years.

Our fundamental philosophy is to try to provide the best racing. This means putting boats together with similar performance, regardless of size or design focus. That is why we have discarded the terms racer, racer-cruiser and cruiser. When they were in play large grey areas appeared as the difference between a racer-cruiser and a cruiser might come down to whether the mast being exposed below deck through the owner’s private facilities was acceptable in a supposed luxury yacht.

Our performance formula, now working over two seasons, has had further tweaks and we look forward to testing it further this year. Our other initiative which in 2020 suddenly became much more relevant was crew limitation.

This was introduced on the basis of cost reduction and convenience for owners. With powered systems, roller furlers, snuffers and so on, the requirements for huge crews has been reduced, often quite dramatically. The IRC rating designates a maximum crew number mainly related to hull length. With the help of the IRC rating office we calculated special time allowances for crew reductions to 66 per cent and last year, in view of the need for crew social distancing, down to 50 per cent. For the obvious reason sadly we were unable to test this as much as we would have liked.

Falling under brilliant ideas that failed for no single apparent reason, it seems that the Maxi72 class will not continue. Near-perfectly optimised racing boats but even with few restrictions the temptation to optimise even further meant some boats moved out of class, leaving too few for class racing. These magnificent yachts will of course continue to race in regattas all over the world as they do well under all rating systems, particularly offshore.

Meanwhile, I have every hope that the new ClubSwan 80 may continue the success seen with the same brand’s 50 and 36ft versions. It will depend on whether owners of this size of boat are willing to be subject to strict one-design rules; also will these fairly extreme-looking machines be suitable for owner-drivers? The same was said about the ClubSwan 36 but from personal experience this is an extraordinarily well-balanced easy-to-sail boat – and very fast. Let us hope that is the case for the 80ft incarnation as well.

Finally, a word about foiling. As we watch the current Vendée Globe with a large percentage of the new foiling boats already knocked out, one wonders how much this technology can work with Maxis. Those policing rating rules have enough trouble coping with the difference between planing and non-planing boats, then the next step up, how to rate canting keels.

Foils, just in their huge variety, present the boffins with an even greater problem. Should we try to rate them so that they can race with ‘normal’ boats or should they be kept separate? One thing is for sure: this technology is still developing fast and is not going away. Unless we just accept that we cannot rate or race them with normal monohulls?

So far even on smaller boats foils have proved fragile and tough to manage. The difficult-to-quantify shock-loads from coming off the foils probably also account for some recent rig and hull damage. One hears there are at least two Maxis with a design/build slot booked – so we had better start thinking fast.

Fingers crossed, touching wood (iron for the Italians), we will soon be sailing again.