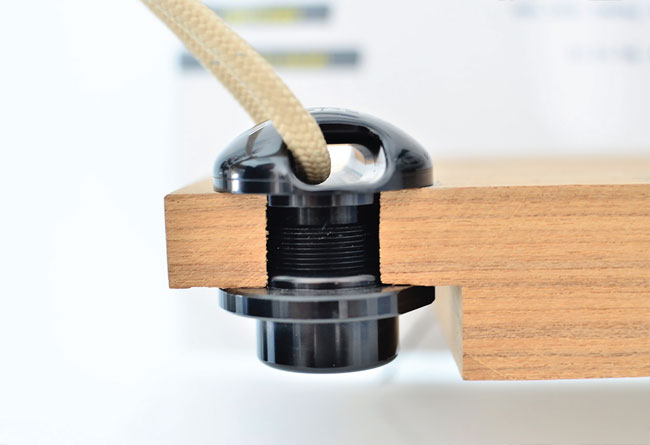 When a young Brittany company claims a Vendée Globe victory within three years of being formed… well that is actually something to make a fuss about.

‘For Us, By Us’ could easily have been the tagline that Julien Barnet – a professional sailor and rigger – and Thibault Reinhart – pro sailor and certified naval engineer – came up with when, in 2013, the two Frenchmen formed their new company Ino-Rope.

The pair first met in an Italian boatyard while working on separate Mini Transat 650 projects and quickly became firm friends. They launched Ino-Rope to satisfy an unfulfilled demand among the offshore racing community for light, strong and reliable turning blocks and shackles.

Over the next year the duo came up with an innovative solution using high-tech textile fibres to produce the first block using a rope – rather than ball-bearing – axle. It took two years of painstaking testing and product development before they went into production with blocks in a range of sizes, but since then Ino-Rope has continued on an arc of logical and well-considered product releases.

Along the way the company has gained approval for its products from the top names in ocean racing, such as the hallowed Banque Populaire syndicate who put them to the ultimate test in the Vendée Globe solo around the world race, along with 12 boats which used Ino-Rope products and blocks during the Vendée 2016. Their products were also on IDEC the last winner of the Route du Rhum.

But far from producing custom-made products restricted to yacht racing’s elite, Ino-Rope has instead established an impressive chandlery range – meaning the company’s smartly thought out product line is available to anyone.

Based on an innovative patented concept the construction of the blocks is simple – comprising just five components – and yet supremely efficient. The use of textile technology means Ino-Block comes in noticeably lighter than rival ball-bearing-based products, while its reliability comes from the super-strong and resilient Dyneema used for the axle.

Similarly, Ino-Rope’s cleverly conceived Ino-Connect range of Dyneema shackles and loops can handle a wide range of working loads, while being supremely light and corrosion resistant.

On the back of its chandlery range, the now 15-person-strong company (60 per cent of whom are involved in research and development) based in Concarneau, Brittany, also uses its skills and expertise to supply both standard and customised rigging and ropework solutions to major boatbuilders and shipyards.

And it is out of the understanding of the needs of that client sector that the ideas for Ino-Rope’s two latest products were born. Both are a departure from blocks and shackles, but as Reinhart explains, the company’s new padeye solutions – one through-hull and the other adhesive – are logical product progressions, backed by qualified client demand.

‘Our Ino-Padeye and the recently launched Stick-on Ino-Padeye are both the result of us listening to the needs of our shipyard clients and working to come up with innovative, light, strong and durable solutions,’ Reinhart said.

‘The Ino-Padeye is a through-deck solution designed to be used with modern textile lashings, soft shackles and loops. It’s an elegant, low-profile fitting made from high-grade hard anodised aluminium that is easy and quick to install on most decks without structural improvement, only one hole to drill, no screw length adjustment.’

Designed in collaboration with VMG Yacht Design in Switzerland, the Ino-Padeye range includes three sizes catering for maximum working loads from 800 to 3,000kg, making it perfect – among other applications – for mast step halyard blocks, spinnaker sheet blocks, runners and turning blocks, as well as fixing points for textile standing rigging, or for multihull trampolines.

Meanwhile, the uniquely-shaped triangular stick-on Ino-Padeye is a quick and easy, reliable attachment point for low-load applications – on or below deck.

Available in three sizes and with a choice of either fibreglass or carbon construction, Stick-on Ino-Padeye is fast and simple to install and when bonded with Sikaflex 292i the pads have a breaking load of 150kg.

‘That makes them perfect as a vertical fixing point for anything you want to hang inside the boat,’ Reinhart said. ‘But we believe the bonding surface is good enough to use on deck for rope loads generated by hand rather than by a winch.’