Skip to content
You are here
Home > Inshore Racing > Iain Murray: The “Big Fella” of the America’s Cup on SailGP 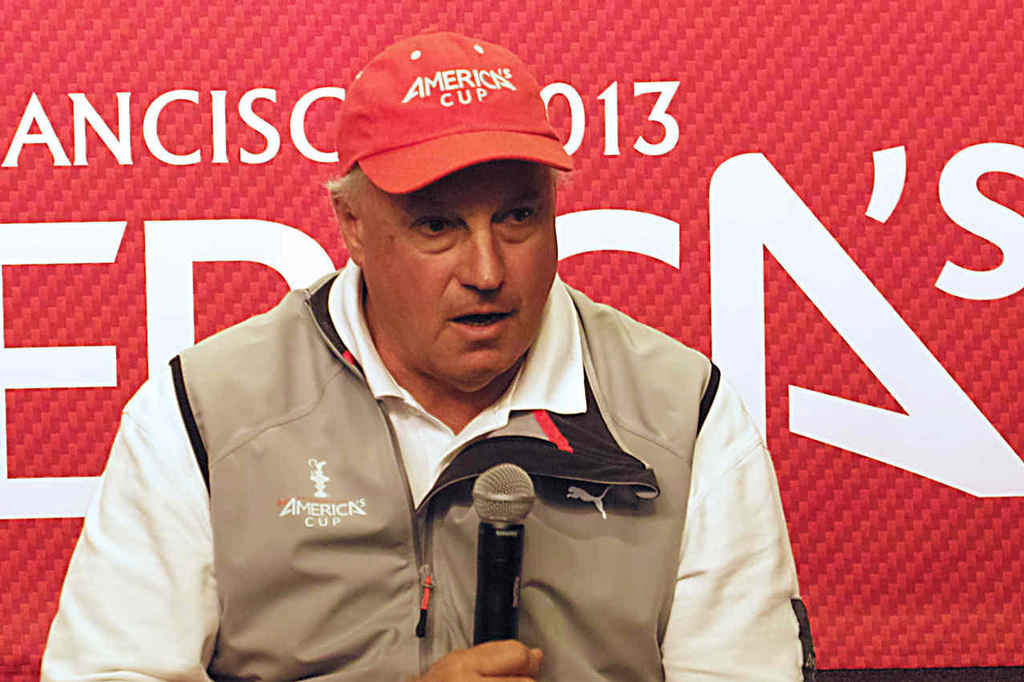 Rob Kothe speaks to multiple-America’s Cup race director Iain Murray about his role at SailGP at the end of the international circuit’s inaugural season.

One of Australia’s most respected sailor Iain Murray, 61, is the Regatta Director for SailGP.

He grappled with the narrow sailable wind range of the foiling 75-footers in San Francisco, but the AC50’s made for easier race management at the Bermuda regatta.

Post Bermuda Murray let it be known that he was keen to continue in the role if required. However, his decision to take on the Regatta Director role with SailGP has meant he has not been asked to continue with the Auckland America’s Cup.

His on-water management team was presented with a broad range of conditions in the first SailGP season. Fluky light winds on Sydney Harbour, the 22-knot clockwork on San Francisco Bay, the wild conditions in New York, where Team Great Britain was the first F 50 capsize in pre-first race practice.

Then the challenge of Cowes, where Team USA tipped over at the first bear away and the lighter than forecast conditions on the Mediterranean.

No stranger to high-speed racing, as skipper Murray won the 18 ft skiff unofficial world title, the JJ Giltinan International Trophy, for a record six consecutive years from 1977 to 1982. He designed the modern version of the 18-footers. He had a team manager/coach/designer relationship with the 18ft skiff Gotta Love It 7 campaign, winning several JJ Giltinan trophies.

He is Patron of the 18-footer Club.

In the 1983 America’s Cup challenge at Newport, Rhode Island, Murray sailed on Syd Fischer’s Advance. Australia II went on to win the Cup and brought it to Australia. Murray co-designed and skippered Kookaburra III which lost to Dennis Conner’s Stars & Stripes in Fremantle in 1987. Iain was onboard One Australia when it sank during the 1995 Louis Vuitton Cup, ahead of the America’s Cup 1995.
In 1984 he won the World Etchells championship and again in 2019.

As a designer Iain Murray, a 25-year Sydney Hobart veteran, has been pencilling the designs for much of the ongoing hull and appendage surgery for Australia’s top ocean racer, Wild Oats XI, on which he has sailed as tactician for many years. For all those years, the big framed Australian has been known as Big Fella.

He represented Australia in Sailing at the 2008 Summer Olympics in Beijing, raced the Olympic Star class keelboat. Losing 20kg for his Star campaign with Andrew’ Dog’ Palfrey, he briefly became Little Fella.

Since 2017 he has been the High-Performance manager of the Australian Olympic Sailing Team.

I caught up with the Big Fella in Marseille immediately after the US$ million-dollar match race. Murray was smiling as he stirred his first post-race coffee.

‘It was a bit testing today, that what the ocean does to you,’ he tells me.

‘Of course, today was quite stressful, but to see them race boats like that, at that level with that intensity is enjoyable, that is why everyone’s here.

‘The breeze, today in the designated racing area was erratic and then died out to the point that we could not race.

‘We had two choices, don’t race or move. As soon as it was clear there was breeze coming down between the mainland and the island, the management made the decision. Let’s take it on, it was an unproven area for us, with all the technology signals, radio frequencies etc. but it worked.

‘The important thing is that there was a good race for the big prize.

‘There was a 10-15-degree shift during the race. The breeze was still evolving, so it was not a perfect race course for us, it started OK, but it was not perfect at the end, but the winner was decided at the bottom mark, by a small thing not going quite right, and that’s all it takes.

‘The forecasting here in the Bay in Marseille has been pretty average. It’s a difficult place to forecast with land breezes, big hills behind us and unless you are running high-resolution models, that take in the topography, you are not going to get good forecasts.

‘No-one has invested in the big environmental assessment of Marseille South Harbour yet.

‘It’s good in a way, that the wind presents itself in quite a fluctuating form, it puts the test back on the sailors. Heads out of the boat, high-speed decisions in high-speed boats.

‘The 2024 Olympic venue is in the other Bay around the corner, more to where we were for the final SailGP match race. So, the sea wall won’t be used.

‘Since Bermuda, our race management software and our umpiring software have all evolved, and the rules are evolving too.

‘These foiling 50-foot catamarans are in their second generation, they’ve improved, you see the way they throw them around, and how they race them. They have all learnt from what the Kiwis brought to the last Cup, and it’s probably even moved on a little from there. That is the evolution of sailing, whether it’s F50’s, the AC boats or 470’s.

‘The range of 18,24 and 29-metre wing sails for the 2020 season will make it both easier and harder to race in a broader range of conditions, there are more decisions, but I think having more certainty about being able to race is a positive.

‘It’s a difficulty for sailing, and if you want to come to these sorts of close to the shore racing, you have to be able to do it.

‘The difficulty comes as venues like this, with forecasts of 30 knots, we would have had small sails today, and so there is an always a risk that you are putting the wrong size sail on. ‘

‘We have dealt with that for years with the 18 footers, and we will have to make well-informed decisions.
‘It will take us a while to work out the ranges of the various rigs, but as always winds are one thing, seas states are another.’

In the first event in the 2020 season, the seventh boat, currently being built in Auckland, will be sailed with its wing sail in its 24-metre configuration. All the boats will have 18, 24 and 29-metre wing sail modules for the second event, widely believed to be sailed in San Francisco.