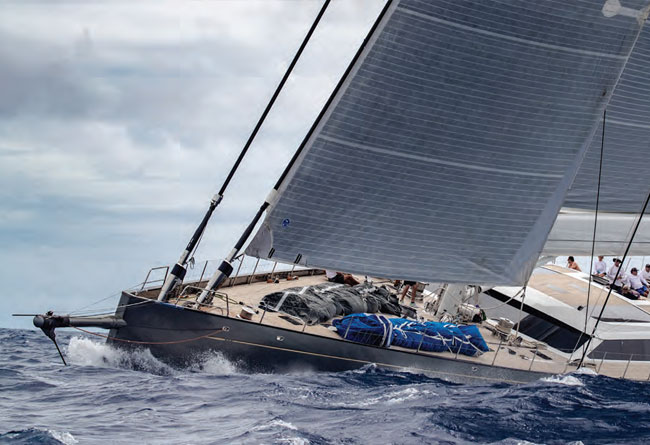 There is something immensely satisfying in taking the massive loads of a superyacht furling system and by exquisite engineering reducing the task of controlling those loads down to the touch of a button or joystick.

When you venture offshore in a high-performance superyacht with a Bermudian rig and a small crew, you are quite literally entrusting the safety of the vessel and the people on board to the reliability of the sail furling systems.

If they were to jam, malfunction or break when you need to shorten sail urgently in a rising wind, the consequences could be severe. It’s a shrewd investment to fit the very best, strongest and most reliable hardware that’s available, which is why so many large ocean-going yachts are rigged with Reckmann furling gear.

Baltic Yachts has forged an enviable reputation and is arguably the most innovative superyacht shipyard in recent years, with an amazing array of groundbreaking engineering solutions and game-changing technologies on every new custom build that leaves the yard.

The most recent of these, familiar to regular Seahorse readers, are the 112ft (34m) cruiser-racer Liara with her telescopic keel, advanced sail-trimming solutions, retractable propulsion and silent-running systems; and the mighty 142ft (43m) ocean cruiser Canova with her diesel-electric drivetrain, self-sustaining power generation capability under sail and the largest dynamic stability system (DSS) foil ever built.

The spectacular Pink Gin VI is even bigger at almost 177ft (53.9m) LOA and equally remarkable. Not only is she the largest carbon fibre sloop ever built, a host of other stand-out features won her the Superyacht Of The Year Award in 2018 against stiff competition such as the 60m (197ft) Perini Navi ketch Seven and the 58m (190ft) Royal Huisman sloop Ngoni.

Perhaps the most remarkable aspect of Pink Gin VI is the engineering and construction of the hull itself. The entire shell including the deck moulding weighs 18 tons, which is a tiny fraction – little more than seven per cent – of her overall (light ship) displacement of 250 tons. The hull is a Corecell foam sandwich with an outer skin of E-glass and aramid fibres, and an inner skin laminated in Gurit Sprint prepreg and regular prepreg carbon. A layer of woven Kevlar in the forefoot of the hull laminate increases its impact resistance.

The hull was built in three parts, in a three-piece female mould with a waterline split. This gave the build team easier access, allowed greater accuracy and reduced the overall build time. By scanning the three parts and creating 3D images the team was able to ensure that the huge hull fitted together with tolerances of less than a millimetre. To position the yacht’s centres of gravity and buoyancy as precisely as possible, the weight of each part of the hull had to be continuously monitored using eight sets of scales. Also, every component was checked for its own centre of gravity so that accurate weight distribution could be achieved.

The resulting hull is incredibly stiff – over its entire 53.9m length, it deflects through just 76mm when subjected to rig loads of 330 tons. This level of stiffness gives a significant boost to the yacht’s sailing performance and reduces the fluctuations in rig load under sail.

The stiffness of Pink Gin’s hull is even more impressive when you consider that her stand-out feature – large, hydraulically opening ‘balconies’ set into her topsides that fold down to create platforms just above the waterline on either side – need to become parts of the hull’s load-bearing structure when they’re shut, with enormously strong locking pins and hinges. Similar balconies have been fitted to large motor yachts but it’s unique to have them on a sailing yacht, whose hull has to support immense rig loads.

Another of Pink Gin’s remarkable features is the Force Feedback Steering System which, by using electric cylinders, eliminates the main drawback of the powerful hydraulics required to move such a large yacht’s rudder. Based on technology used in power steering systems for sports cars, the Force Feedback system accurately simulates the authentic helm ‘feel’ of a small thoroughbred yacht, monitoring loads and movement caused by side forces on the rudder and relaying them to the wheel, which makes helming far more rewarding and enables the helmsman to steer, trim and balance the yacht instinctively.

Pink Gin’s rig is remarkable in its own right. The 67.9m (228ft) carbon fibre mast – that’s 16m (52ft) taller than a J-Class – is from Rondal, with five sets of spreaders and a CL Solid carbon rigging package from Carbo- Link. It supports 1,322m2 of upwind sail area comprising a 755m2 mainsail, a 567m2 blade jib and a 365m2 working jib. Sailing upwind, Pink Gin’s reefing systems come into play when the true wind speed reaches 16 knots.

Downwind, the gennaker alone measures 1,838m2 and weighs nearly a quarter of a ton. This beast of a sail is stowed on a two-metre diameter drum, made by Baltic and recessed into the foredeck. However, the headsail furling systems are supplied by Reckmann and while the boom is another custom build by Rondal, with an innovative outhaul system, it too is powered by a Reckmann hydraulic drive.

‘This was the third Pink Gin equipped with Reckmann systems so there was no need to tender for the project,’ says Reckmann chief executive Marcus Schuldt. ‘The owner has always been happy with Reckmann.’ And even for a yacht of this immense size there was no need for custom made furlers. Standard products whose reliability has been proven over many hundreds of thousands of sea miles were available off the shelf.

The two headsails are set on Reckmann RF90-6.5 hydraulic furlers, which are designed to be virtually maintenance-free and should give decades of reliable service. Key features include spiral mesh gearing, sophisticated bearing design and a self-braking worm gear, which collectively ensure quiet and smooth running while meeting the highest industry standards. An easy-to-operate hydraulic length adjuster allows precise trimming of the mast and sail.

The furler tack swivel rings have a double axial bearing, so heavy loads can be carried reliably. To avoid point loading on the bearings, loads are distributed using distribution plates over the whole bearing race. A floating tack swivel for the RF90 units is an optional feature which allows the jib luff to be tensioned independently of the stay. This is a necessary addition for sails that have a halyard lock.

Crucial for any yacht that ventures offshore, Reckmann’s unique manual drive provides the best possible back-up. When a standard winch handle is inserted, the drive disconnects and switches to manual operation. A sophisticated gear mechanism prevents sail forces from transferring to the winch handle, ensuring that the reefing system can be safely and easily (if laboriously) operated in any emergency.

Pink Gin’s furling boom, meanwhile, is powered by a Reckmann BFH-250 hydraulic drive. The entire unit fits neatly into the mast end of the boom, which means the weight on the end of the boom and its torque load are reduced. A high-performance clutch ensures smooth and safe operation, even when reefed. Reckmann’s unique mainsail foot-flattening function is integrated into the drive and the compact design allows for simple, cost-effective integration into the boom’s roller tube.

Baltic Yachts is of course happy to work with any rigging or sail-handling supplier that its clients want to use, but it’s interesting to note that most of the superyachts built by Baltic in recent years – WinWin, Liara, Canova, My Song, Mini Y, Nikata and the last three Pink Gins, to name a few – have been fitted with Reckmann furling gear.

Since her launch in 2017, Pink Gin has crossed the North and South Atlantic many times and logged 60,000 sea miles. Her captain James Morbey commands a crew of eight in cruising mode, 10-12 for offshore delivery trips.

‘We have sailed in up to Beaufort 8-9 but the worst was probably around Force 6 upwind as the sea state was a bad wavelength for the boat’s dimensions,’ he says. ‘This is often the way and depends on where you are in the world. But the boat performed well given these conditions.’

Close-hauled in 35 knots true with triple-reefed main and storm staysail, Pink Gin can maintain a true wind angle of 40 degrees and a VMG of around 13.5 knots, with leeway of around one degree, but motorsailing is often the preferred option. ‘As we have a significant fuel range we will often use our storm staysail with engine to safely navigate the conditions,’ Morbey says.

The key to managing a sailplan of this size is monitoring data. ‘Real-time data from load sensors are extremely important,’ Morbey says. ‘They indicate how well forces are distributed across the boat compared to design and are fundamentally important in managing the boat. We have load pins, load cells, pressure sensors, rigging fibreoptics and motion sensors across the boat that are constantly analysed, which does help determine sailing decisions such as trimming and reefing points. It is a lot of data and must be reviewed constantly to make the right decisions. It’s certainly different to the start of my sailing career where you could feel most forces as the loads were small enough to manage with winches and blocks by hand.’