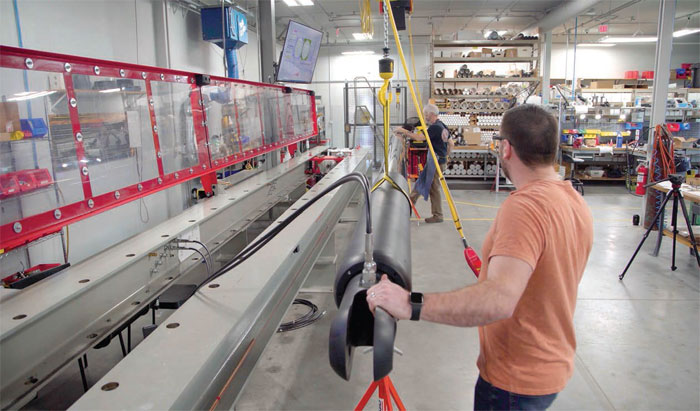 Dock talk is cheap and broken dreams are very expensive. When you need to replicate actual working loads, HarkenLab provides a solution.

When grand prix yachts gather in port it’s an opportunity for skippers and owners to check out the latest innovations on their rivals’ boats, and for crews to compare notes on how well the new stuff actually works. At the bleeding edge of sailing, new technology isn’t always subjected to rigorous physical testing in the controlled conditions of an engineering lab.

Only a few companies like Harken have the resources to build full-scale prototypes and design test benches that accurately replicate the complex, dynamic load cycles of a regatta or ocean race. It’s more usual for a new custom cylinder, winch or traveller design to go from finite element analysis to production and straight into sea trials, tentatively at first and then incrementally towards what has been calculated or estimated to be its theoretical maximum working load.

Almost everyone at the sharp end of sailing is well aware that equipment makers’ claims about performance and durability – and the opinions of other sailors – while often useful, should be taken with a pinch of salt unless they are backed up, validated and proven with real world test data. Dock talk is cheap and broken dreams can be deadly as well as catastrophically expensive. But in the absence of reliable data that would allow skippers and owners to make informed decisions, empty dock talk can sound as good as the truth.

So what’s the solution? For 20 years, many high-end grand prix teams have been working closely with Harken and renting its lab facilities to validate new custom equipment that they hope will give them a competitive edge. Their investments have helped the company to create HarkenLab, a suite of purpose-built testing facilities for new designs of winches, hydraulics, blocks, travellers and more, in its factories near Como in Italy and at Pewaukee, Wisconsin in the US.

The scale and scope of HarkenLab is unique within the yacht racing industry. Due to the Lab’s sophistication and wide-ranging capabilities, it has become a crucial R&D resource for America’s Cup teams and an increasing number of TP52, IMOCA, Ultim and superyacht campaigns.

‘It started at our winch factory in Italy where we wanted to validate newly designed winches and gearboxes for the 2003 AC,’ Harken’s head of grand prix and superyacht sales Mark Wiss recalls. ‘We’d always had apparatus to test equipment but what I was learning out in the field back then was that we were actually having a few things break. Through the need to do more endurance testing we came to the conclusion that we needed a really good laboratory – not just for grand prix and mega yacht equipment but for all our products.’

‘Creating the dedicated testing facilities in our new factory in 2006 was an important move,’ says Andrea Merello, the head of Harken Italy. ‘The test room was designed starting from a blank sheet of paper and then the rest of the building was designed around it.’ To replicate dynamic sheet loads on a winch shifting through its gears, a three storey tower had to be built for the long runs of rope and bungee cord that are required.

The factory built around the winch facility has to support immense loads: initially 20 tons on a single test bench and now up to 100 tons on the largest of three. A trench beneath the floor of the Lab turns it into a deck, where multiple pedestals can be installed and linked for a full simulation of a team of grinders on a very large yacht. All of Harken’s new winch designs are validated with an endurance test of zero to max working load over 1,000 cycles.

The HarkenLab Hydraulics and Hardware facility in Pewaukee has just introduced a test bench for cylinders and vangs capable of pulling up to 120 tons. There’s also a test bench with a pedestal for the rotary pumps supplied to AC yachts, IMOCAs and TP52s, plus dedicated facilities for other types or hardware such as blocks and traveller systems.

‘We recently completed a thorough R&D project on traveller car and track designs,’ Wiss says. ‘The car went through an endurance test at max working load, at high speed and high frequency to mimic how it is used on the AC75. The result is a new product called Flight Control, specifically designed for 50ft to 100ft foiling yachts.’ Recent R&D has also produced the Air Winches, V-Blocks, Fly Blocks and more. ‘Almost everything new from Harken goes through the Lab,’ Wiss says.

Creating and running HarkenLab, and upgrading it to keep pace with new sailing technology is a massive cost overhead – well over five per cent of turnover, Merello says – but it’s crucial for Harken’s business and a fundamental part of its nature. ‘We are custodians of this brand built by Peter and Olaf Harken over 60 years,’ says Harken CEO Bill Goggins. ‘We always first make sure the product is right and secondarily look at return on investment. Customers always get the best care and service, which you may not see on the balance sheet but might be the most important ROI.’

HarkenLab serves a dual purpose. As Merello explains, it is primarily used for Harken’s own R&D which encompasses everything from blocks and hardware for dinghies to captive winches for the world’s largest superyachts – and comprehensive ranges of hardware for every sort of sailing vessel in between. ‘We have 12 design engineers in the winch factory alone and ten of them are focused on pure R&D,’ Merello says.

However, the Lab and its highly skilled staff are also made available to Harken’s customers to conduct their own equipment testing and data gathering, and to work collaboratively on custom projects.

‘During the 35th AC in 2017, the Hydraulic Lab developed the high-speed up/down cylinder that moves the foil,’ Wiss says. ‘The team provided target speeds and a prototype cylinder was built and tested to prove the concept.’

‘For the 36th AC in 2021, the HarkenLab in Italy set a test to enable team grinders to validate the new True Clutch before it ever went near a boat. The setup included two pedestals linked to a winch and a hydraulic pump, using the True Clutch to divert grinder energy between winching sheets and pumping oil while never stopping grinding or adjusting their cadence.’

For the next AC – the 37th, in 2024 – Harken’s Hydraulic Lab has redesigned its rotary pump test bench to allow either a bicycle or pedestal to be used for evaluating the latest design. ‘Teams are invited to travel to Pewaukee to jump aboard and collect data,’ Wiss says. This data allows the team to better design their systems in advance of launching the boat, saving time and resources.’

An Ultim crew also used the Winch Lab facility recently. ‘They wanted to validate our nine-ton Air Winch for the new boat they were building,’ Wiss says. ‘They brought their trimmers and the ropes they were going to use. We simulated the manoeuvres: ease, pull, release. Then we sent them a full digital report with video, data on loads and efficiencies, all sorts of information that would allow them to feel confident that what they were buying was exactly what they wanted to have on the boat.’

What happens when cutting-edge equipment isn’t bench tested before it goes on the boat? In the run-up to the Deed of Gift AC match in 2010, BMW Oracle Racing learned the hard way. ‘They had winches from one of our competitors that were nicely designed but had only been put through their paces on screen with FEA and theoretical testing,’ Goggins explains. ‘In sea trials when tested under higher load the mainsheet winch was pulling final pinions and clearly not up to the grunt.’

‘The trimmers were quite scared about getting injured,’ Wiss says. ‘We’re talking big loads, 10-12 tons you’re holding in your hand and all of a sudden it’s backing up on you.’

Harken had already designed its own equivalent winch in a parallel R&D project, built a prototype and tested it. ‘We were able to invite the team to Italy, they brought their mainsheet and we duplicated the sailing environment in HarkenLab,’ Goggins says. ‘We helped them determine with confidence, with actual data, what worked and what didn’t. We showed exactly where we would expect something to fail on the bench so they could have confidence to push the gas pedal to that level and no further. At the same time we also established a high level of confidence that the winch we would put on the boat and ultimately win the AC with was the right solution. It wasn’t just theoretical, it was proven.’

That Oracle winch project neatly illustrates the value of HarkenLab and also more generally highlights Harken’s determination to always be at the front of new sailing technology. ‘Being deeply involved with every defender and every challenger of record for the AC and all these leading offshore projects, the fun thing is when they come with a blank sheet of paper and say they’ve got a new idea,’ Goggins says. ‘We are always ready for that and it’s what enables us to stay relevant and dynamic when it comes to getting solutions and working in partnership with these teams.’

You cannot be serious