Skip to content
You are here
Home > Advertorial > Harken: Trickle up 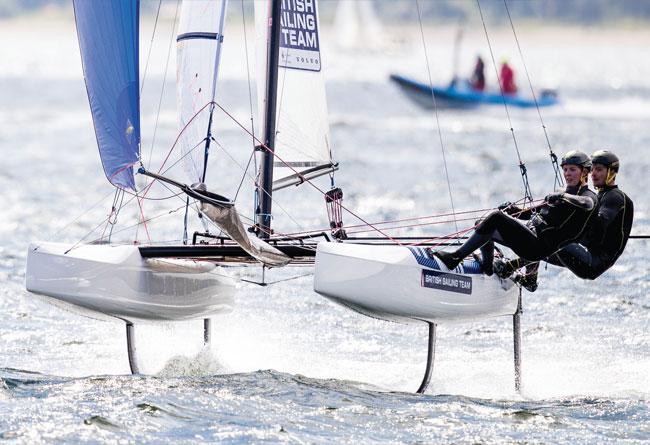 One thing that distinguishes the foiling generation from the rest is the flow of technical development often goes in the opposite direction from usual. Harken has been quick to embrace that.

The Harken process of developing new products usually follows a similar path: identify a market need, design, refine and engineer a product that fills it in a way no other does, then manufacture, package and launch. If the need stays big enough and the product performs well enough, you’re onto a winner. Now Harken are experimenting with a ‘skunkworks’ approach that fast-tracks niche products to help the world’s best sailors perform even better.

Literally and figuratively, grand prix and Olympic sailing classes move fast. And that has revealed development opportunities. So Harken have adopted a ‘quasicustom’ approach, to accelerate their product design and take those opportunities. The result is a growing suite of seriously niche products that execute on their design objectives well but are also specialised. Few sailors will need them but they will make a big difference to those who do.

The three most recent are the Harken Grand Prix (GP) mainsheet system for high-performance catamarans like the newly foiling Nacra 17 and F18s, the Harken Fly 29mm high-strength blocks, and an adaptation of the Ratchamatic block.

‘Design solutions often rise directly out of the feedback we receive from sailors who are competing at high levels and looking for that extra edge,’ says Harken design engineer and small boat product manager Matt Schmidt. ‘The conversation begins with a simple question: “What do you need to sail the boat faster?”’

One of the sailors looking for answers was two-time Moth World Champion, US Olympic Nacra 17 sailor and engineering graduate Bora Gulari.

‘I was trying to help my Nacra crew deal with mainsheet loads in the most efficient way possible,’ says Gulari. ‘As with a skiff they don’t get much of a break and the mainsheet load is typically higher on a catamaran, so my first response was “Let’s try to improve the mainsheet system.”’

‘The other thing was cleat adjustability,’ he continues. ‘The increments in which you could adjust the cleat angle were too large, so it was really hard to get the perfect angle to use the mainsheet cleat well. It’s not super-important for the crew, because they always have their hand on the mainsheet, but at important moments in manoeuvres it helps the skipper’s boathandling to put the mainsheet in the cleat and get it uncleated too.

Back in Pewaukee, Schmidt and his team put their blocks on a test bench, measured the efficiency of the standard Carbo blocks and said, ‘OK, we can do better.’ ‘Pretty soon they came out with their first prototype,’ says Gulari, ‘which was using standard steel bearings. As you can imagine, it did not last long but as soon as we started trialling, we said ‘We’re onto something here, what’s the next step?’’

The next step for Schmidt was to find the right materials. ‘We examined a variety of bearings and chose ceramic for the inner and outer race, and the ball bearings. The sheave is made from the same material used in Harken’s Carbo line of blocks.’

Gulari kept testing and feeding back. ‘We went through a couple of design iterations,’ says Matt, ‘and once we were happy that the efficiency was going up we looked at the form to see if we could improve that in terms of the size, getting the blocks closer together, and aero too.’

The result, for Schmidt, is genuine incremental performance improvement. ‘Every feature we’ve designed into this product offers on-the-water benefits. Number one is efficiency. This system is easier to trim so the crew can save a fair amount of energy over a stock system. Elite sailors notice this right away. For a development partner who competed in the Florida 300 distance race it meant the difference between trimming the mainsail all day with one arm instead of two.

‘The ease of trim also translates into smoother crew movements. For instance, in the Nacra 17, where most often the crew is the lighter, smaller team member, it doesn’t require legs or full-body lunges to get that extra bit of trim. This equates to less bounce and vibration at the mast tip.

‘Second only to efficiency is the compactness of the system. This applies specifically to the Nacra 17, where the pin-to-pin distance of the mainsheet directly impacts the maximum mast rake. By closing that margin by 75mm and getting the top and bottom blocks to nest together more tightly we effectively give the skipper a tighter leech and the option to put that much more rake into their rig set-up when needed in heavy air.’

Schmidt continues: ‘The new cam arm adjustment offers infinite settings. We replaced the holes with a slider track that can be adjusted for an ideal lead. The cam arm assembly is contained too, so there’s no risk of losing parts in a quick on-the-water adjustment. The system is serviced with a single 4mm hex wrench. Easy, low-hassle.

‘Development lasted about two years, but with many more iterations than in a normal commercial process. Eventually we had to have Bora commit to it in its then-current form for an important regatta. That was nerve-wracking!’ ‘The process was very smooth,’ adds Gulari. ‘I’ve been lucky in terms of enjoying a very nice relationship with them, but they work with anybody who wants to work with them.’

So is the GP mainsheet project wrapped? Not for Schmidt. ‘We always re-examine products and try to improve them. Potential changes may come from outside influences, such as improvements in rope technology or advancements in our other block designs – an example is the new Power3 family that offers different sheave profiles to handle a variety of wind and wave conditions.

‘Otherwise, if I had to guess, there will be requests to reduce the purchase in the system. Only the Nacra 17, F18 and Foiling Phantom use 10:1 and 12:1, so we may develop new trickledown versions of the same core product for boats with lower loads. Many would benefit from a low working-load, but high-efficiency block or purchase system. A-cats use 6-8:1. Plenty of dinghies have 4-6:1 mainsheets or systems that could use singles, doubles, beckets and so on.

‘As for the economics of it, for some projects the magic number is 5,000 units in the first year, and for others it’s 200. The bottom line is this: do we see thousands of GP mainsheet systems selling? No. Do we see it at the front of the high-performance cat classes, the Nacra 17 or F18 Worlds? That’s the goal.’

Harken’s new Fly blocks took less time to design, but they also emerged from a conversation with Gulari, this time as a Moth sailor. His feedback was that the wire blocks showed great durability but the efficiency was a little on the low side, and he was also getting to the blocks’ breaking strength, as he says: ‘I think that’s one of the things they like about me, I destroy a lot of stuff. With the Fly block they’ve matched every other block out there, and improved on some of the other designs with their attachment and the cheek design.’

‘The moth guys wanted a 29mm block that would be super-light, really strong and tailored for soft attachment,’ says Schmidt. ‘The Fly’s inner bearing race and the bearing balls are stainless steel, which makes the block run very smoothly, and stainless steel resists deforming. The outer race and the sheave are titanium. The 29mm block is an interesting case – a single new TP52 bought 56 of them. That tells me that there is a huge need for a tiny block that packs an impressive working load.

‘We have an 18mm version that has the same stainless balls and inner race, but works well at loads that don’t require titanium. Soon there’ll be a 40mm version that can be used in cascades on big boats like Fast 40+ boats and TP52s.

Harken’s commitment to accelerated evolution in the existing product line comes across neatly with the new HTE (High Threshold Engage) Ratchamatic. ‘This is a simple adaptation to a regular 57mm Ratchamatic block, that we made more robust by putting in a stiffer spring,’ says Matt. ‘Some skiff sailors wanted the ratchets on their kite sheets to stay free-running longer before the ratchet function engages. They wanted to be able to rip in the new sheet without inadvertently engaging the old weather sheet’s ratchet. That was an easy accommodation to make, but it’s an example of the same way of thinking. Harken will sometimes build all new products… other times tweak what we have to really fit the way sailors want to sail.’

For Gulari that’s a huge plus. ‘I’m a tinkerer and I want to make things as good as possible. It’s nice to have a company that helps you out with that – instead of having to build it yourself, which was my motto! It’s a Harken philosophy that they listen to their customers and want to make the best products they can.’