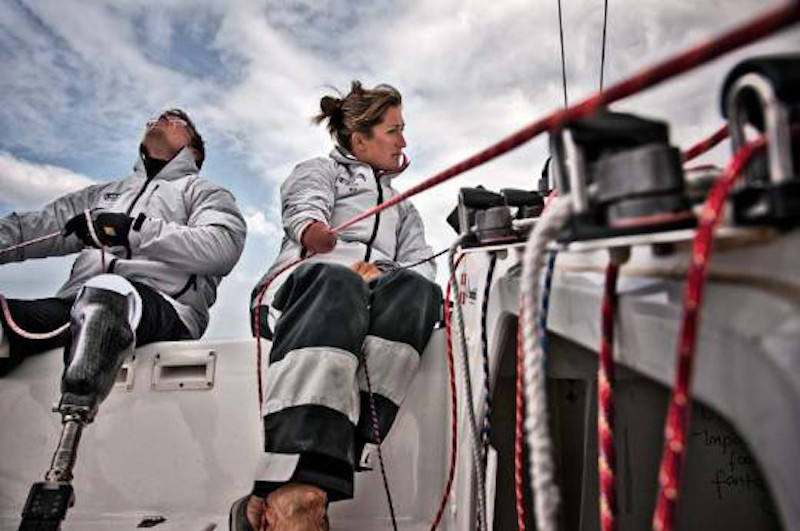 A great interview on the BBC website with British four-time Paralympic sailor Hannah Stodel about her plans to become the first disabled person to compete in the Vendee Globe solo race around the world.

“I am a strong person, I’m pretty tough stuff.”

You have to be, when you’re planning on racing non-stop around the world, on your own, in a 60ft yacht.

At face value, the Vendee Globe is a remarkable challenge. But for British four-time Paralympic sailor Hannah Stodel, it is a different beast entirely.

Born without her lower right arm, starting next year’s race would be Stodel’s greatest achievement – the “icing on the cake”, as she describes it.

Not only could she become just the eighth woman to attempt the prestigious unassisted race, she would be the first disabled person to compete – and the first “authentic single-handed sailor”.

“I met Ellen MacArthur in 1998 when she was in the run-up to her Vendee [in which she finished second], and she put the idea in my head,” Stodel, 33, tells BBC Sport.

“She was told she wouldn’t be able to do it because she was a woman and she was too small, how would she cope? But she breezed past all that and showed us all what was possible with a bit of self-belief.

“I really want to inspire people with the journey. If I can kick down these doors, other people can take on things that they didn’t think were possible.”

‘Are you crazy?’ – tackling the Vendee Globe

The Vendee Globe cannot be taken lightly. Described as the “Everest of the seas”, it pushes its sailors to their endurance limits and, to date, only 53% of those who have started the race have crossed the finish line.

“You get two reactions. You get the ‘are you certifiably crazy?’ or the ‘wow, that’s pretty cool’. It’s mostly the latter, especially in the sailing community,” Stodel says.

“Even some of the greats – Ellen, Sir Robin [Knox-Johnston] and Mike Golding – all these people are coming forward to help and offer advice having done the race.”

Stodel has mostly competed as part of a three-person team, but the Vendee Globe would see her very much on her own.

As a result, her boat has had to be adapted to suit her needs…