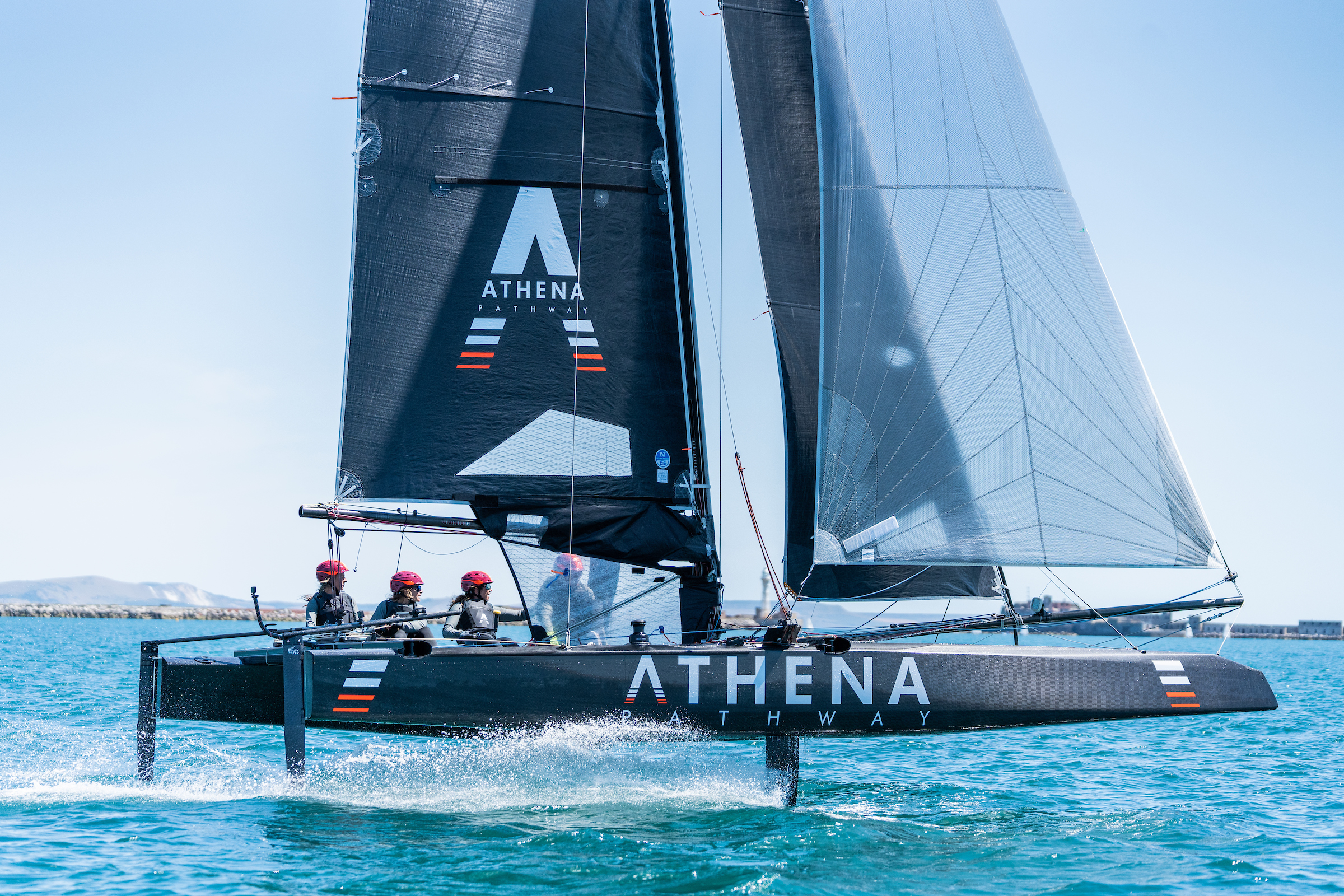 Hannah Mills OBE and Sir Ben Ainslie, the most successful female and male Olympic sailors of all time, have today announced the formation of the Athena Pathway Programme, a new pathway for female and youth sailors which aims to level the playing field in high-performance foiling sailing and bring diversity into the professional sport, with sustainability embedded in its core.

Speaking from the launch event at the Royal Yacht Squadron during Cowes Week, one of the world’s oldest regattas, Hannah Mills set out her vision for the future of high-performance sailing:

“Sailing has made great strides forward in gender equality in recent decades, led by the Olympic side of the sport where gender equality has now been reached on the water, but the professional side, particularly in high-performance foiling sailing, is far behind where it needs to be.

“We as a sport are uniquely placed to drive huge global change when it comes to gender equality. High-performance sailing has no major barriers to physical entry and through the Athena Pathway we will create a gender equal pathway for all, with sustainability at its heart.

“I am incredibly excited to be teaming up with Ben on this project to change the landscape of professional sailing in the UK. Young girls are already coming up to me excited by the potential opportunities within the America’s Cup, SailGP and beyond as they get older, which is amazing to see. Equally, however, the knock-on effect this could have in terms of growth within our sport as more females see career opportunities within the marine industry could be huge”.

The immediate objective of the Athena Pathway Programme will be to fast-track development of female athletes into high-performance foiling sailing, including both SailGP (working closely with SailGP’s Women’s Pathway Program) and the America’s Cup.

The team has recently purchased a 26-foot ‘Easy to Fly’ foiling catamaran with the training base primarily based out of the 2012 Olympic Venue, WPNSA, Weymouth, UK. Initial recruits to the team include Hattie Rogers, the SailGP Inspire x WASZP champion, and Sophie Heritage, who joins the team on the shore side.

Beyond the sport the Athena Pathway will aim to equip individuals with life skills for success whichever direction their career may take. Hannah Mills is an IOC Sustainability Ambassador and the Pathway has been founded with the pillars of ‘People, Planet and Purpose’ to educate and empower athletes on the role they can play in environmental responsibility. Mills expanded:

“Throughout my career, I have been incredibly lucky to have travelled the world competing on a global stage in my sport. However, I have also witnessed how bad the pollution crisis has become and the severity of damage to marine life – entirely caused by us.

Seeing this devastation, ignited a passion within me to use my platform as an athlete to raise awareness and encourage greater scale change within sport and beyond sport. We are seeing more and more how powerful the voice of athletes can be in driving real change and it’s crucial we educate the athletes of the future how best they can use their voice and hold the leaders of our industry and governments to account.”

To date, the opportunity gap in professional sailing has not solely been on the water. Over the past years competing in America’s Cup and SailGP, it has been clear to Ben Ainslie, who will be advising the Athena Pathway, that there’s a significant amount of work to be done on the shore side too. Ainslie added:

“When we first launched our official charity, the 1851 Trust, in 2014 one of our key ambitions was to bring more diversity into the marine industry in this country. We are still doing that at the grassroots level in schools across the UK, but now, through the Athena Pathway, we hope to be able to offer significant experience and opportunities, at the highest level of our sport, to further achieve that ambition.”

Fans attending Cowes Week this week will be able to see the Athena Pathway ETF26 foiling catamaran stationed near the Royal Yacht Squadron. The first opportunity to see the team race will be in the Grand Pavois Foiling Event on September 27th in La Rochelle, France.