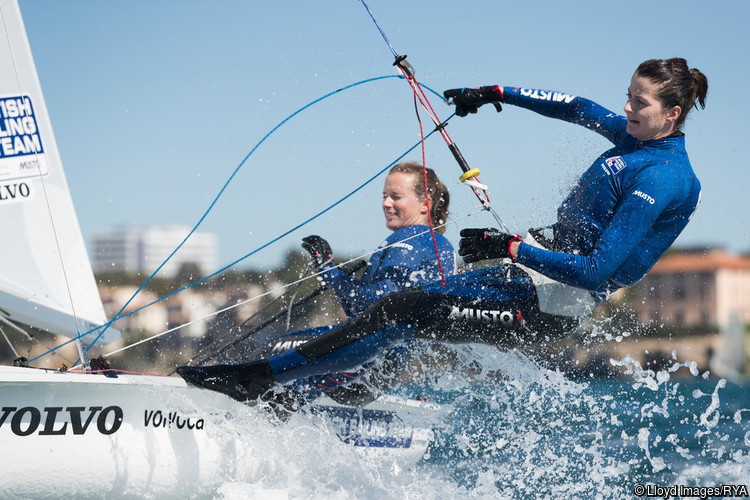 Over the last few days many of the athletes competing at the Tokyo Olympics have started to make their way out to Japan for the first time since 2019 to unpack their containers and re-familiarise themselves with Olympic waters prior to the first races starting on the July 25.

The excitement is already palpable for the national teams and the individual sailors and the Olympic regatta in Enoshima promises to be an amazing event to follow.

We’ve discussed previously how the build-up to the sailing events has been so different to previous Games.

With no access to Enoshima Harbour since the start of the pandemic and with sailing being such a venue dependent sport, teams would have typically been continuously collecting weather data from the beginning of the cycle to ensure that they are best prepared for this pinnacle event.

Many of the athletes from countries with cooler climates have had access to heat chambers to do their physical training in, in order to fast track their adaptation to the humidity expected in Tokyo as they were unable to travel out early enough to truly adapt while they are out there.

The heat and humidity, even on the water can have a significant impact on nutrition and hydration strategies, recovery and perhaps the most important factor for racing; the ability to make good decisions under pressure.

Thanks to advances in sports science and medicine, it has at least been possible to re-create some of the expected conditions, but there is no doubt that not only the 12-month postponement but also the challenges surrounding the lack of access to the Olympic venue has had a huge impact on preparations for all of the athletes.

Let’s take another look at the medal hopefuls in a few of the classes.

FINN
There are plenty of big names who we will expect to challenge for the podium in the men’s singlehanded Finn – but this class might also throw up a few surprises. Nicholas Heiner (NED) will be looking forward to his first Olympics after narrowly missing out on selection for Rio 2016 in the Laser class. Unlike some of the others in this class, he hasn’t had the distraction of America’s Cup racing and so has had time to perfect his Finn techniques.

Combine that with his big fleet Laser racing background and I would be surprised if he wasn’t up there fighting for the medals. He has some tough competition though, particularly as this will be the last outing for the Finn at the Olympic Games.

Zsombor Berecz (HUN) finished fourth at the Finn Gold Cup this year and with the NZL Selection going in the favour of Josh Junior, there will be one less Kiwi trying to get on the podium at the Games compared to the latest World Championship. Joan Cardona (ESP) also put in some impressive performances this year to not only secure his country’s national qualification, but he also won a silver medal at the Gold Cup.

ILCA 7 (ex-Laser men)
The ILCA 7 class has to be one of the toughest to call, with boat speeds particularly upwind being so similar, medals will be won by those who not only come up with the best strategy but are also able to execute it.

Those who have had access to a large training group and had an environment where they can practice bigger fleet decision making will undoubtedly have an advantage but there are so many who have won medals over the course of this cycle at world championship and World Cup level – plus previous Olympic medallists – that it will be a fascinating class to follow.

We couldn’t talk about this class without mentioning Robert Scheidt (BRA), who at 48 seems to still be in great form. The five-time Olympic medallist finished second behind current world champion Phillip Buhl (GER) earlier in the year at one of the only events on the ILCA calendar in 2021.

ILCA 6 (ex-Laser Radial women)
In the ILCA 6 class, Anne-Marie Rindom of Denmark has been dominant in many of the events she has taken part in this year, amassing a lead of nearly 40 points in one of the best attended Villamoura events earlier in this spring.

Manami Doi of Japan has also had some impressive results and the excitement of a home Games, as well as the possibility that she has had access to the Olympic waters during this time should set her up in good stead to be in with a chance of a medal.

Reigning world & Olympic champion Marit Bouwmeester (NED) has been recovering from an injury but with so many years of successful campaigning behind her, if she is fully recovered then I would definitely expect her to provide the toughest challenge for Rindom to take that gold medal.

With proven pedigree on Olympic waters, Emma Plasschaert (BEL) – winner of the 2019 Enoshima test event – could also be one of the contenders to watch out for.

The rest of the top 10 seems very hard to predict so we can probably expect some high point scoring racing as the fleet battles to acclimatize to the conditions throughout the series.

470 MEN
The 470 men’s class has been missing one of the top teams all of this year, after Matt Belcher and Will Ryan opted to stay in Australia to train and therefore miss out on the opportunity to race with the rest of the fleet.

The Swedish pairing Anton Dahlberg and Frederik Bergström have both the championship experience and the current form to be confident of a good result, while Spaniards Jordi Xammar and Nicolas Rodriguez seem to have prospered during the extra time the postponement of the Games has given them to prepare, and this appears to have put them in a good position to challenge for a medal.

470 Women
For me, this will be one of the most interesting classes to follow. Hannah Mills (GBR) has the opportunity to become the most successful female Olympic sailor of all time if she medals at her third consecutive Games along with her crew Eilidh McIntyre who is making her Olympic debut.

After winning the 2021 world championship the young Spanish pair Silvia Mas and Patricia Cantero must be the favourites to take gold. The extra 12 months of preparation has given them time to work on some of those areas where they lacked experience and, providing they can settle into the venue well, they look very hard to beat.

Having said that, this will be their first Olympic Games and it’s entirely possible that a more experienced team will have an advantage when it comes to being under the pressure of the Olympic spotlight.

One such duo is France’s Camille Lecointre and Aloïse Retornaz, Camille is a bronze medallist from Rio and has been racing at the top of the 470 fleet for 10 years now and along with her crew Aloïse, they won the 2019 Olympic test event as well as the 2021 European Championship.

I cannot wait for the racing to start. This will be an Olympic Games like no other and there is no doubt that those who do come home with medals of any colour will be true champions after navigating such uncertain and challenging circumstances.