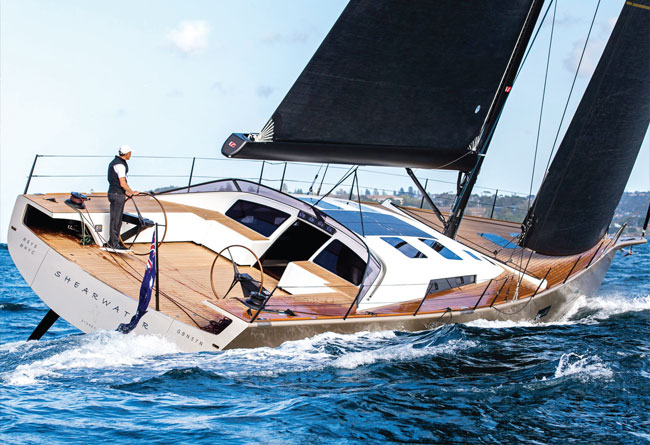 When looking around a modern performance yacht for some nice aesthetic details the furling boom is not usually the natural place to start – not any more however.

Furling booms are not new to cruising, but modern performance cruisers can challenge even the cleverest spar designer. They demand not just ease of use, reliability and reasonable cost, but also low windage and weight, the ability to shape the furled sail effectively to suit the conditions and compatibility with existing spar systems. It’s a lot to ask but Hall Spars has the solution.

Hall Spars had already met this challenge with its range of high-end furling booms for yachts from 50 to 150ft but saw a hole in the market for the owners of mid-sized yachts who wanted a premium product without the premium price tag, which led to the development of the Legend Series booms.

The Legend Series took many of the components and systems that had been honed over many iterations in the superyacht world and shrunk it to suit the size and price point of yachts from 45 to 65ft. Yachts in this size bracket needed a furling boom that was sleek, stylish and, most importantly, had proven performance, reliability and ease of use. These boats are often sailed by a husband and wife team who want to be able to relax while sailing, knowing that if it gets a bit windy they can reduce sail quickly and reliably without having to leave the safety of the cockpit or even the helm.

A finite element analysis by the Hall technical team proved that on smaller yachts a monocoque construction would suit a furling boom just fine. The righting moments and mainsheet loads of yachts in the 45-65ft range meant that they could do away with the internal structural shelf that was one of the most time-consuming parts of constructing the larger booms. Doing so meant that a little more carbon was needed in the shell to handle the sailing loads, but it removed a massive amount of construction hours – and therefore cost – from the build.

Larger Legend series booms are built from pre-preg carbon fibre with lightweight Nomex cores and then cured in an autoclave to ensure the ultimate laminate density and strength-to-weight properties.

Another blessing associated with smaller yachts is that the shorter mainsail foot lengths and reef loads meant there was no longer any call to have the upper edge of the boom supporting the mandrel when the sail is reefed. So the upper edge of the boom and the roller supports were removed, which further reduced construction time and also eliminated contact between the sail and boom shell, a source of chafe.

Starting with a fresh sheet of paper, Hall Spars approached the fittings that integrate the boom into the mast from a different angle. These booms were designed to be easily retrofitted to yachts with any type of mast, so aluminium goosenecks and sail feeder ramps were used, making installation a case of putting in a few fasteners instead of bonding carbon parts onto a mast.

Drive mechanisms are available with components from numerous suppliers, including Hall Spars’ proprietary manual drive as well as hydraulic and electric drive options. Reefing locks come as standard. Reefing can be done at any batten by furling the main down to the desired height, engaging the lock, and re-tensioning the halyard. Job done. Reef locks are particularly crucial for the manual furl system, as most other manufacturers rely on the furling line in theory not slipping on the furling drum, which in practice is not reliable at all.

Furling units are placed at the outboard end, which differs from other manufacturers in this size range who prefer to keep the weight at the inboard end. With their customengineered lightweight shells, Hall Spars locate the furling system at the outboard end of the boom to make them fully accessible for service or troubleshooting by removing just a few bolts. This is in contrast to having the system hidden inside the mandrel at the front, which requires removing the sail and unhitching the mandrel to gain access to the drive unit: not something you want to do at sea.

Most of the load in a mainsail is down the leech or trailing edge, so putting the furling drive outboard means a more direct transfer of the torque generated by the furling drive into the most highly loaded part of the sail rather than passing it down the length of the mandrel or across the sail. Direct transfer of the load then means less material is required throughout the shell so the weight penalty of moving the drive unit outboard is thereby negated.

Finally, if the boat loses hydraulic function or electrical power, a ratcheting spanner can be used to turn the mandrel manually. An alternative to this is an emergency ratcheting furling drum that can be bolted to the front of the mandrel.